Adorable Photo Series Lets You Look 'Up' to Shelter Dogs

Nothing beats cute like cute with a cause, which is exactly what Slovenia-based photographer Katja Jemec did with her adorable photo series, "I Looked Up and There You Were."

The images are being used to promote awareness of abused, neglected, and abandoned dogs across Europe. Each pup has been photographed literally from the ground up to show them from a unique perspective that flies in the face of how we might normal see stray animals. These heroic images are sure to leave a smile on your face for all the right reasons.

Jemec writes on her blog:

Overcrowded dog shelters, lack of food, and space have been a pressing issue for quite some time now. In Slovenia alone, thousands of dogs are admitted to animal shelters each year, and the situation south of the Slovenian border is even worse due to a large number of stray dogs. Although castration and sterilization are a cheap and easy method of reducing the number of unwanted puppies, people still rather leave the little ones on the streets, starve them out, or shoot them. Some pups manage to get saved and come to a loving home. But they do not escape the consequences – the fears – and their owners work hard to overcome it. The series of photographs comprises portraits of dogs that have achieved that and their stories. 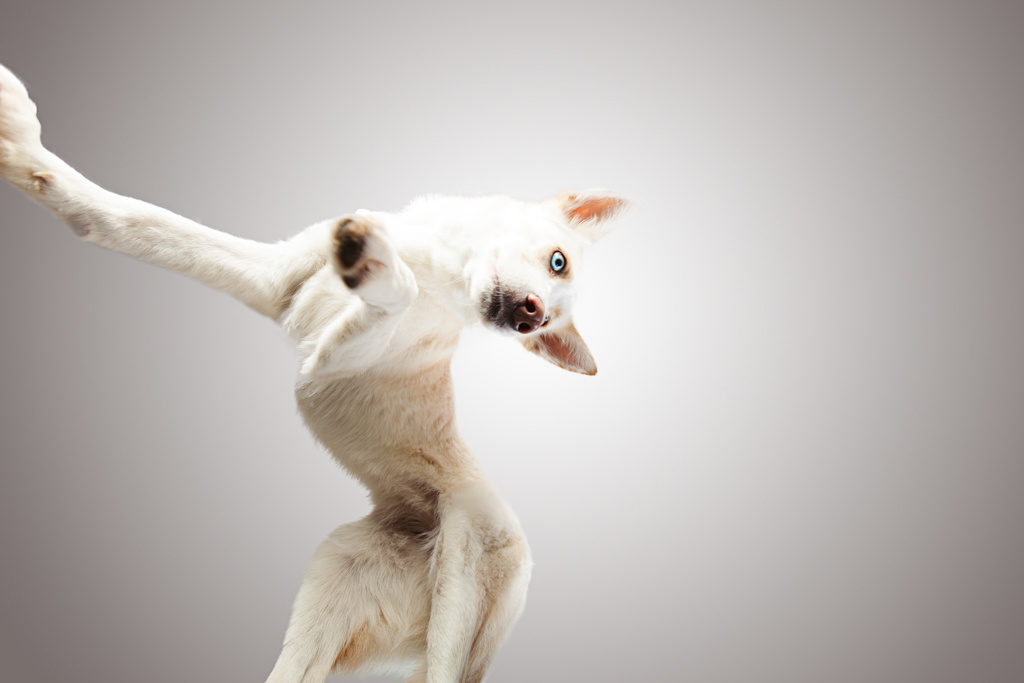 Her passion for tail-waggers of all types is evident in the images, but also in the personal stories she shares for each of her canine subjects. Jemec describes the snowy white dog: "Tara has a mysterious past. She was found starved and has 'til this day a fear of men wearing a cap and carrying a shovel or sticks. It is assumed that she had been beaten several times." 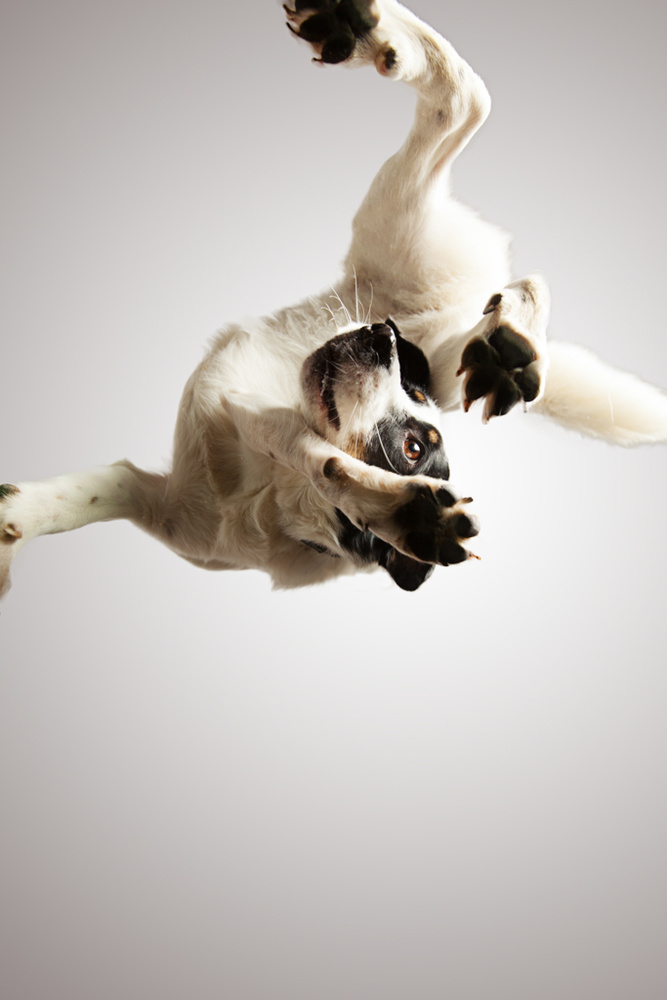 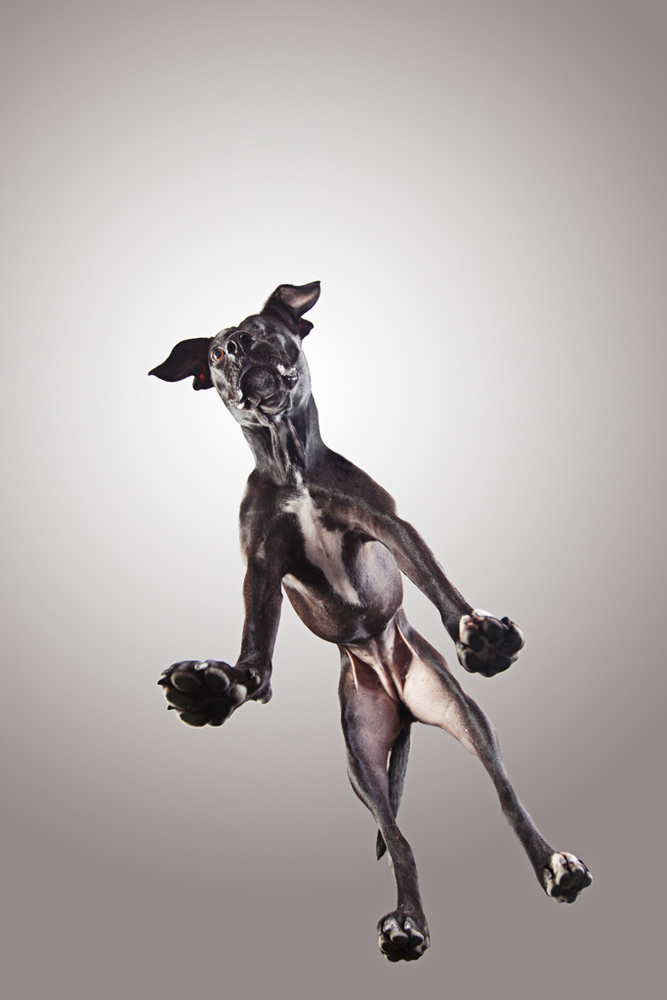 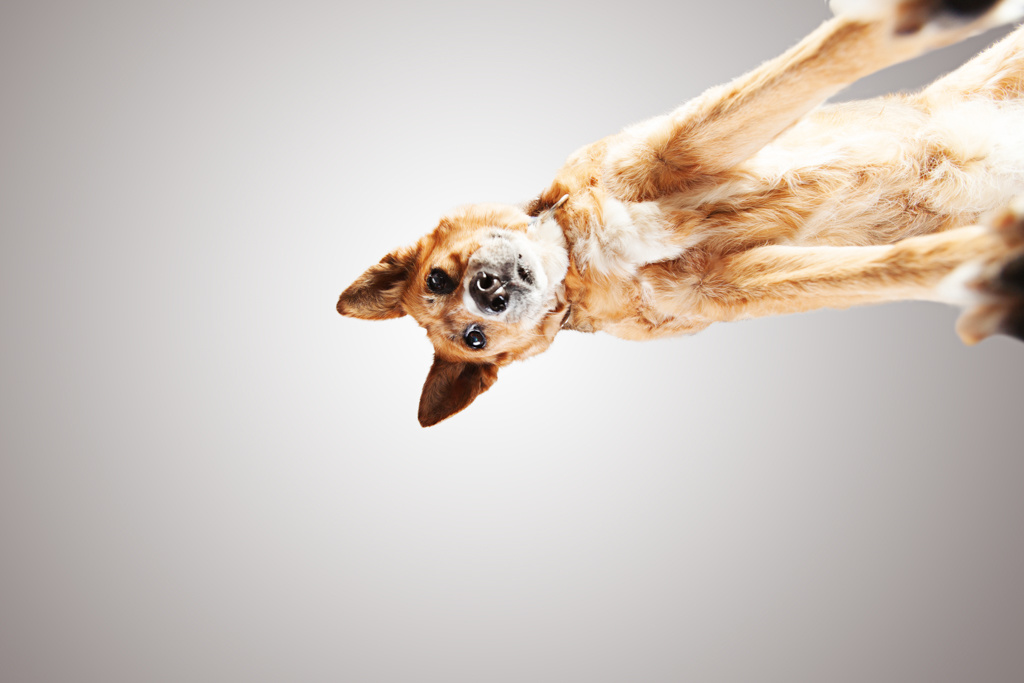 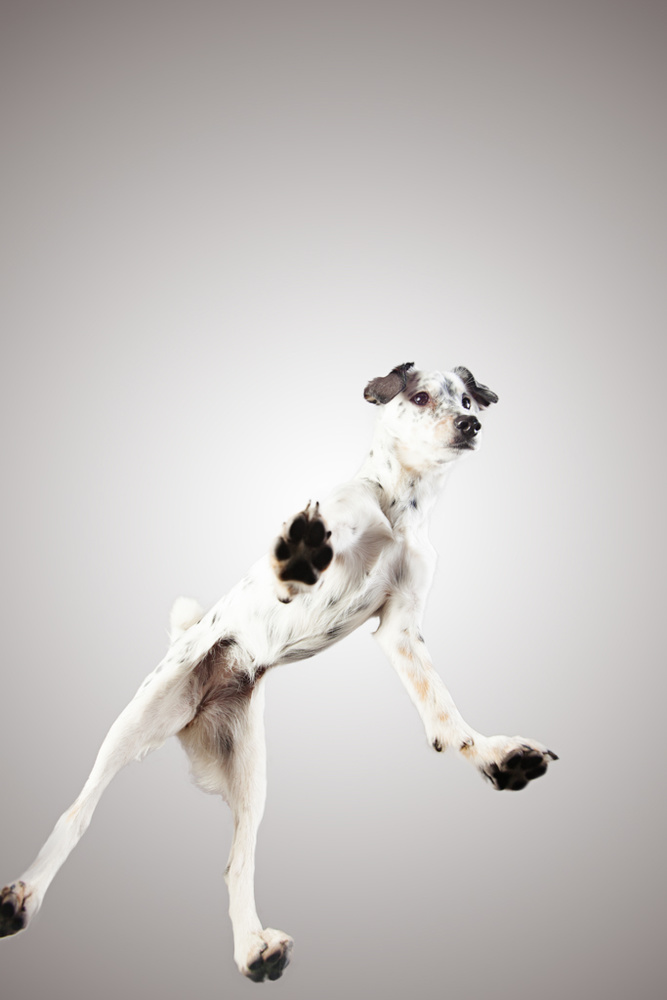 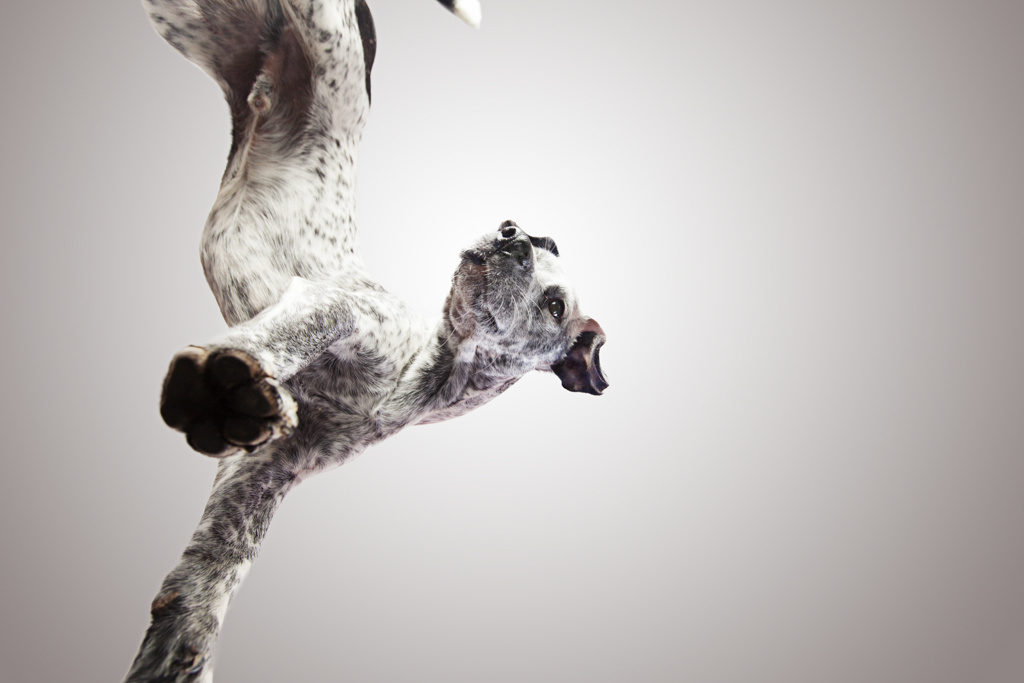 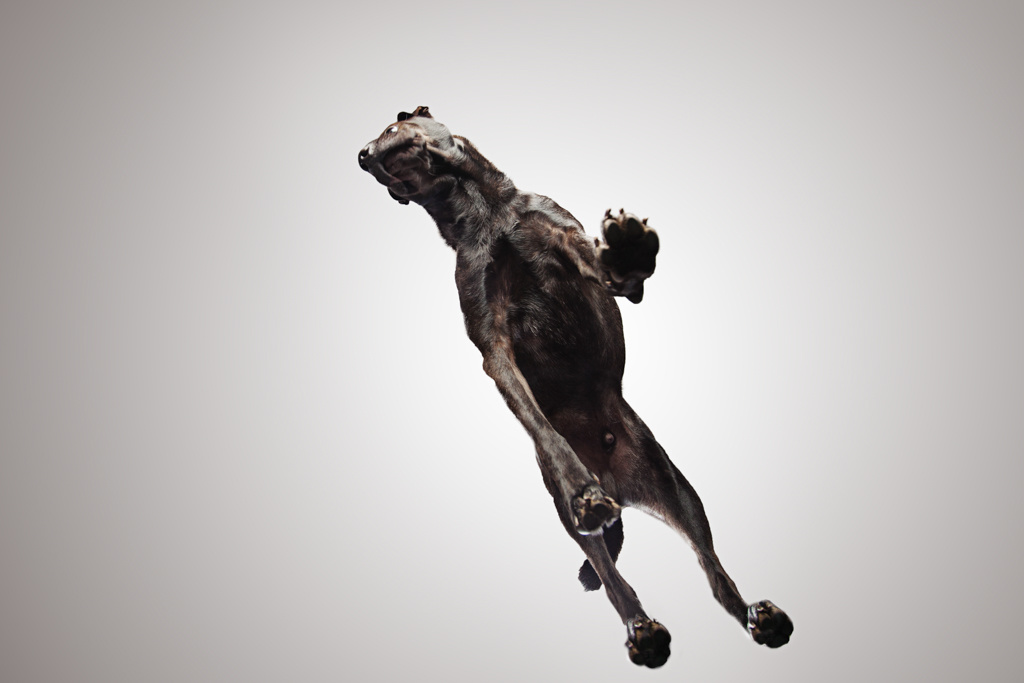 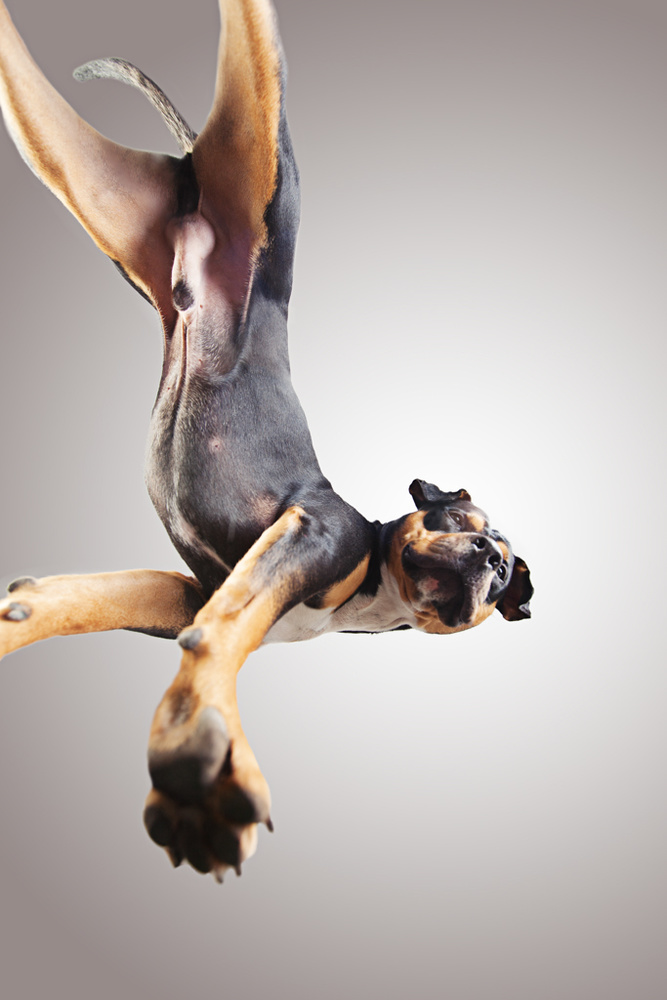 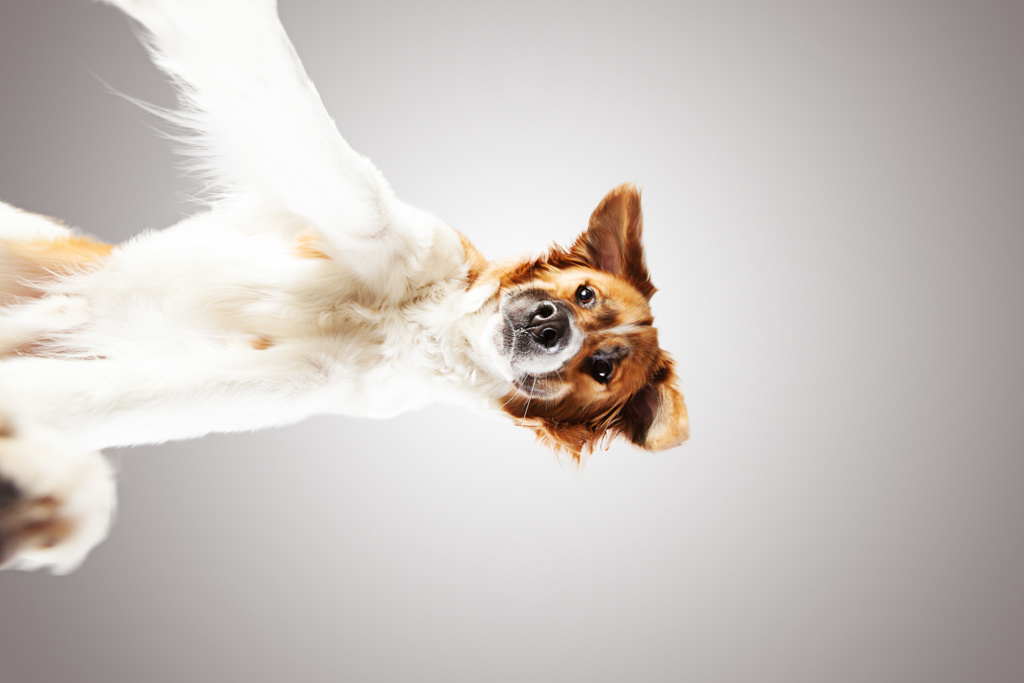 Each dog has its own tale, and thanks to this photographer, we'll all get a chance to share in them. See more of Jemec's work with dogs on her doggy-dedicated site. See the rest of her photography on her site or on Instagram.

All photos used with permission of Katja Jemec. 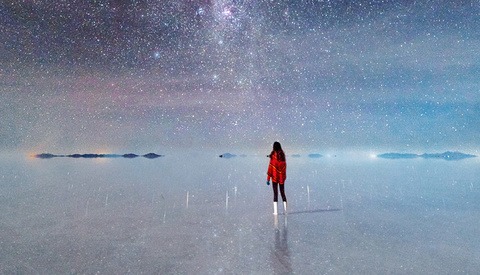 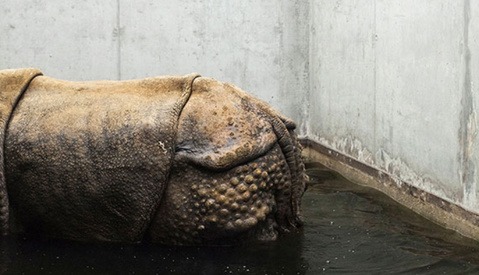 Sorry dogs aren't "wild". They have been domesticated for thousands of years.
A dog is also a sentient being, we don't own them, we are their "guardians".

Sigh
Do a little research first please.
Domesticated dogs are just that, domesticated. Wild dogs, dingoes etc are not.
Yes, their actions can be predicted with observation.
We rescue animals including dogs, I speak from experience.
Move onto photography or something else suitable for this forum.

Replace dog with human and let me know if you can "predict" them any better.

Go read a book
And don't yammer on about subjects you have no knowledge of.
Thanks

tired of this trolling, I'm going out to walk some dogs and enjoy life.

You constantly like to use your film background as an appeal to authority to get people to put more stock into your crusade against film. Well in this case, you have an expert in dogs, and now the anthropologist sitting here next to me telling you that you literally don't have the slightest clue what you are talking about.

Dogs are domestic...not wild. They have genetic and physical traits that separate them from wild animals.

You are beyond ignorant and really need to stop....you are flat out wrong

No, you haven't, and yes, you very much so are.

Pete - I'll have to assume you're a postman, but I know you're a douche!

There are more factors which play into it, but typically, dog bites and so-called attacks are predictable. If people would bother to learn to communicate properly. Dogs are actually much more civilized than humans in most cases. If you give them a chance, you might realize that they are actually incredible, but they are also dependant on humans.

They are a man made species. They are not wolves and are very different from them in many ways. Many also have a social instinct which drives them to seek out human interactions. There's a reason some dogs make better service dogs and LOVE their jobs.

By your reasoning and logic, humans are the same as primates. And people are also uncontrollable and unpredictable because there are countless acts of disobedience and violence daily and hourly. Rape, harassment, extortion, beatings, murder, not to mention mental and psychological abuse.

I find it hard to take information as fact from sources which seem to have a clear lack of understanding through first hand knowledge. I will certainly listen to the opinions generated, but they tend to be missing a whole range of important details which can only be gleaned from an open perspective.

For my perspective to be open, I must consider that perhaps dogs could be each and every one of the things you state about them. Or, that some of them might possess some of the characteristics which you have noted. So I must be able to understand when and why each of those traits is being perceived. I must further question whether there are other circumstances in which those traits appear. The difficulty is that it's quite clear that you are not familiar with dog behavior and therefore are unqualified to make those same unbiased observations.

I don't know where you are pulling your statistics from either, but I find it hard to believe that there are deaths from dogs daily. But I do hear from many teachers about incidents where they have been bitten, hit and kicked by their students. And since it only takes 365 incidents to make such an occurrence equate to "daily", it wouldn't surprise me if there were daily occurrences of these wild and uncontrollable outbursts.

There are different types of barking. Sometimes it is merely talking, other times it is yelling. It can be compared to humans and humans do react equivalently.

Some humans speak loudly, some have a tendency to raise their voice and lose control of their temper instantly. We are currently living in a time in society where humans are reactive (over-reactive) to the slightest stimuli and choose to be offended. I have had many more humans yell at me than I've had dogs bark at me in a menacing way. Humans will charge and attack without prevocation. Whether you want to admit it or not, there IS equivalent behavior in humans and it's much worse in humans. In my CITY alone there were 33 murders in 2015 and 30 in 2014. In the entire USA, there were 34 dog realted deaths in 2015 and 42 in 2014. And so far this year in my city there have been 60 shootings. That is MUCH more violent and prevalent than dog attacks.

You are flat out wrong about your belief that a significant amount would bite, maul and/or kill for any reason.

I do feel however that there are a number of irresponsible owners. Dogs should not be left outside to bark and annoy others. In dwellings with shared walls, floors and other adjoining structures there should also be measures taken to minimize noise transmission and annoyances. So many people are so inconsiderate, but that's not the dog's fault, that's the owner's fault. Just as there are many cases where owners won't admit to themselves that they need help training their dogs, they don't want to pay the incredibly reasonable cost for a trainer, or they don't want to put the time and effort into training. These people don't deserve to have a pet. A pet isn't property, they are living, breathing, thinking, feeling creatures.

Regarding unsanitary, that would be a matter of opinion. I find many men to be rather repulsive creatures but I'd still let them inside my home and have even been known to clean up after them out of love in a past life. Men have been smellier, harrier, more ill-mannered, dragged more mud, sludge, dust, dirt and debris into the house than the dogs have.

But all of this is moot. Getting back to your initial statement with regards to dogs being returned to "the wild". I don't think that you would prefer that to their domestication. They wouldn't retreat to the forests and grasslands. They would continue to hang around close to humans. So if nobody were allowed to shelter and care for dogs and they were allowed to fend for themselves and reproduce in the "wild", then their numbers would grow unchecked, they would become a nuissance in the streets and it would be a serious problem trying to control them.

It's obvious we're not going to see eye to eye on this one. I feel sorry that you're unable to enjoy how wonderful dogs are. One of the most amazing things about them is that even if they have been abused by man for years, they are still able to let it go and find a way to trust humans again and see the good there is in the world. Whereas humans have a much more difficult time letting go of awful experiences in their past.

Most dogs don't bark, threaten, bite, maul and kill people, period. THAT should have really been the end of the story. But you wanted to treat it as the world being flat when truly it is round.

I even went to an anti-dog website to pull statistics and shared them with you. I didn't want to believe that dogs even did kill humans, but I was wrong about that. I'm not so close-minded that I'm uwilling and unable to see things clearly. However, 32 is not 365. And even 365, which would equal one person a day, does not equal a fraction of a percent of people who are in contact with dogs on a daily basis. But a very few people who are incredibly irresponsible are not the majority or even close to that.

It is very sad when people let their prejudices, fears, and other opinions get in the way of the absolute truth.

You have made so many wrong assumptions that it's not even worth responding to your presumptive points.

There's no need for me to think about someone's warped views of the world, other than to feel sorry for them. It has nothing to do with their enjoyment.

besides the moving story behind the work what do you guys think about the images. I personally feel at odds with images