Wildlife Photographer Willis Chung left a scary scene with the proverbial seven colors at Yellowstone National Park, when a 1-ton bison came charging right at him. However terrifying such an experience may be, he did shoot one hell of an image to support his tale.

Imagine staring a 1-ton bull bison in the eye when he's bent on charging you out of his territory. It's undoubtedly food for a story a 56-year-old photographer from Denver will tell for some time to come. Chung experienced a close encounter with a bison while on a photography trip to the magnificent Yellowstone National Park. The bull gave little warning before charging in his direction, when the photographer was forced to leave his camera equipment.

After a dance around the tripod that must have felt lasting forever, he was able to capture additional stunning images of the bull kicking up dust in his natural habitat. One shot that captures the imagination is of the bison approaching Chung's gear from behind, where it looks like the horned beast is having a look through his photos on the LCD screen.

Chung, an experienced wildlife photographer, commented that he has never experienced such behavior before. After photographing wild animals for 44 years, it's the first time that he stared a bull in the eye with this intent in Yellowstone National Park.

Did you have any "close calls" with nature on your shoots? I've had a large group of curious wild horses sneaking up on me while shooting the night sky, a blind step next to a viper and lightning hit the very spot I had my tripod a few minutes ago. No pictures of any of those incidents though.

Landscapes / April 28, 2019
The Stranded Photographer: Making the Most of an Unexpected Stay in Arizona

I told you not to wear that red t-shirt to Yellowstone. Torero.

I would be scared. And with my bad knees, I can't even outrun a snail.

The bull clearly just want to see its picture taken.

He's just checking the guy's not shooting him with a Canon/has the latest firmware installed :-0

he was checking the bokeh!

That wasn't a charge. He was just coming over to sign his model release.

Maybe he wanted to see if it was that new Nikon 500mm 5.6 fresnel lens.

When your model wants to start chimping.

I had few close encounters with nesting birds on Iceland and Faroe Islands. Apparently, during nesting season they don't just fly away when you enter their territory. Instead, they're rehearsing to the sequel of The Birds, by Alfred Hitchcock. No kidding there. I had to run away few times and throw myself to the ground, covering my head from knocking it down by a 10 pounds bird. 😅

Never been that close to a bison, but I had an elk get pretty close once. This was shot in Rocky Mountain National Park last fall. This bad boy was high on a hill just off the road, and I was shooting him with some long glass when he suddenly took off down the hill right at me. Knowing enough to not turn around and run, I just started backing up. Unfortunately (or fortunately, depending on your POV), I backed into one of the many cars parked along the road. I was forced to stop. I think he thought I was standing my ground, because he stopped, turned, and took off down the hill. This was shot with a 24-70mm f/2.8 lens. He was that close. Too close. 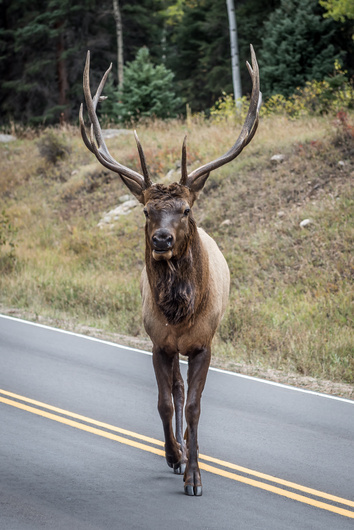 Maybe a silly question, but are they aggressive and dangerous?

When I was in bostwana (2011), this Young elephant tried to get close to the vehicle. The worst part ? I was on the tracker seat :D Strangely I wasn't afraid, maybe because I don't have any choice that to stay there and still. Anyway I'm here and safe ;) 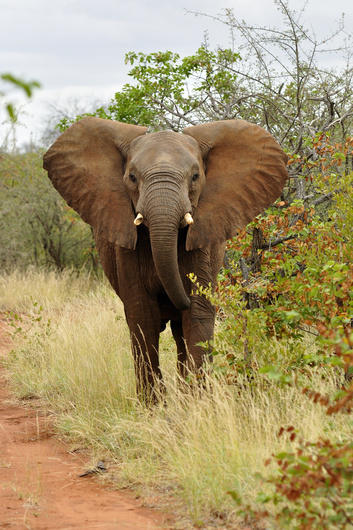 Elephant said to mum that night: Mum, I scared the shit out of a tourist. He had to change his pants.
Mum laughs and says: naughty boy.

I had a lot of "evil eye" stares over the years, from bisons at yellowstone yes, or kangaroos, cows, although the most terrifying was from a musk ox in Norway. But none of them charged me. Plenty of birds dove at me in Australia though, there are quite a few very territorial birds there. 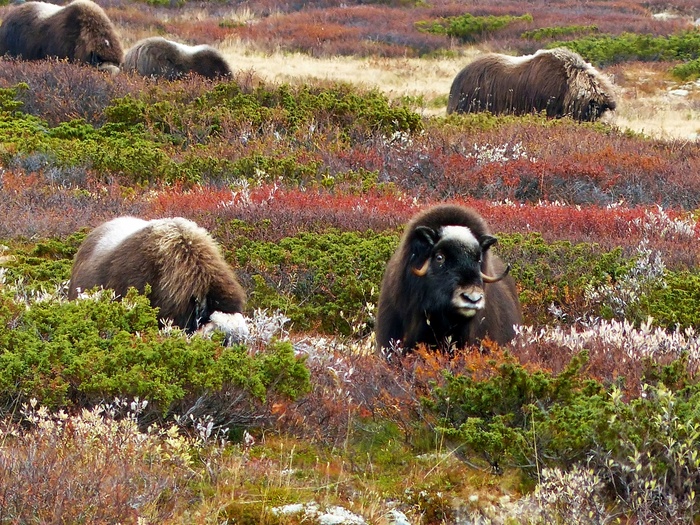