Get To Know Urban Exploration Photography: A Guide To Shooting Abandoned and Off-Limits Territory

Get acquainted with Urbex photography as we chat with the Nikon-endorsed photographer who has travelled the globe to visit the best abandoned spots in the world.

Meet David de Rueda, an Urbex photographer from France, who visits some of the most surreal locations on earth for a living. Being largely a portrait shooter myself, I wanted to begin our chat by inviting de Rueda to help define what Urbex Photography really means to those of us that lack familiarity with the genre. “To me, Urbex is not only about photography,” he tells me. “It’s [about] getting into places you don’t ordinarily get to visit. What I’m looking for is interesting atmospheres, places which are unique. Think abandoned buildings, rooftops... [places that make] you really feel like you are in a parallel world and there’s no one but you.”

De Rueda first got into Urbex photography back in 2006, at a time when he says he “didn’t know there was a name for it.” Curious for adventure, he made his way inside some abandoned buildings. Citing that as the day he become hooked on Urban Exploration, he’s never stopped since. But Urbex photography doesn’t come without risks.

Often, many of the abandoned locations aren’t safe. There’s no one to take care of the place. You have to be careful what you put your feet on, for example. You should take your time to discover and enjoy the place before you take any pictures. You have to get the atmosphere first.

Something de Rueda is adamant about is leaving the sites he explores in the exact state he found them – one of several reasons he is secretive when I try to ask about some of the locations featured in his images. The point, he says, is to leave no trace - to just take pictures, keep the memories and that’s it. In order to do just that, he always takes time to find the easiest way into a location, sometimes having to ask for official access, otherwise some sites are simply "impossible" to access.

Equipment selection is also a big factor. Since you’re likely to find yourself often shooting in low light, de Rueda insists a tripod is absolutely essential. As a lot of locations are off-road and require long walks, minimal equipment is also recommended. De Rueda personally tries to manage with only one camera body, as well as two lenses (a wide-angle and a prime), a tripod, and a flashlight – the latter of which he sometimes uses within the photographs themselves, as you’ll see from his photo "The Lost Era," below.

De Rueda talked me through some of his strongest images. The first, entitled The Lost Era, looks like it was taken underneath some sort of UFO.

A former Communist headquarters, de Rueda recalls arriving at the location. Sitting atop a mountain, the building is accessed by a single road, which was covered by layers of fog this particular evening – something he says only added to the final image results. That’s not to say it wasn’t - to use de Rueda’s words – frightening; “We saw some photos online from inside but it was during the day.” Imprinted on the ceiling was a large Communist sign; the architecture was rural, a mix of concrete and steel. At first, de Rueda says he had no idea what kind of photo he would take, instead playing with a flashlight and the fog (“the perfect set-up!”). Ultimately, he positioned his subject in the centre of the room, capturing the scene over a 4-second exposure.

An abandoned rocket from the 1980s, Energia is situated “in the middle of nowhere,” in Baikonur Cosmodrome, Kazakhstan. The space de Rueda found here was a huge hangar, almost 100m high, that was home to a pair of abandoned space shuttles. Lined with transparent panels, de Rueda managed to light the building entirely with natural light. It’s a location he describes as “one of the top places in the world.”

The view in this image is one that de Rueda cites as a huge source of inspiration. A unique angle of an otherwise frequently-photographed monument, de Rueda set out to create a sense of scale by positioning a human subject matter on the bridge, with the city in full view in the distance. Keeping tight-lipped as I press about quite how he and his subject made their way to such a height, he coyly admits, “I wanted it to be an inspiring moment.”

So what about trespassing? De Rueda claims to never once have been caught out, or fallen victim to run-ins with law enforcement. Sure, it’s partially down to great luck, but he also tells me that preparation is key. Before any given shoot, he scouts on the internet, often using Google Earth and Google Maps to get an idea of the area he’s planning to visit. Even upon arrival, he stresses the importance of devoting time to familiarizing yourself with the location. From finding the best way inside, to ensuring you don’t break the law or accidentally vandalizing the space.

Two years ago, de Rueda’s epic urban landscapes were headhunted by none other than Nikon. The camera giant got in touch to propose one particular question: What is your dream photography project? Fast forward two months, and de Rueda was travelling Europe with the team, ticking off a series of off-limit territories from his wish list. He was able to pick what he describes as “places I was only dreaming of,” travelling from Italy through to Kazakhstan. He spent the entirety of the two month period after Nikon’s offer heavily researching interesting places to visit. Although he’s quick to heap praise on Nikon for how “easygoing” they were, de Rueda says he still felt pressure to not only locate the places, but produce epic photographs of them too. Having submitted his list, he now faced the pressure of there being no guarantee he would be able to produce the results. Making it to any of the places on the list wasn't a definite, as he was entering unfamiliar territory. “I was certainly pushed to his limits,” he recalls. But an absolute dream project, by any photographer's standards! 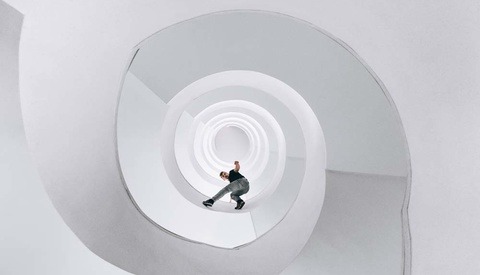 Business / March 22, 2017
As Billboard Magazine Unveil iPhone Cover, We Ask What It Means For Our Changing Industry

I am asking myself how one even does publish such a photo like on the San Francisco bay bridge without any fear of getting sued afterwards...

so Nikon sponsors someone that regularly breaks the law all over the world?

Enough of this "I'll do what I want" mentality with photographers.First it was the idiot parking an Audi R8 on the back side of a crested road blocking traffic and endangering not only himself and his crew, but also the drivers of the oncoming cars.Yes, the douchbag truck driver was a bit aggressive, but sometimes it requires that to get the point across to unthinking photographers not using common sense.

Cannot condone the trespassing. Why do we continue to exhibit this work?

Funny thing is, none of you commenting on this article had anything nice to say about this it, however you all still showed up to read it!! LOL Quite honestly Jack, I've shat a limited amount of Urbex. I call it "Walking Dead Zones" LOL. I'd be right there next to you if I could. Chernobyl is 3rd on my "Bucketlist!!" Gerd Ludwig published an amazing book on Chernobyl shooting it repeatedly over a 10 year period. It's history and it needs to be recorded, even in its decay! There's something to be said about the excitement of being in a space that's abandoned, knowing you're all alone, and thinking "if these walls could talk." Imagining the people that were there on a daily basis, what their lives might be like now, and do they think about that very space yet today, that's what makes it special for me. It's almost like a ghost story. Then you have to compose a great image to represent that feeling. I think you've conveyed that feeling in your work!! Hat's off to Nikon for sponsoring you!! There's no harm in what you're doing. Stay safe my friend!!