Behind the Scenes of a 50s Inspired Music Video Shoot

Martin Melnick is a Portland-based director and colorist. His studio, Tree House Post, specializes in color, VFX, editing, and motion graphics. Recently he along with his team put together an amazing music video for the band Adventure Galley based on classic 50s and 60s scifi shows such as Men into Space, Destination Moon, and Dr. Strangelove. The video has already received quite a bit of attention from various film and music video festivals and Martin was kind enough to share a behind-the-scenes look at the creation of the video in a brief interview.

We began the interview by talking about Martin's career and how he got into the VFX, color, and cinematography space. "Well I’m a filmmaker, I direct in my spare time. As far as my day job goes I’m in post production. I run this small color company, Tree House Post. We’re a digital intermediate company for TV and film. Right out of film school I started getting some editing and color jobs, I came to realize that out of all the production houses in town very few, one or two maybe, did color work. So I slowly started taking on more and more color jobs until it was almost all I did professionally." Martin also loves working on small budget independent films as both on the production and post side. 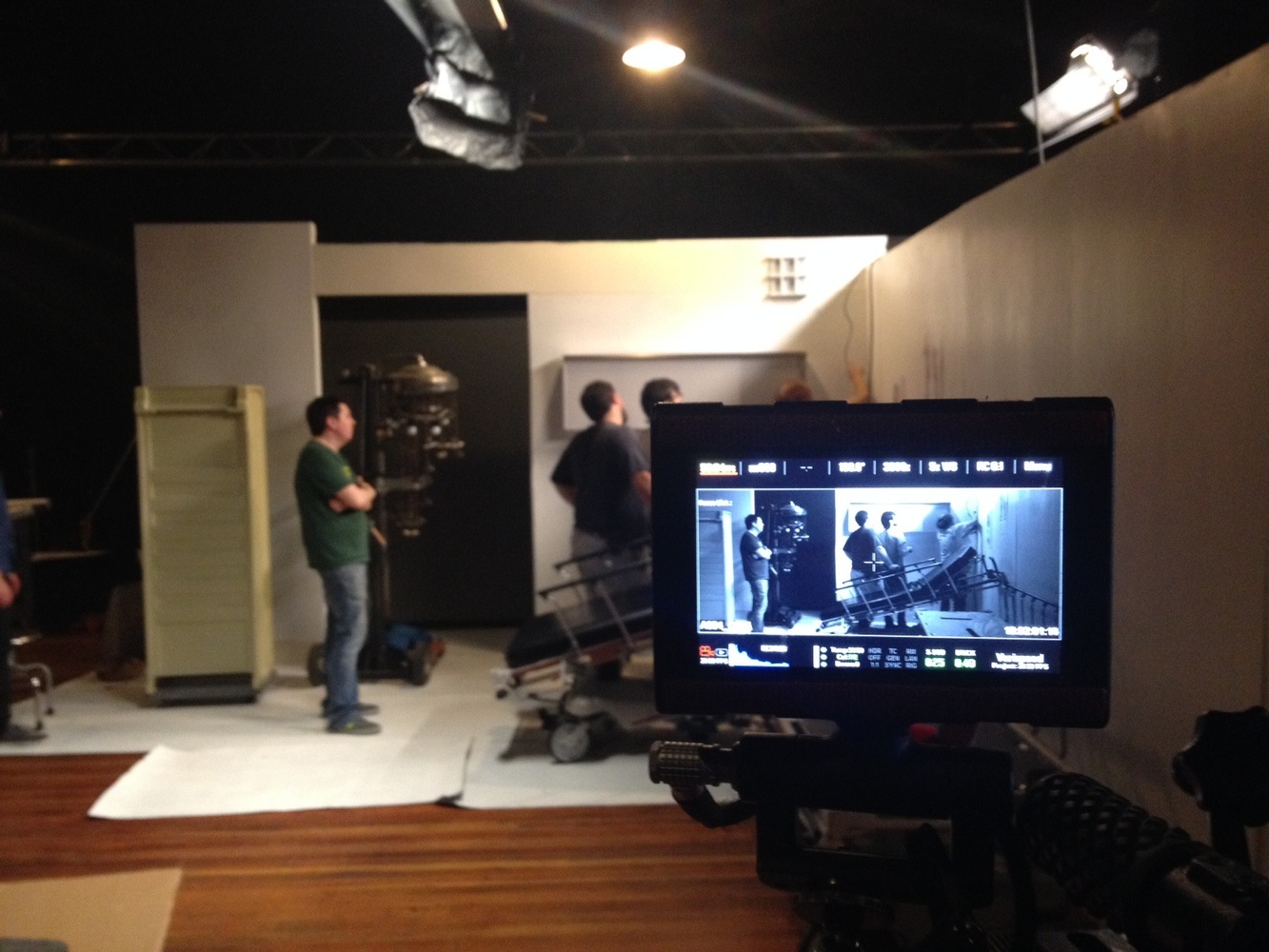 The project started off as a treatment he’d written and sent to a handful of people who he’d worked with in the past. The concept itself was based upon 50s and 60s science fiction TV and films. “All these really old 50s throwbacks, they were basically just B-movies made on studio back lots after A-list films were done shooting. Their production design and set design are really so much fun to try to emulate. So I had this idea in my head about doing a science fiction project that wasn’t all flashy and modern, but a throwback to those films. I wanted to make something I could laugh at and really enjoy doing."

One band Martin had worked with on pervious music videos, Adventure Galley, was very interested. “The guys in the band really loved the idea since they’re all vintage TV and film buffs. So when I heard that I immediately started rewriting it to include the band as characters.” The original treatment was written in a dark, somber mood. One of the most important changes Martin made was to liven it up and give it a more satirical spin. “The band is really fun and love that sort of thing so I wanted to do my best to capture it." 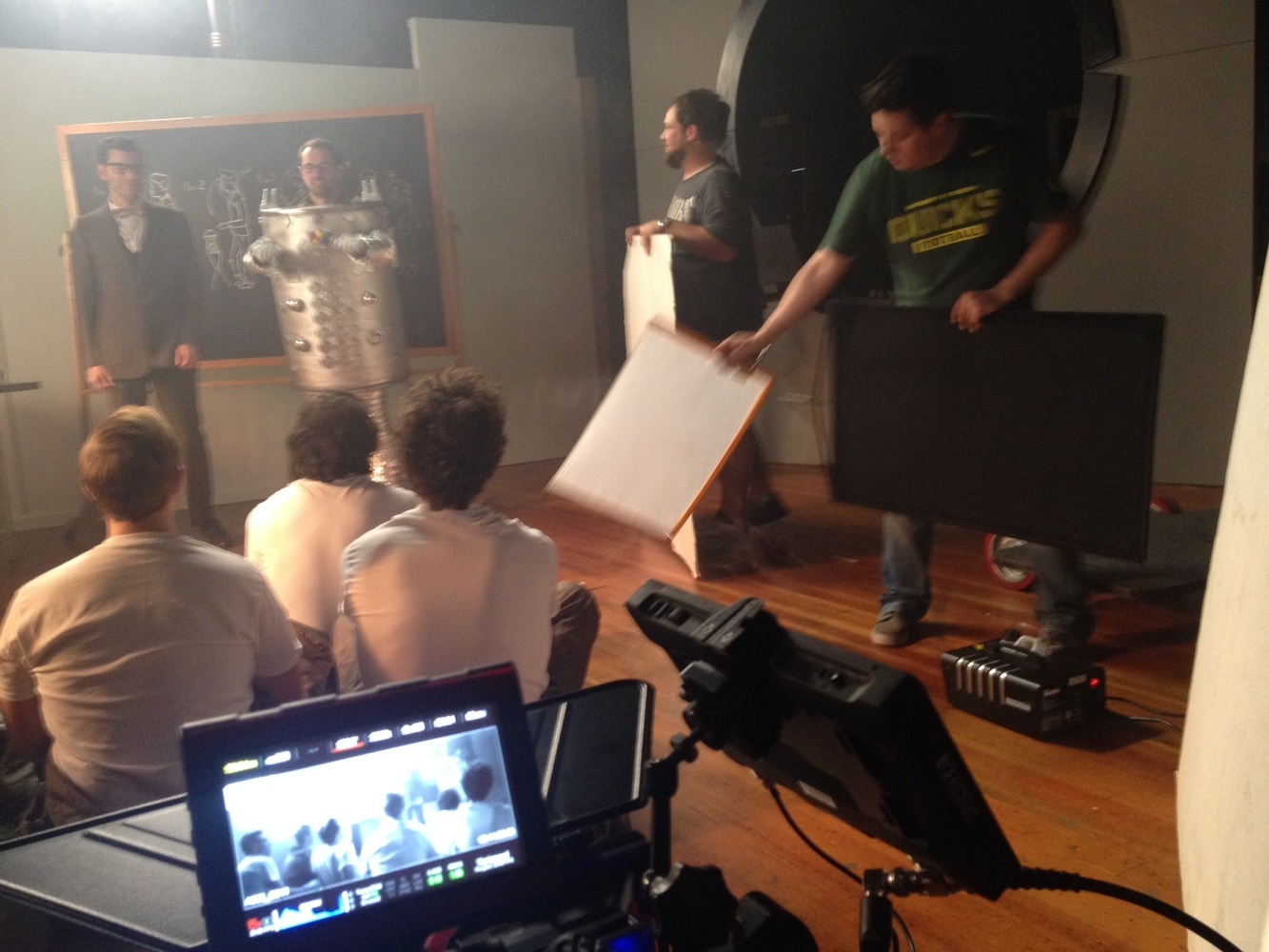 The pre-production process was a laborious one, with weeks spent planning every last detail. Martin is a self-professed perfectionist. "I, we, spent about three months planning this shoot. We were absolutely meticulous in the set design, camera angles, various settings, lighting — since so much can go sideways on set it's important to limit the variables that we can."

It was important to Martin and his team to capture the ethos of the scifi shows they referenced in the video. "Of course in [those] shows everything was done with practical effects, our video was too. We have a really amazing production designer, Travis Becker is our PD but he’s also a gaffer, director, he does a little bit of everything. He built all of the sets from scratch." 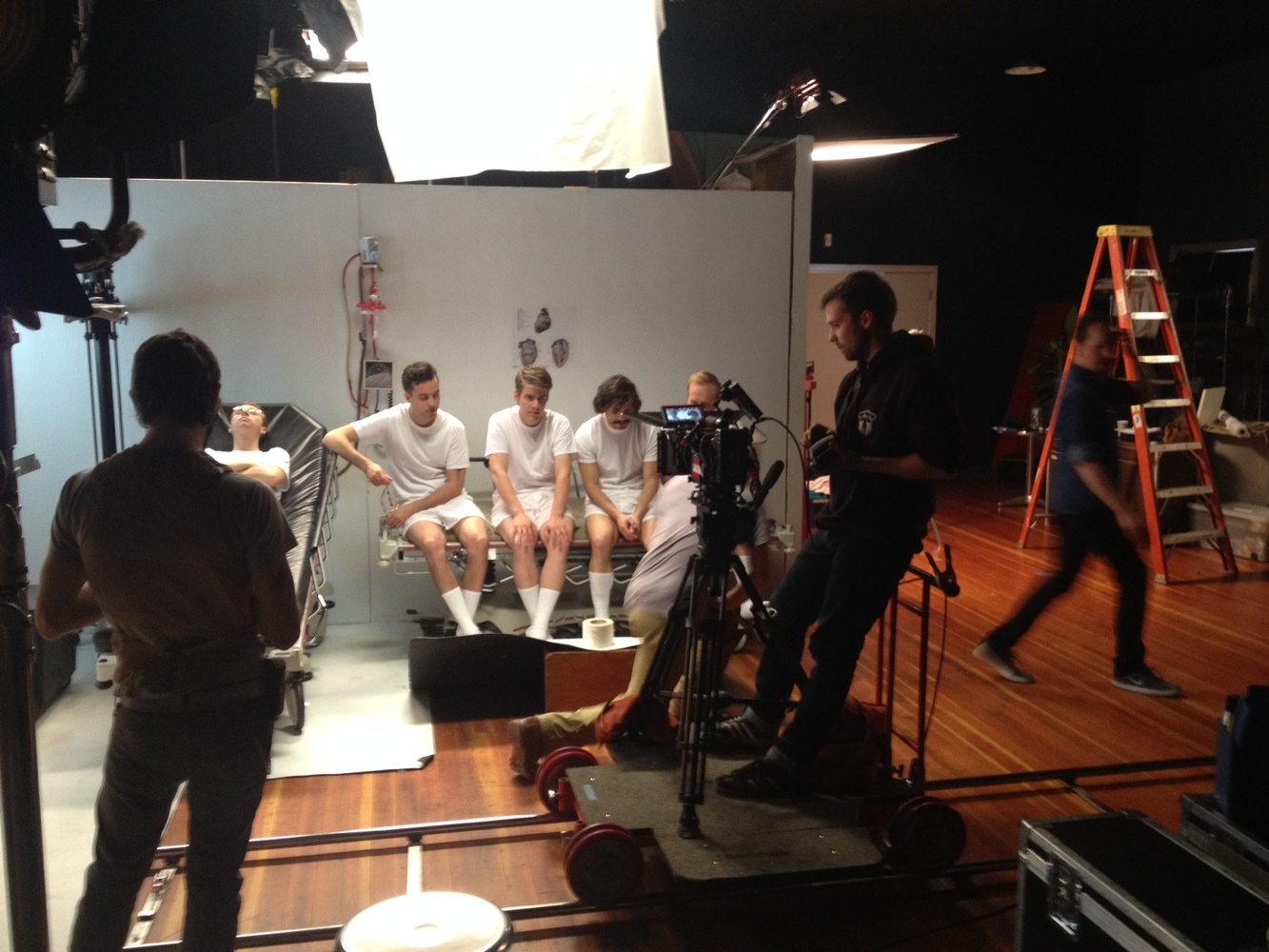 The idea of only using techniques available in the 50s really appealed to Martin and the band. "Despite [the crew] all being post-production people with access to CG, particle animation, we really wanted to do this video entirely practical. There was actually only one green screen shot in this video. It actually didn’t really have to be green-screen, we just didn’t have time to print the backdrop. The window behind the scientists in that lab is the only element we didn’t [physically] build." Every other element of the video from the view of Earth through the window at the end to the rocket were practically accomplished with rear-projection and stop-motion techniques. "I spent my weekends leading up to the shoot covered in craft material making that miniature set".

"The kind of brilliant thing about the set is that it was built so we could [quickly rotate and reset]. We were able to shoot four different sets pretty quickly with that design. The shoot was over the course of three days but we were able to get the majority of the coverage the first day. By far that was the most challenging part, trying to accomplish all these dramatic set changes in one day. It was a little stressful on everybody, there was a point where we were worried we'd have to cut shots. Of course, it all really came together [in the end]. We were able to make it work within our time constraints and budget constraints." 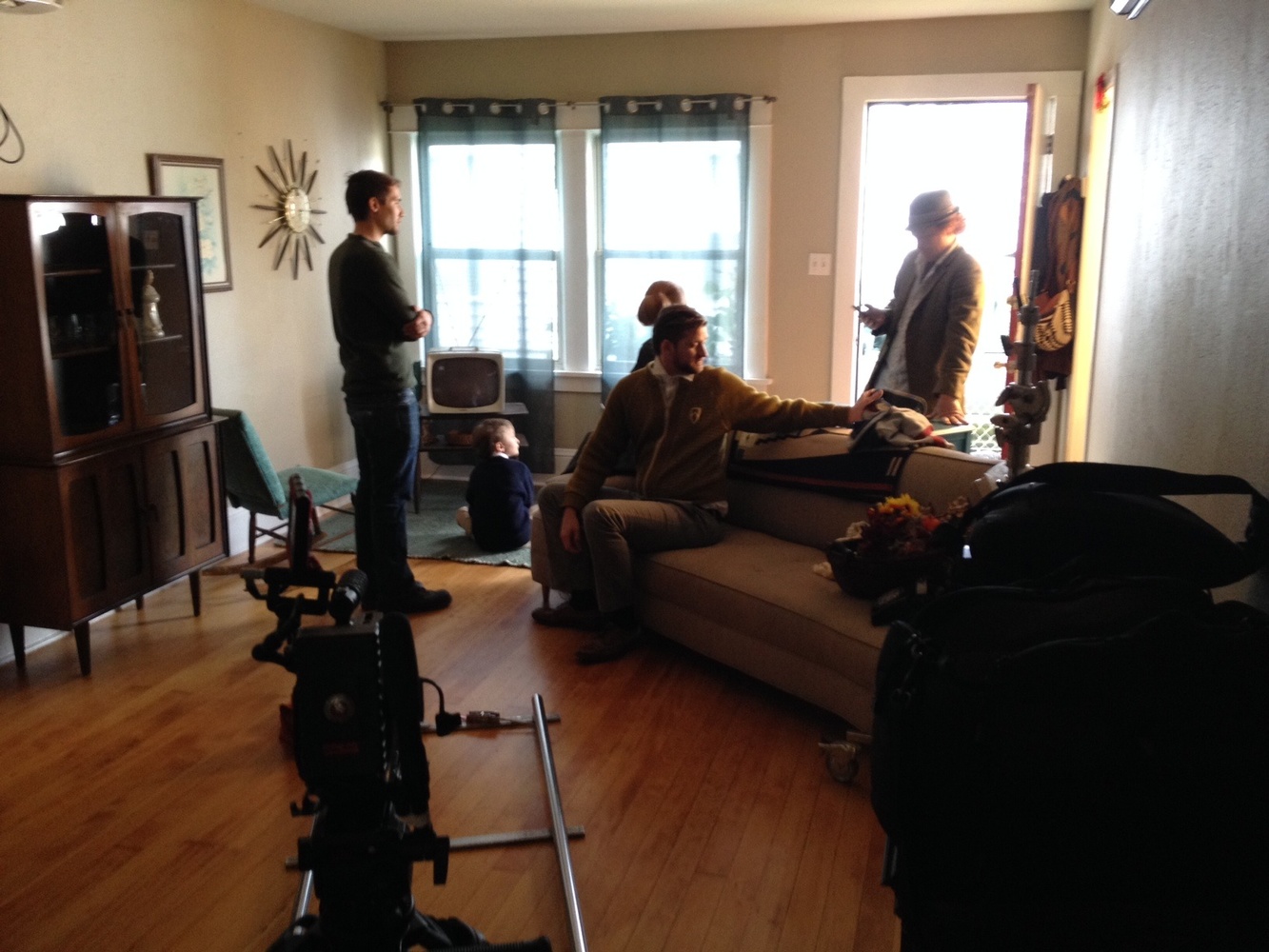 The filming itself was by cinematographer, Gunnar Heidar, who used RED Epic cine cameras with old FD glass. "Honestly if I had the budget for film I would have loved to have shot film. The Epic is great, I work with RED on almost everything I shoot. The only issue is it's so ultra-crisp it's hard to give it an old, film-like look. One of the ways we accomplished that, aside from the studio-lighting setup Gunnar used, was using an FD lens adapter with some old Canon stills lenses. They were super sharp but they're so old and they'd been used so much they had this sort of texture to them that really lent to that classic cinematic feel.

Martin describes the post production process as being fairly easy. "Getting everything in camera is a big deal for me. It makes such a huge difference when I work on other people's footage that it's something I really prioritized in this project." 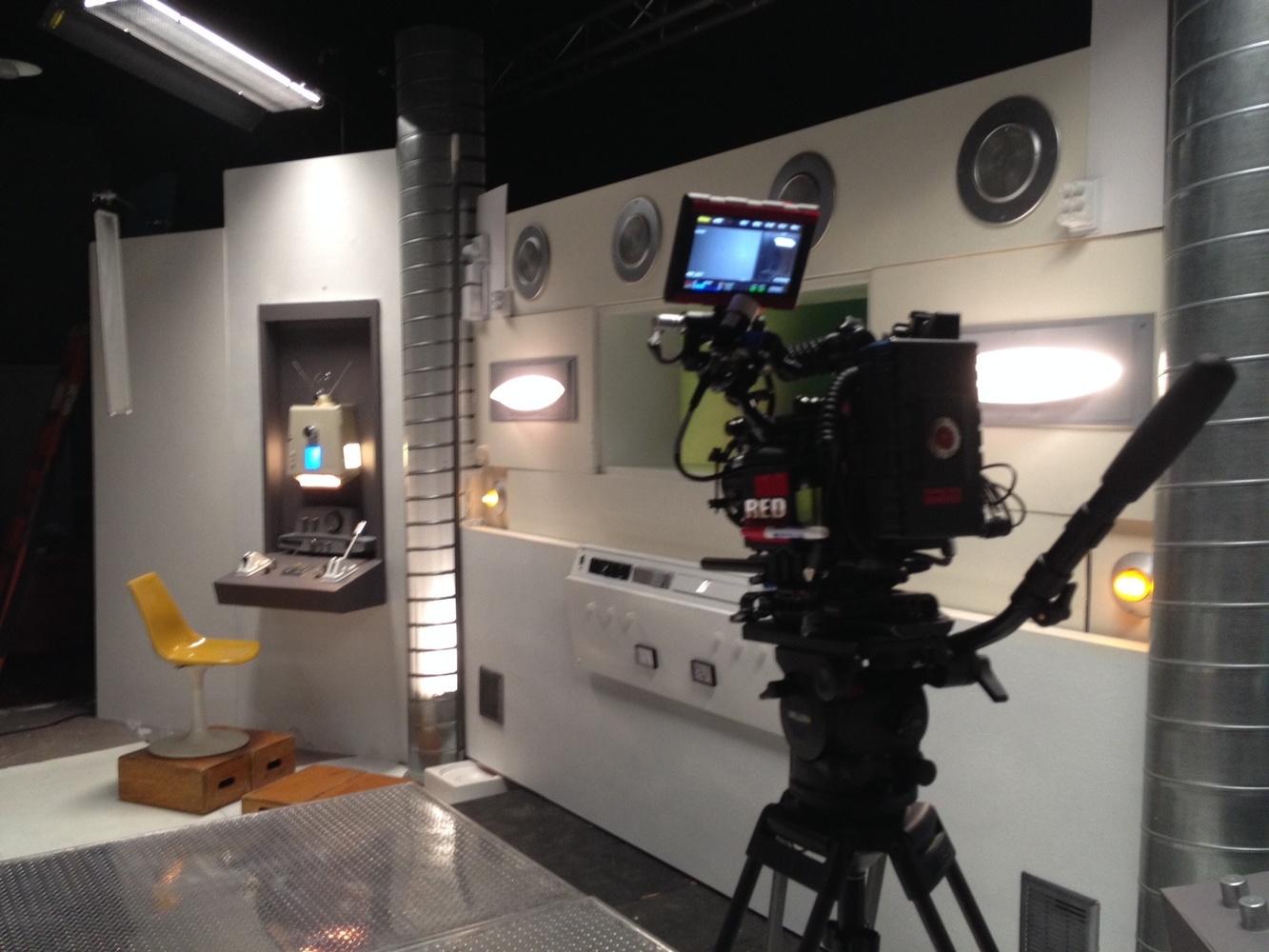 Right now the video is making the indie film festival circuit, it just premiered at the Portland Film Festival has been submitted to quite a few others.

Below is the final product.

Austin Rogers joined Fstoppers in 2014. Austin is a Columbus, OH editorial and lifestyle photographer, menswear aficionado, pseudo-bohemian, and semi-luddite. To keep up with him be sure to check out his profile on Fstoppers, website, drop him a line on Facebook, or throw him a follow on his fledgling Instagram account.

BTS / January 19, 2015
Go Behind The Scenes On "The Great Human Odyssey" - A Documentary On The Origin Of Our Species

Shows what hard work and planning can accomplish!