Michael Belcher is a young New York-based cinematographer who is creating beautiful and compelling work, with a rich and varied visual vocabulary. Come behind the scenes on his latest shoot with this Fstoppers exclusive, and find out what we can all learn from his philosophy, experience and insight.I’m very interested in the work of those whose job it is to combine visual and aural elements together. It’s why I edit and shoot in the style and the way I do. It’s also how I discovered Michael’s work. As Director of Photography for the Pretty Lights “Around the Block” music video (see below), he crafted a rich feast for the visual gourmand, alongside Director Anthony Dickenson.

I was curious as to how Michael and Anthony had collaborated on such an innovative project. The BTS of the Pretty Lights music video was insightful (see below):

Michael mentioned he was teaming up with Anthony for another music video, this time for Jon Hopkins featuring Purity Ring, called “Breathe This Air” (see below for the final video - note, NSFW - some nudity).

I was fortunate to get an interview with Michael and some insight into the production on this shoot. Whether we shoot video or stills, there is a lot we can learn here and hopefully you’ll find the interview and summary insightful and useful.

Fstoppers: Can you tell us a little about the premise and back story for the Jon Hopkins shoot?

Michael: This project was brought to me by the Director, Anthony Dickenson. He has a great ear for music. He sent me the track and a written treatment for the video concept, with visual references. I thought the track was really beautiful, and Anthony's treatment was one of the most compelling I had ever read. Even at that stage, Anthony had very clear ideas about relating the tones of the song to images and human relationships. 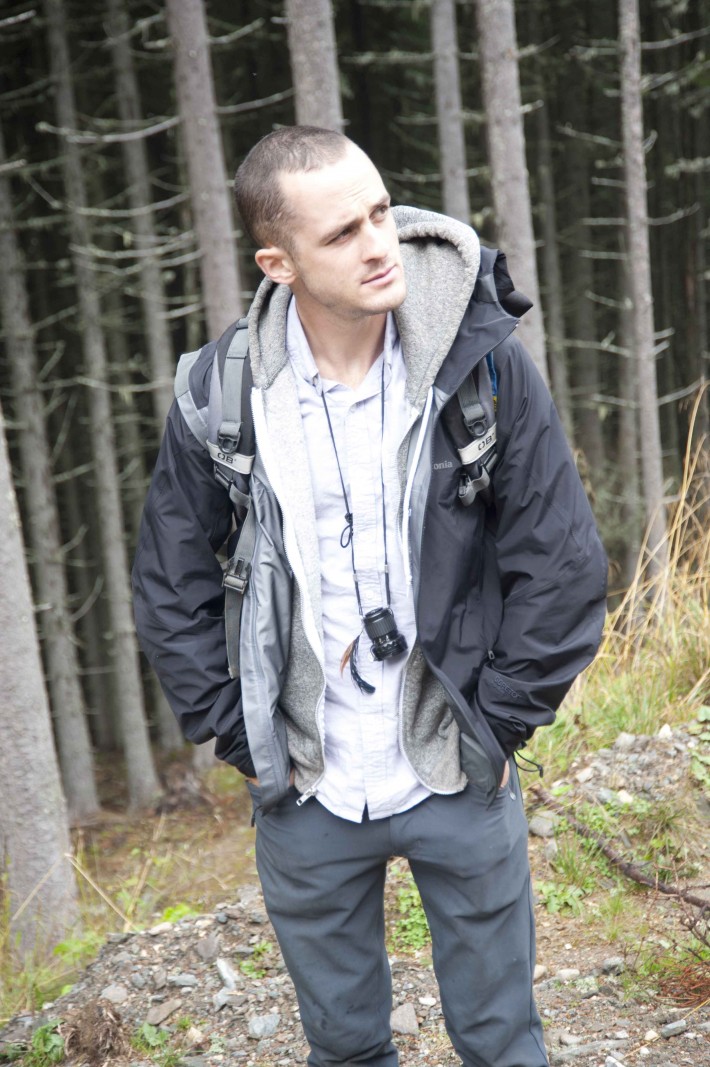 Fstoppers: This shoot looked like it required extensive coordination - can you briefly outline the production process?

Michael: Anthony decided to shoot in Romania, so they brought me from NYC to Bucharest, where I met Anthony and Producer Rik Green, from Pulse Films, who were coming from London. Once in Bucharest, we linked up with local Producer Ileana Anghel at Domino Productions, and she and her team facilitated our production. So much quality control comes from the complete team you bring together on a project, and we were fortunate to have a balance of excellent technical skills and generous personalities. 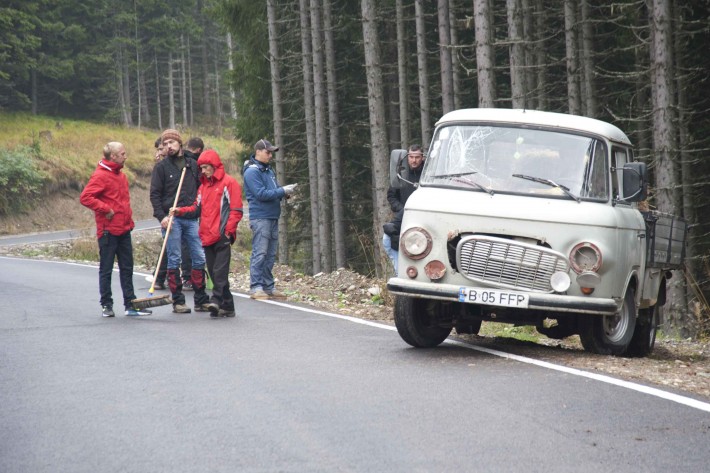 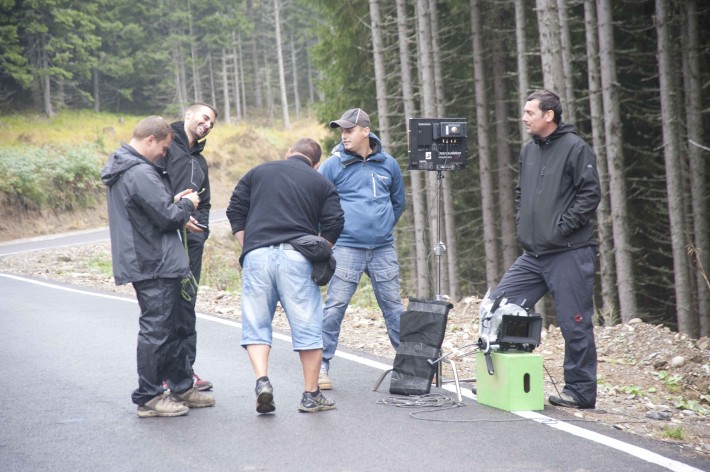 Fstoppers: How did the story you wanted to tell affect the location and gear choices you made?

Michael: I think Anthony wanted to find a location that wasn't easily recognized, that was slightly “different”. The quality of the mountains, woods, roads, and especially the faces we found were fairly familiar in a way but also hard to place exactly.

In terms of gear, you always want to be appropriate for the needs of the content. Anthony's treatment was full of subtle human moments, and the track is very ethereal and kind of mysterious. There are soft, rounded elements mixed with ones that are crisp and angular. We shot Red Epic with Cooke S4 lenses. The image quality from the Red Epic is very deep and flexible, and as long as there are no software glitches, it's extremely fast to work with. With our tight schedule, these qualities became essential. I like the S4's for digital cameras and for beauty content. Their plane of focus is absolutely sharp, but the way the focus falls away from that apex is more dramatic and organic than most lenses. We over-cranked into slow motion but kept the camera handheld. We wanted the audience to feel the romanticism of the slow motion but retain the immediacy and human imperfection of the camera being attached to something breathing and feeling.

We also had the opportunity to work with a small drone helicopter, which was a lot of fun. It couldn't lift the weight of the Epic, so we had to use a DSLR. But in the end, we were pleased with the results. I'm grateful for those aerial perspectives. They really bring out the magic of the landscapes and punctuate certain parts of the song. 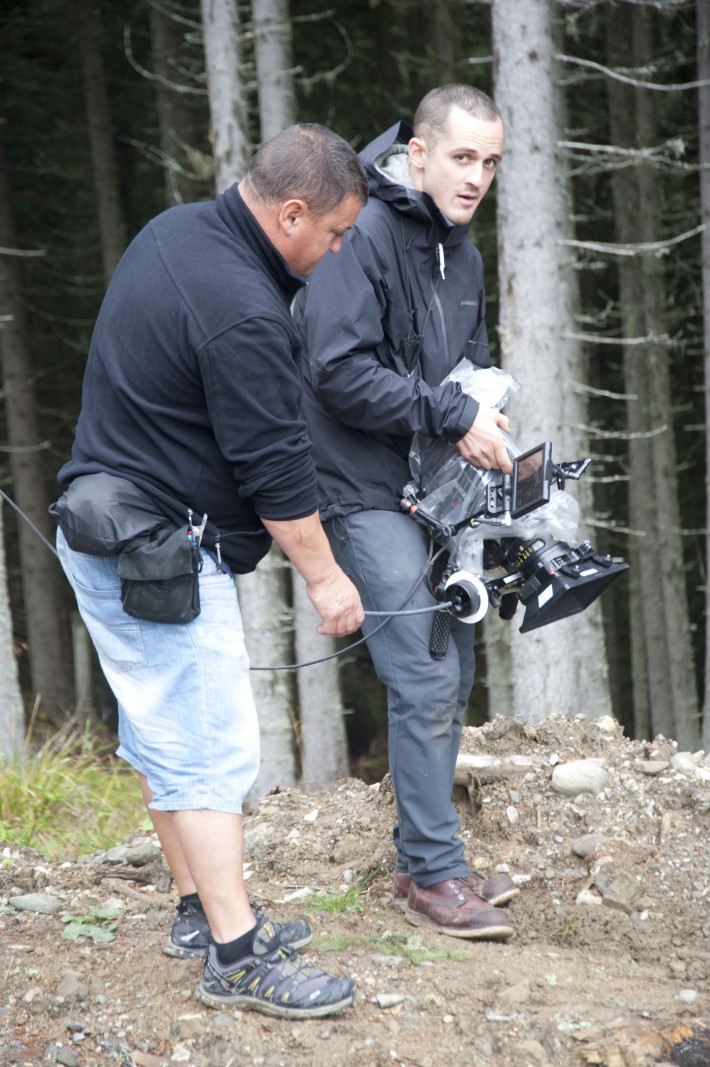 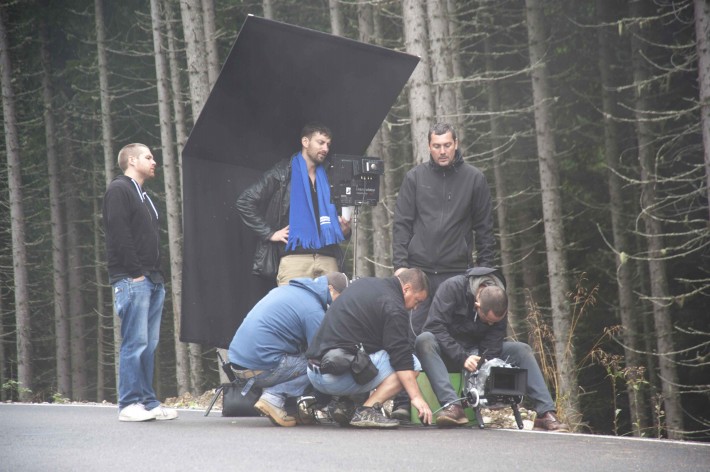 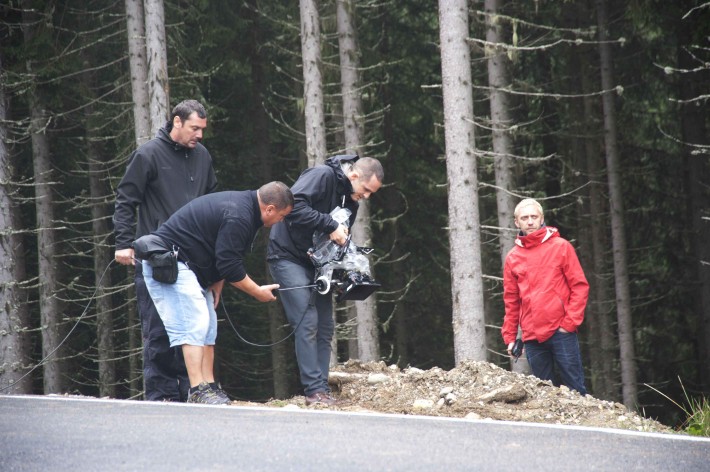 Fstoppers: Can you outline briefly your approach to getting the shots you see or want to capture? Do you do a lot of preproduction, storyboarding, shot lists and so forth before going into the shoot?

Anthony included a lot of visual references with his original treatment, so there was a strong starting point for the visual language. From there we tossed a lot of ideas back and forth and tried to arrive at a kind of limited vocabulary to use for the project. We didn't make a complete set of formal storyboards in this case, but we had a shot list to reference while shooting. With a tight schedule, it's good for me to have at least a list to reference, so that it's harder to forget shots, and of course there's that performance element where you are finding things in the moment of shooting.

Fstoppers: You've worked with Anthony Dickenson previously. How was it working together on this shoot compared to the Pretty Lights shoot?

We had a nice experience working on the Pretty Lights video. I respect Anthony's ideas and work ethic, and I think we have complimentary perspectives and approaches to ideas and life in general. So the longer we know one another the easier and more productive our collaboration gets. 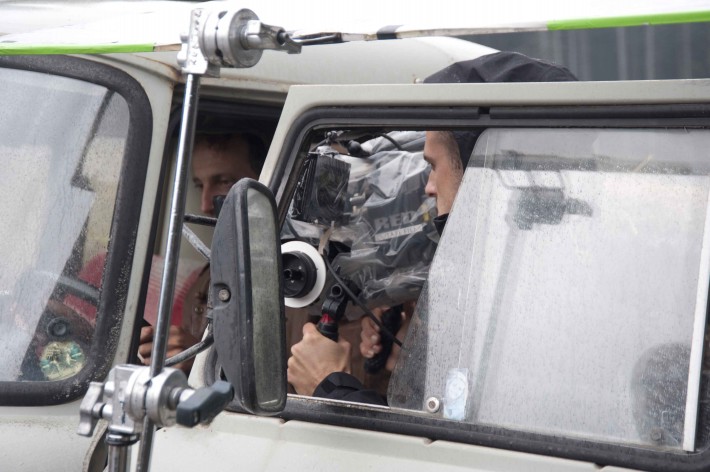 Fstoppers: Can you think of any problems or difficulties that arose where the crew had to change and adapt, and how you guys tackled these?

The shoot was very challenging. The biggest hurdle was probably the work in and around the water. The water was freezing and it was raining during that part of the day, so it was very uncomfortable and laborious to get each shot. To help our actress feel more comfortable being nude in a freezing lake, Anthony stripped down to shorts and spent quite a bit of time swimming in that icy water. It was so brutal, but he was totally committed to getting the moment, and it was pretty wonderful, because there is no complaining to be heard on set when the Director is gutting it out like that!

We also had to be sneaky with the way we approached shooting the deer, because we couldn't shoot the animal inside the same forest where we shot the man with the gun. So we had to handhold our fake deer elements while shooting with our man in the woods, and we had to choose our framing carefully when shooting the deer itself in the other location, which was over an hour away by car. We did our best to match those two worlds and still communicate all the information. We had to be precise, and even then, the editing process was very tricky. It may not seem like it, but there are so many tiny details that have to be put across to the audience for the story to come together logically. In truth, you're always gaining and losing audience members as you shift the edit from more mysterious to more obvious. 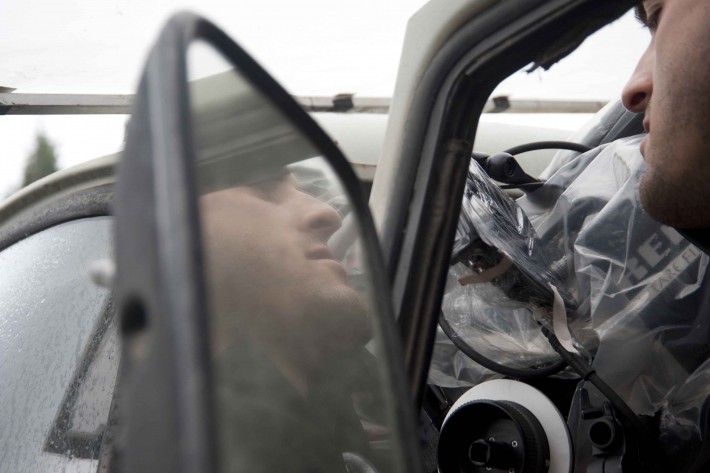 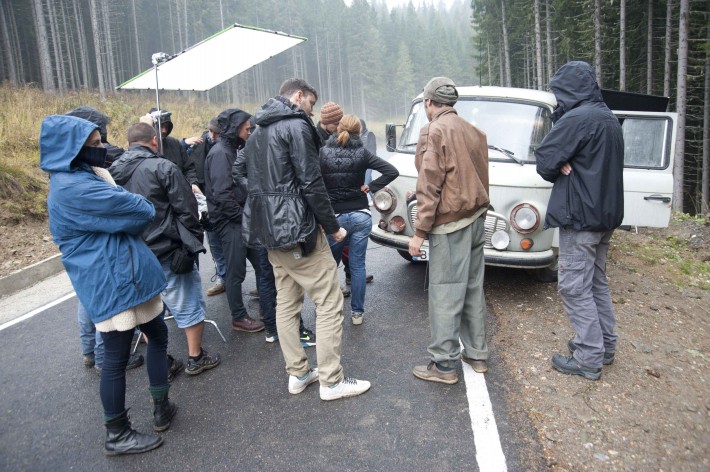 Fstoppers: Is there a DP/Director you really admire or get inspired by?

I've been watching the Australian DP Greig Fraser very closely for the last few years. He's a huge talent. The work he's done on Last Ride, Bright Star, and Killing Them Softly is very daring and inspiring. The images are gorgeous and appropriate, and you never feel his presence too strongly. Take a look at the scene in Killing Them Softly where one of the characters is having an important conversation while on heroin. It's one of my favorite scenes in recent memory because of how well the performance, writing, movement, lighting, and lens choice come together. Everything is in harmony, informing and feeding off of each other. 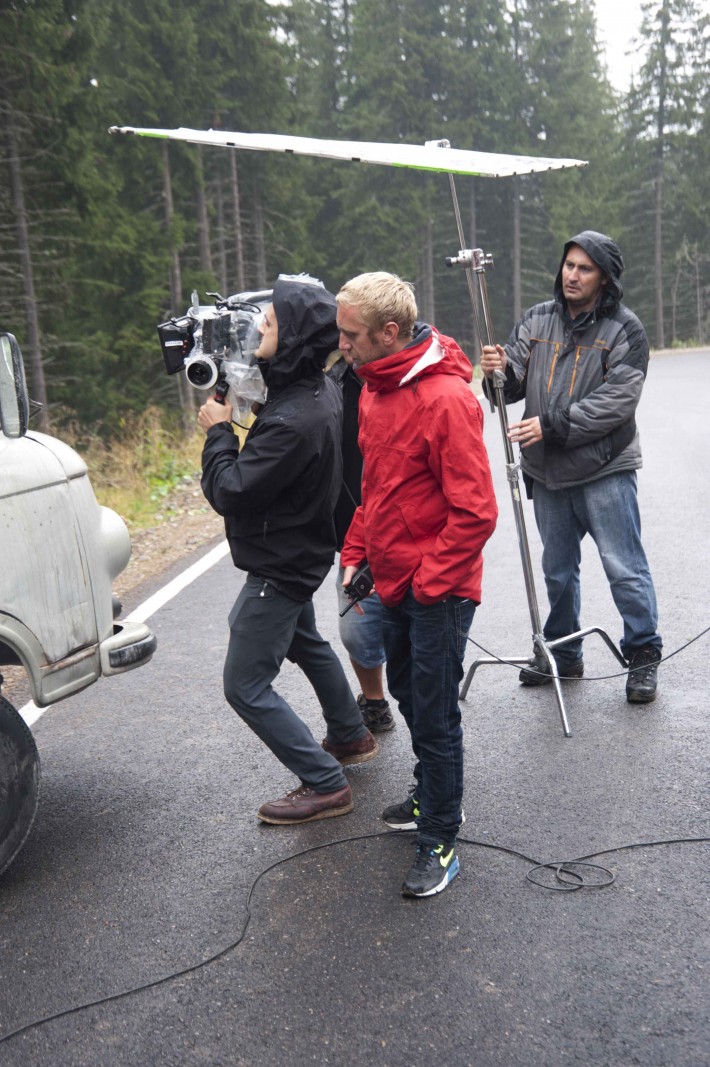 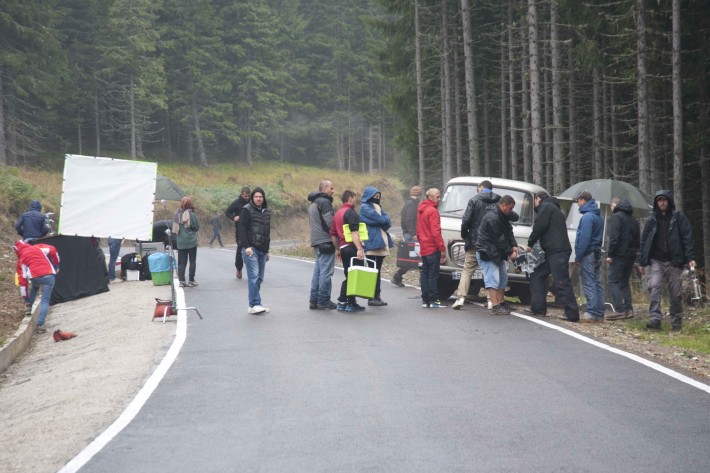 What Can We Learn?

1. Establish a clear visual message. The Director already had a clear idea of how the music would relate to human interaction and used visual references to scope this out. This clarity helps form the backbone of the actual shoot and planning and brainstorming at the outset is critical

2. The team is the factor behind the success. As your productions grow in size and stature, one thing remains a constant and that’s the shoot is only as strong as the crew pulling it together. I’ve been on shoots that have been far more successful when everyone may not have been experts, but where the moral was high and everyone had a positive attitude and came together to get the job done.

3. Gear is important but not as important as what you do with it. We can’t all afford to be using REDs and Cooke glass, but even when they couldn’t use the Epic, they simply strapped a DSLR to the drone to get the shot that conveyed the message. Don’t let the gear get in the way of what you want to say. How you shoot it is far more important than what you have to shoot with.

4. Don’t worry about storyboarding everything, but a shot list is a useful aide memoir. Never forget the organic element in a shoot too; be prepared to capture the moments you didn’t plan for.

5. Getting your hands dirty is important. Diving into an icy cold lake probably wasn’t too healthy, but Anthony’s determination to help out his crew and particularly the female lead surely helped keep the shoot moving along and moral up.

Special thanks to Michael for his time in answering these questions.

To find out more about Michael and Anthony’s work, please check out the links below.

Thanks Saweet, glad you enjoyed :)