I was recently in America doing more photography work and did a total of 11 photoshoots in the one month I was there. It was an incredibly long flight from Singapore, gotta make my time there worth it!

Although I have been to the US before and had the pleasure of shooting there, it's always refreshing to have the opportunity to dive into the ecosystems of New York and Los Angeles. The amount of creativity, star power, and artists is incredible! Oh and the scenery! Oh my goodness the scenery!

While I was in LA, I had the wonderful opportunity to shoot with actor Rob Raco from Riverdale. Having followed Riverdale for the first few seasons, this made me very happy. Fan-girl moment? Maybe, kinda, sorta. I was a professional though, don’t worry!

The shoot was for Creators Magazine and they were very kind to give me total creative control on how I wanted to shoot to go. Riverdale fan-girl moment? Check! Full creative control of a shoot for a magazine? Photographer dream job also check! This was definitely the kind of shoot I want to be able to do all the time.

When it comes to photographing celebrities, there are a few more limitations and it’s important to note that whatever is shot matches the overall brand image that the celebrity (or their publicist) wants to portray. This meant a few emails back and forth with the publicist to make sure everything was clear and that we nail the look on shoot day. I'm happy to say that I think we did! Always a pleasure to work with teams that have shared visions and perspectives of what the final shoot should look like.

The studio I was shooting in is a very affordable place called FD Studios, which I have both tried and loved in LA and NYC; highly recommended! What I liked the most about their studios is that they had multiple sets and rooms with varying looks which gave me so many options on the shots I could possibly do. They may not have the fancy Profoto lights that I'm used to but the space definitely makes up for it. There is only so much that can be done in an empty clinical looking white studio so I really enjoyed being able to shoot in a studio that seemed like an "on location" venue but without me having to drag studio lights and equipment along to it.

One thing I also absolutely love about LA is that the natural light is wonderful to work with. There's definitely a certain je ne sais quoi about it. Those gorgeous colors and contrast, just thinking about it makes me so jealous of the photographers who live there.
I knew that the natural light was going to be playing a part in this shoot but the second I walked in the studio and saw how beautifully the light came through the huge windows, it became a much bigger part.

I had booked the studio for a 4 hour shoot which was a fairly comfortable amount of time for my usual shooting speed. However, no matter how much preparation, things don’t always end up going according to plan and we had unexpected delays and only 3 hours for the shoot. With hair and makeup taking up some time, this meant that I was only left with 2+ hours for the shoot. The sun was setting and time was running out. I knew I had to quickly think on my feet and use lighting that I knew was easy to change from set to set.

Nothing like a little challenge. When we were at our last two outfits, the sun was mostly down and there wasn't as much available sunlight left. I decided to move on to just shooting Rob against the plain white background with the studio lights. These images also ended up giving the whole spread additional variety so I was really happy with the results.

In the end, this turned out to be one of my most efficient shoot. The team I got to work with were all amazing and I also had a fantastic assistant on set. Plus Rob also had an incredibly photogenic face and settled into poses quickly and naturally in front of the camera so that definitely helped.

The lighting setup for this was made to be a complementary fill to the natural sunlight. As I did not want the fill to stand out too much, it meant using super soft light, which also meant using a big light source. The biggest modifier they had available was the 7' parabolic umbrella with a diffuser. During the shoot, it was used straight on, feathered, and bounced off V flats, depending on the situation. As the natural light got darker, that strobe started to be a strong light source. Just so it's clearer, you can have a look at these lighting diagram examples that I made with 3d.set.a.light below. (My absolute favorite lighting program)

The whole shoot itself was tethered through a TetherPro cable to Capture One. This allowed the makeup artist and wardrobe stylist to view the images while on set so they could adjust the hair and items of clothing accordingly, allowing them to be even better at their job while reducing the amount of post-shoot retouching work for me. With Capture One, I was also able to color grade and add in edits such that the images that appeared on screen while tethering are already closer to what I envision for the finished product.

Once I was done with the photoshoot, I filtered through the images in Capture One and then retouched them in Photoshop. The main two plugins I use in Photoshop are the Retouching Toolkit (Code: SHAVONNE15 if you're interested in a little discount!) and the Infinite Color Panel. The Retouching Toolkit is a hugely customizable Photoshop extension that helps speed up the retouching workflow. It helps me cut down on steps that I'll need to take which might not seem like much on one image but when you're retouching a set, this really adds up. Quentin wrote an article on it here. Infinite Color Panel, on the other hand, is strictly for color grading. Color grading is this huge complicated topic that is so subjective it becomes confusing rather quickly. For me, this panel really helps me see the different directions my image can take with different color grades. Both are fantastic plugins and help fast track my editing process.

Fashion Stylist: Adam Ballheim for the Only Agency

BTS / February 27, 2020
How I Shot Chriselle Lim for the Cover of Female Malaysia

Excellent !!! Thanks for the BTS !

This is a really good breakdown Shavonne! Thanks for the write up!

Good to know you find it useful Cody!

"the fancy Profoto lights that I'm used to" The majority of your articles come off more like Profoto ads but this one because you were stuck using buff strobes, you seem to go as far as you could go to not mention them at all. Not in your pics, not in the schematics and not mentioned even in the list of stuff used. Not sure if you're sponsored or not but it comes off snobbery when looking at your other articles where profoto is worshipped. I don't think anyone here will look down on you if you don't use the most expensive stuff available. So was it a b800 or 1600? 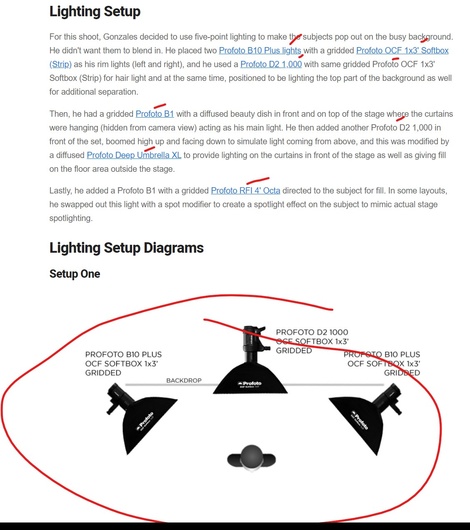 Honestly, it's just because they are lights in a studio I'm not used to so I just don't remember what brands of lights they are. But I think it clearly shows one can still get results from other brands.

Here in Singapore, I own Profoto lights so obviously I would make use of them for my shoots. As for Jan's shoot you're referencing, I tell all the photographers I feature to give as much details they can remember from the shoot. If he remembers what lights he uses, I don't see what's the problem. They are just facts.

Thanks - great article. Really good to see the BTS's too.

What stands out is the wonderful use of colour in these shots. The colours of the skin tones, clothing, props/backgrounds and lighting creating fantastic moods full of contrasts and complements. I particularly like the second shot, though they are all excellent.

Thank you for your kind words Iwan! I had a great team to work with plus the studio and the natural light really made it all come together nicely so I'm thankful for that!

Great work Shavonne and really informative post. Do you find AF with the Fuji consistently accurate and any issues with backlight from the windows? Very interested in this camera for portrait work!

Hey Chris! I usually use the AF Face Detection and have found it pretty accurate. The backlight for this shoot wasn't too serious though.

Thanks, good to hear!

Thanks Jim! Glad you liked it! 😊

“Celebrity Rob Raco of Netflix’s Riverdale”
I’m sorry, but if you have to introduce someone as a celebrity, they are not, in fact, a celebrity.

It was an incredibly long flight from Singapore, gotta make my time there worth it! https://floorrefinishingatlanta.com/