How I Shot a Magazine Cover with Liam Gallagher

In September I was lucky enough to have the pleasure of a couple of hours of Liam Gallagher’s time to shoot a magazine cover and 12-page spread. Here’s a detailed breakdown of my thought process, creative ideas and how the shoot was executed on the day.

For this shoot I used the following equipment:

“Where do I start?” That was my initial thought after getting the shoot confirmed back in July. How do you go about photographing a man who has done hundreds, if not thousands of photoshoots in his career spanning over 25 years? Oasis was formed the year I was born – he’d seen and done it all by the time I ever picked up a camera.

The campaign leading up to the release of his debut solo album, As You Were, was already in full swing throughout the summer. I kept a close eye on other cover spreads that had come out featuring Liam, and noticed he had most recently done a big feature with British GQ. These particular images were shot within a luxury penthouse suite, largely bright and neutral in colour. Instantly, I knew I had to do something different – opposite, even.

I have a soft spot for gritty, grimy locations… particularly dank and dark warehouses. Unfortunately for me, it’s rare to have either the budget or the pull of such a name in order to wrangle a legitimate warehouse space. But if there was ever a time to try my luck, it was now.

I managed to locate a place through the suggestion of the magazine editor – a warehouse in East London called Islington Metal Works. It spans several floors and includes everything from a virtually-abandoned attic, to a gig space used on a weekly basis. In other words, it had the variety that a magazine cover shoot needs from its location; it’s always best to have options since so many factors are being brought together and it can really differ on the day to what you had envisioned. Composition, lighting, styling, and the opinions of varying members of the team mean it’s essential to have a variety of choices for the backdrops of your shots. 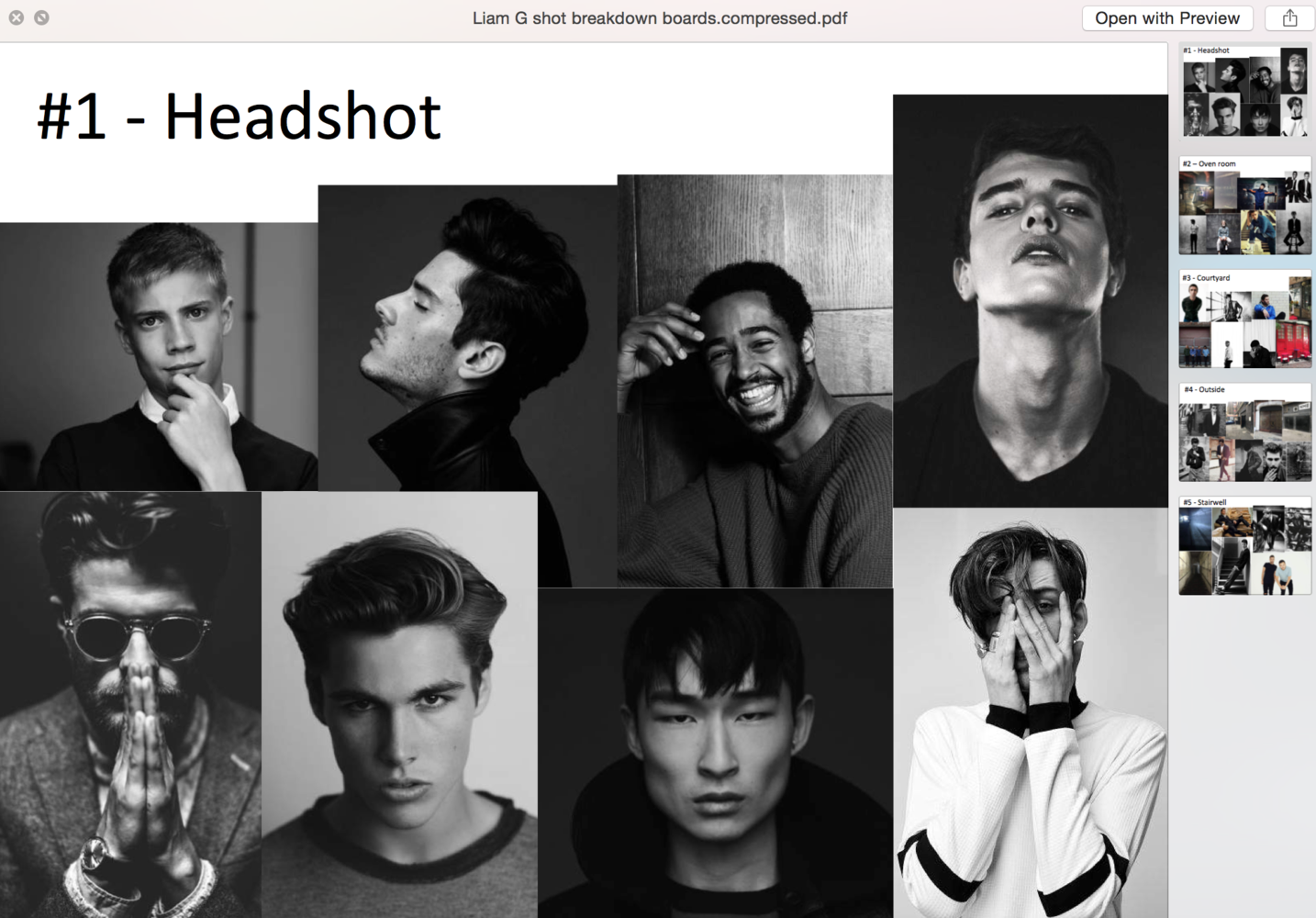 As with any shoot that involves a celebrity client, a mood board is required to demonstrate both the shoot concept and the styling direction. Musicians and actors have a creative team around them whose job it is to establish a particular image – and brand – for the talent. Although magazine editorial teams are often left in full creative control, it’s imperative for the musician’s team to see that the concept and clothing choices aren’t going to damage the public image of their client by going really off-brand or doing anything that could be perceived as being too risqué, fleshy, or seedy.

By this stage we had the location confirmed, so I included visual references of where we’d be shooting when curating my individual shot breakdown. I planned for at least five set-ups, adding in images to the board that demonstrated whereabouts within the venue we’d be shooting, as well as giving an indication of the mood, color, and the sorts of "poses" or stances I was aiming for. I then consulted with my stylist to make sure my concept matched her styling board, before sending it over to Liam’s team for approval. Privately, I began to make more detailed notes on individual shot breakdowns that I had in mind.

Liam is, by all counts, someone who can get away with just standing there and still looking effortlessly full of character. Really, I didn’t want or feel the need to deviate away from his usual image, but rather I wanted to build on it. He’s not someone that requires much molding. 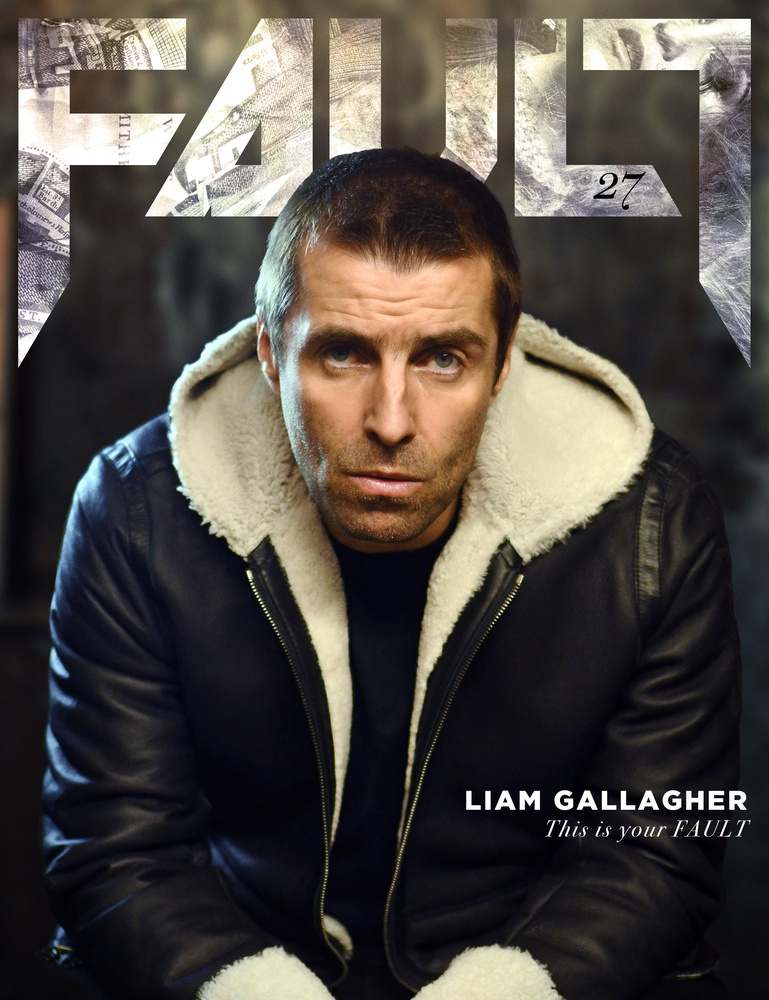 Upon visiting the venue in advance, it became apparent there was zero natural light available. I had originally envisioned some moody shots with window light, even including some references on the initial concept board we sent over to his team before I worked on the shot breakdowns.

I was still open to using a multitude of different lighting set-ups but ultimately settled on using my Nikon SB-700 flashgun. Our shoot fell on what is known as a press day - not unusual – and meant Liam was hopping to and from other press commitments all day. We had a slot of between one and a half and two hours to complete this – ample time to fit a shoot in, sure, but also realistically a time period that can pass rapidly. I didn’t feel confident a lighting set-up that involved light stands would be practical given the time restriction. The versatility that a flashgun allows means I could navigate around the venue, and around Liam, without having to stop repeatedly to adjust and move lights. With the location spanning across several floors, it could easily have become messy and slow-paced.

I used the flashgun for most of the set-ups, including this article’s featured photo. Wearing a huge Dior cape, we decided a bit of movement would work better. Liam really liked this outfit (“really fucking cool mate”) and was really into the movement. Walking towards me, I had him keep his arms out, lifting and lowering his hands. The practicality of the flashgun meant I could keep moving and could capture the motion. I used to be terrified of flash – I didn’t understand it. But honestly, this shoot and this particular type of shot wouldn’t have been possible without being shot this way. I recommend taking the plunge and doing some test shoots to practice shooting flash if you’re unfamiliar.

For the cover shot, I scrapped the flashgun in favor of seeking an image with a bit more of an atmosphere. As part of the previous set-up, I’d used a continuous strip light that was part of the venue and decided it would form quite a nice light if used to illuminate Liam’s face. I turned him 180 degrees and had him this time sit facing the light. The light filled with face and jacket quite softly in comparison to the harsh nature of a flashgun. After a few practice shots, I also added one continuous light, placed diagonally on the side and back of him, to illuminate his face from the side. It’s only subtle in the grand scheme of things but just helps to separate him from the background, and make it pop a little more. That light was part of a cheap set-up I bought from eBay. Overall, the venue’s strip light (by no means professional photography lighting equipment) created a nice yellow hue which I accentuated slightly in post-production.

The venue’s lighting also came in handy for a later set-up, too. Shooting in the part of the venue that hosts gigs, I used the spotlights they normally reserve for gig lighting to light Liam for this one. That included a white light with a discreet cool tint to it, as well as an amber light which ended up lining one side of his face to make the portrait more interesting. Again, these were inexpensive spotlights used by a small-capacity gig venue that essentially served as make-do continuous lights and color gels. It’s not something I could plan for, but something I observed when talking to Liam as we were going over clothing selections earlier at the shoot. 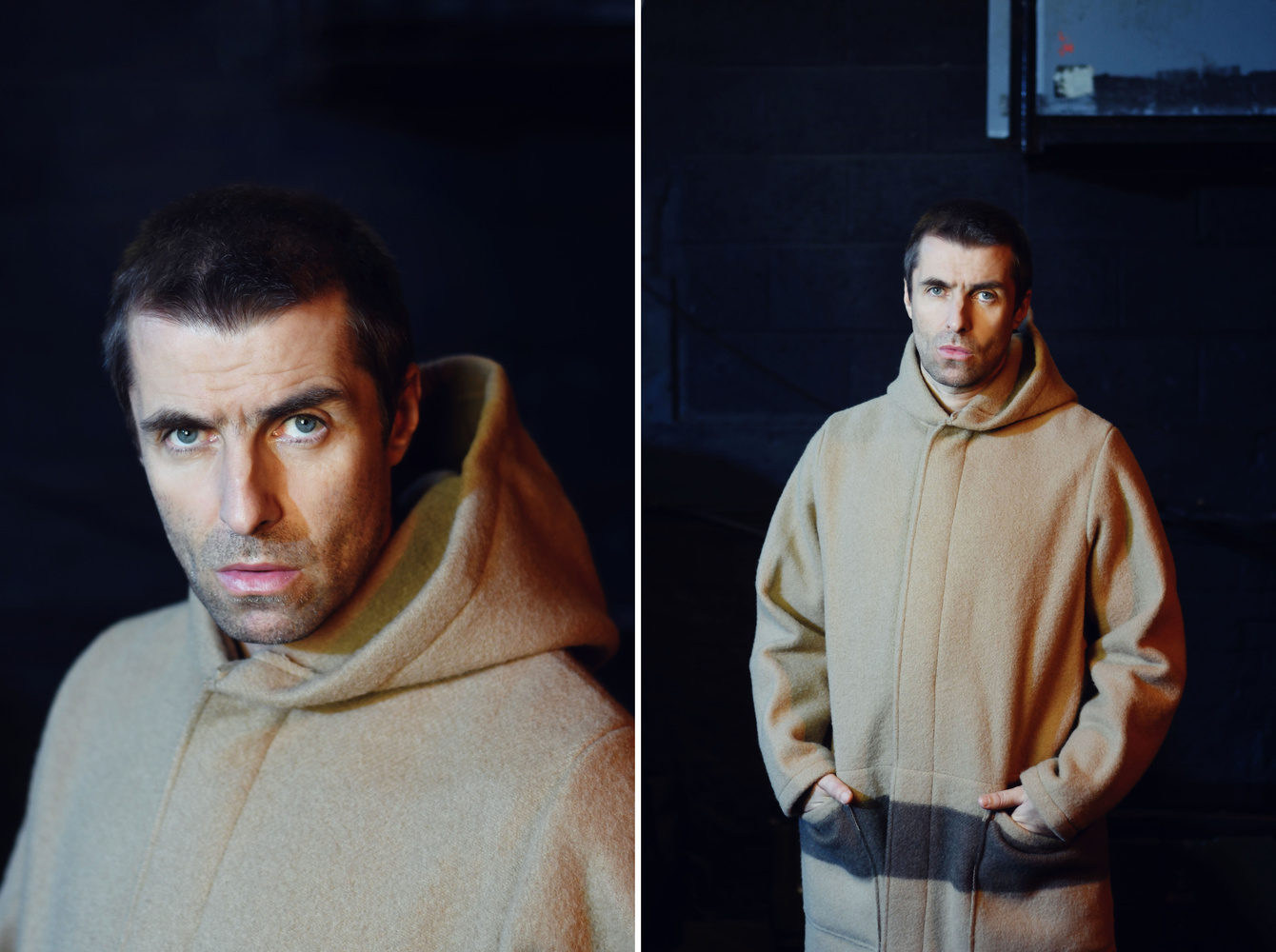 On the day, Liam was really involved in the shoot. Of course, any rock and roll frontman has a reputation that proceeds him. Days earlier, I’d watched a tongue-in-cheek viral video of him talking about the Oasis heyday, and how he used to have four people making his cups of tea. It was funny and really showed off his sense of humor, but I’d be lying if I said there wasn’t a part of me that wondered if he expected similar (something) at the shoot!

He was uber-professional. When he arrived on set, he made sure he’d spoken to everyone on set and shook their hand. I asked him for his music request and we played The Rolling Stones. As we began taking photos, he said, “I’m not much of a smiler, but anything else goes.” That worked for me!

We got through eight outfits in total – possibly a record considering we shot it all in under 90 minutes. He got involved in the creative, even suggesting some of the shot ideas. I proceeded to travel straight home and back the images up at least seven times (joking, not joking).

I ended up with over 70 final, PR-approved selects – again, possibly the most I’ve ever had from one shoot! It’s almost a shame there’s only eight or nine making it into the final spread.

On reflection: there were certain decisions that had to be made spontaneously on the day. For example, we had planned to shoot some of the looks outside, and also in the venue’s courtyard – a naturally lit area that is filled with cobbles and large railway doors. Ultimately, in reviewing the first few shots on the back of the camera whilst on set, the team and I decided any pictures taken with natural light would only deviate from the story – it was shaping up to be quite dark and contrasty. We scrapped those locations and incorporated the shots and set-ups we’d scheduled there into other, darker parts of the warehouse instead.

In order to edit the images, I used Photoshop to enhance the contrast and colors. Both of the below tend to produce results I like.

The shoot runs as the front cover and 12-page spread inside FAULT Magazine Issue 27, releasing on November 27th. If you’d like to see more of the issue and read extracts from Liam’s interview, you can find all that good stuff here.

I hope you find this article helpful, somewhat. Please feel free to leave any questions in the comments! 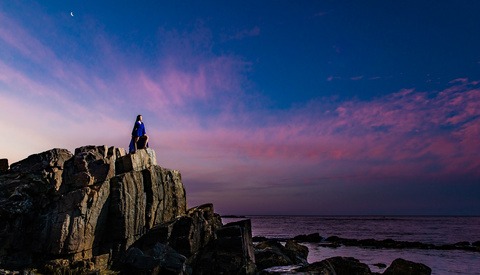 BTS / August 9, 2018
When You Can't Use a Light Stand: The Drone-Mounted Flash Fashion Shoot 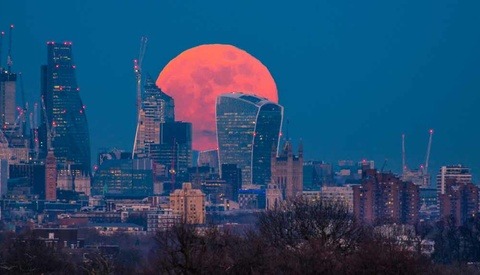 Thanks Mike, hope it was useful!

Just a fantastic GET -- full stop.
Just a little green with envy.

Well done pal. Liam is a legend around our way ;)

I want to know what jacket he's wearing in that first image!

The cape with the faces on is Dior, and the jacket on the cover shot is by a brand called Vince.