As a photographer, my skill set is constantly put to the test. In most cases, I’m handed an idea on a slab of wood and the mission is to hand that idea translated to a tangible artifact back to my client on a silver platter. It’s never an easy process, but it’s a part of my job.

I’ve shot in water over half a dozen times and I love it. I love the challenge and I love doing something different. The idea brought forth by makeup artist Casey Ritchie was to shoot a model in black water, with only the face to be seen and the makeup as the stand out. I was immediately presented with two mighty challenges; shooting the photograph in water in the middle of winter and shooting in water from directly overhead without the use of a ladder. The first step was to conjure a way to shoot this idea in a studio setting. The only way I felt it could be accomplished was with a child’s plastic pool, rather than using an indoor pool or bathtub. Using a bathtub would present a lot of problems, most importantly it would be tough to rig lights safetly. Draping a black cloth over the plastic pool would be the best way to darken the water to the blackness we needed. The next hurdle was safety, lighting and camera placement. 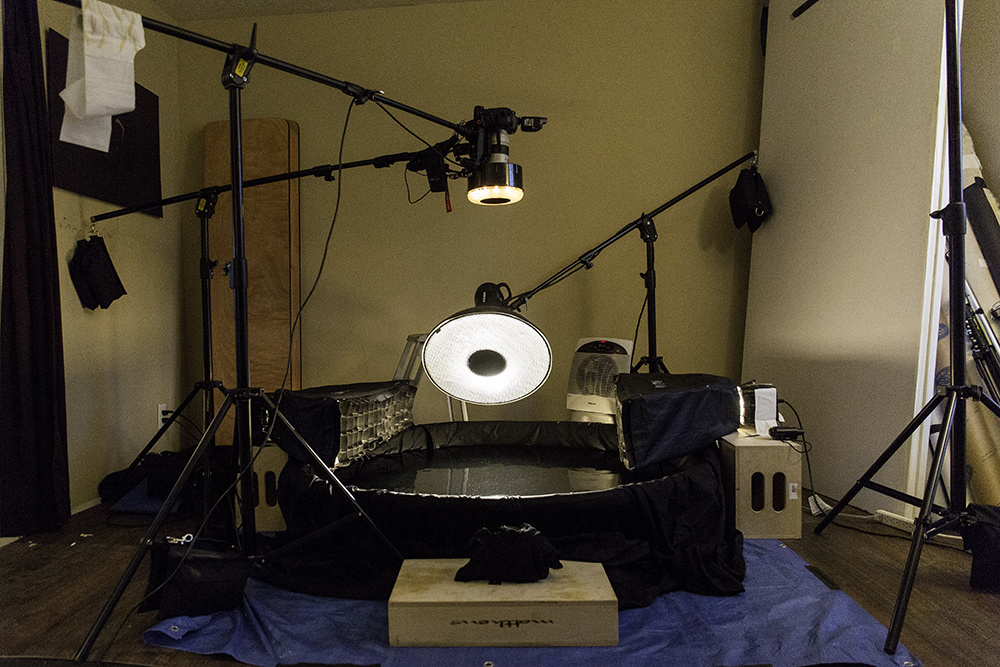 Fortunately, I have a lot of experience with booming my camera for a 90 degree overhead angle without the use of a ladder or crane. So, we secured a Canon 5D Mark III with a Manfrotto 026 Swivel Umbrella Adapter and wrapped a Vulture Equipment Works A4 camera strap around the head of the stand in case the adapter failed. I fired the shutter using the CamRanger; a wireless DSLR remote control and tethering system. The next step involved lighting the pool. Unfortunately, we couldn’t just jump in the water for pre-lighting so, we had to estimate and use the palm of our hands to predict how the light would fall on the model’s face. 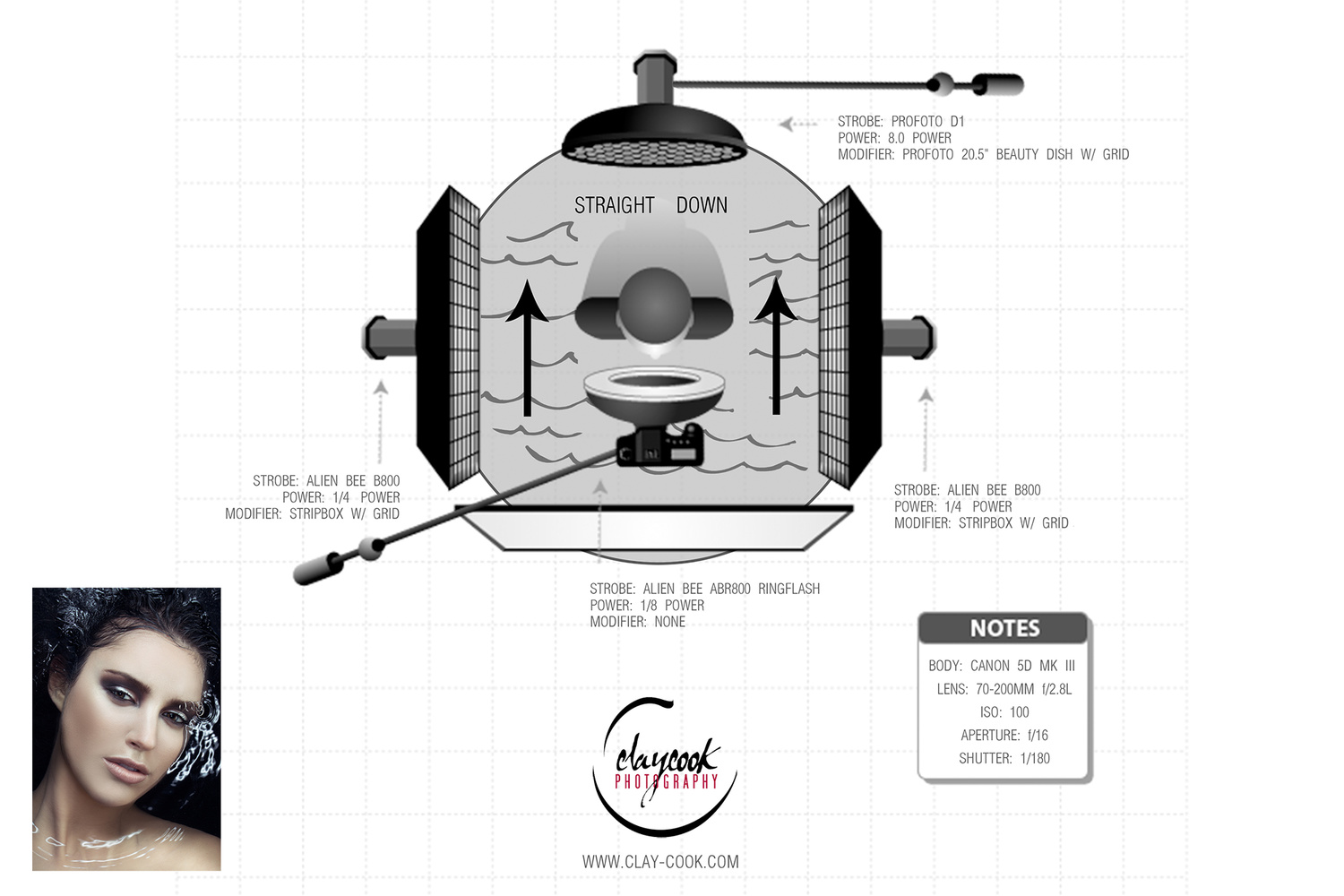 This broke the mold of my “go-to” beauty setup. Initially, I had a good idea of how I wanted to light the pool, but once everything was actually in place, I realized it was completely impossible. The key would provide the main source of light, but also be very dramatic and directional. Using a 20.5” Profoto Softlight Beauty Dish and a 25° grid, I rigged the dish over the models head and feathered the light, so it wasn’t nearly as direct. 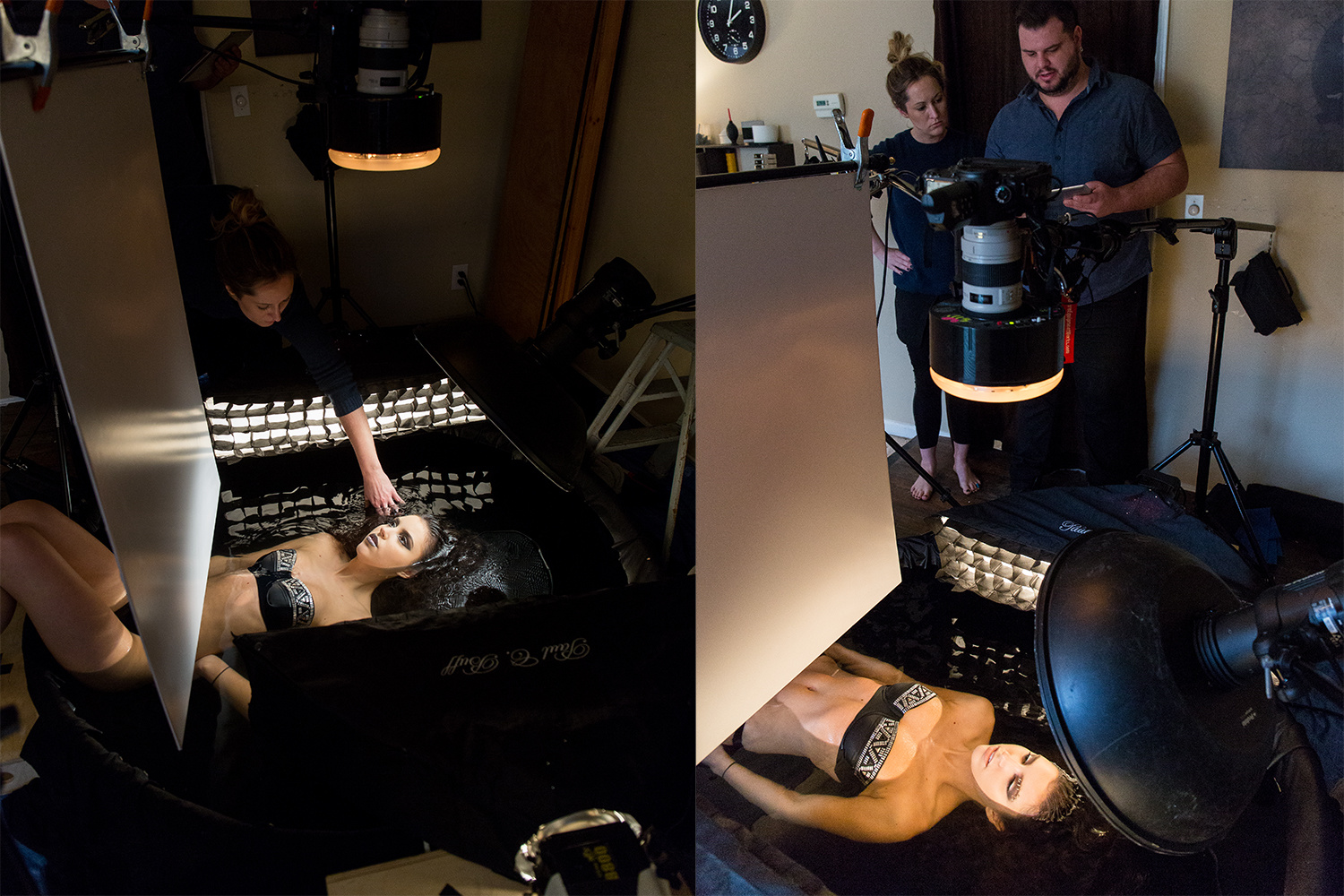 At first glance, it looks as if the side lights are acting as a kick of some sort. But, in actuality they are simply adding fill to the shot and provided some incredible catch lights. I set them up purely as an experimentation. They didn’t provide much interest or contrast, but certainly added a different dynamic to the face. 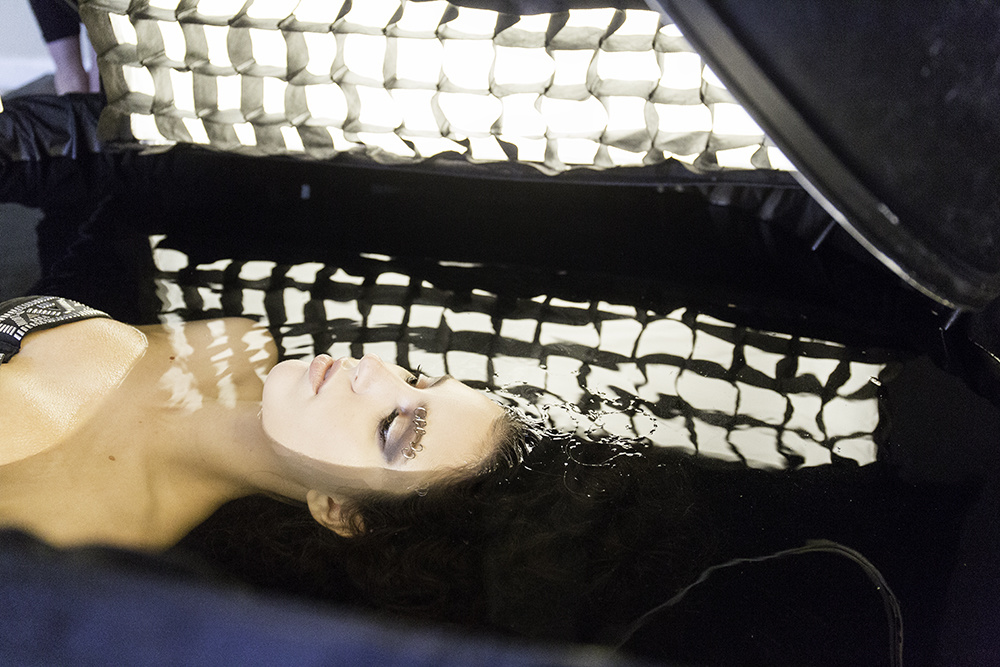 I normally dislike the look of direct light, unless it’s a hard speedlight or modified light source. But, in this case, I felt the ringflash was fitting as it added a strong fill to the face that white foamcore or light from below her face couldn’t provide. I needed a direct fill and because of odd reflections the ringflash was the best option. It added the right amount contrast in all the right places. 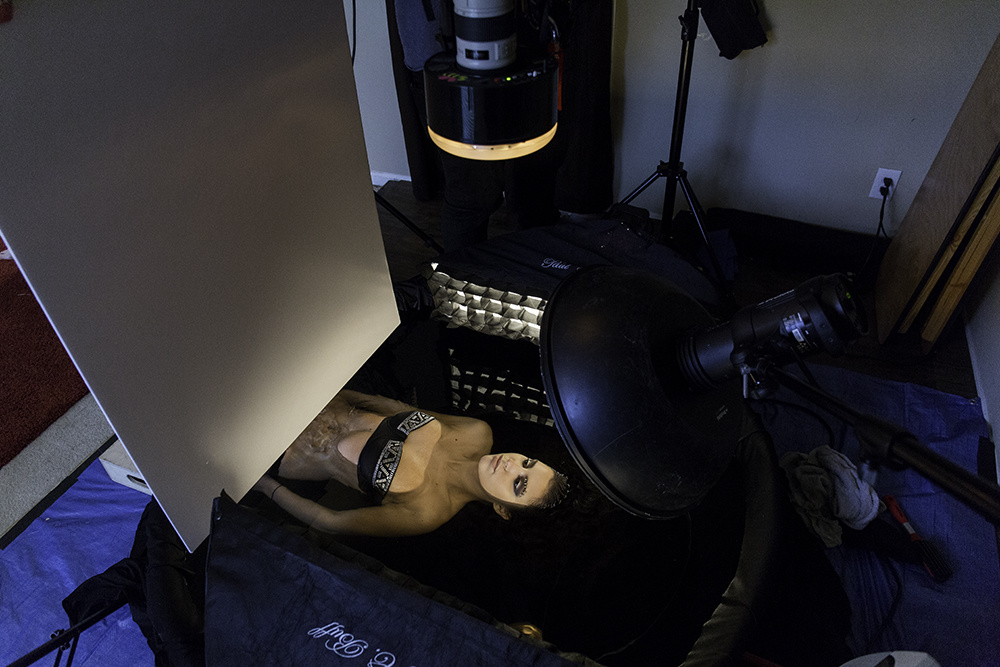 We decided to “lock” the model into place by adding a white piece of foamcore below her chest to reduce shadow density under her chin. Although it played a small role, it was crucial to fill the black shadows.

The model was briefed long beforehand, our intentions were made clear and my team made all the proper precautions. Safety was our absolute number one concern; the boom stands were weighted with double the sandbags, the light cables were gaffed down and we made sure to keep the walkways clear. And, I’m always prepared on the backend with the proper insurance and releases. When dealing with these types of setups, safety must be a main concern; never sacrifice safety for speed or poor pre-production.

To keep the water at a luke-warm temperature we continually poured hot water into the pool, but once the model stepped into the water, it dropped quickly. Eventually, the model became cold in the water and began to shiver. I immediately called for a space heater to be placed under the key light and I made sure to turn up the modeling lights to create more heat. By the end of the shoot my studio was breaching 95 degrees(Fahrenheit) and felt like a sauna. But, I know it’s important to keep the model comfortable, warm, hydrated and fed at all times; a rule that is consistently kept in the back of my mind, every shoot. 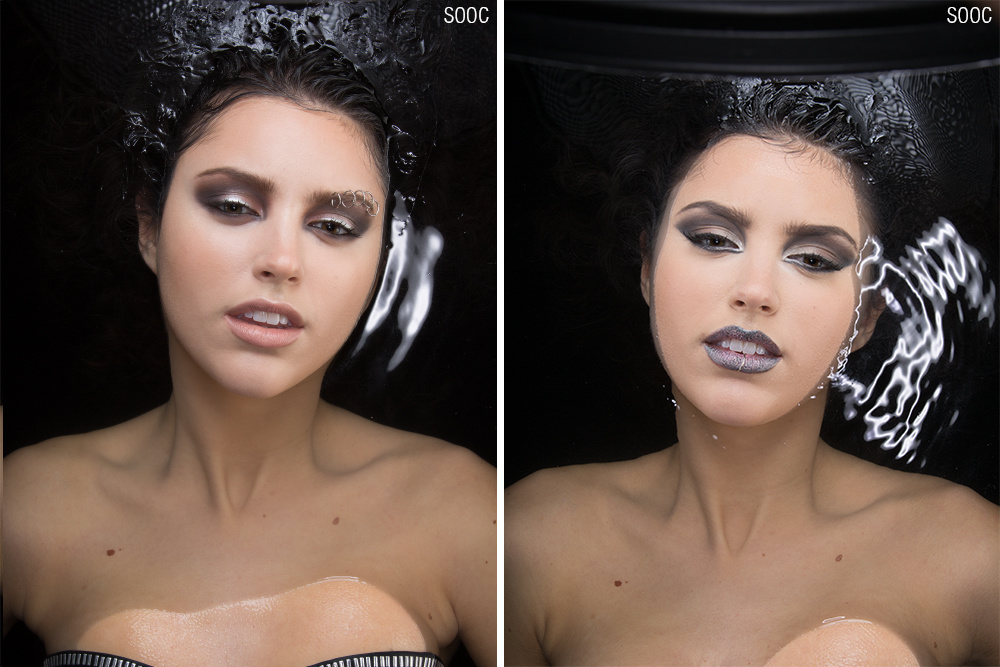 We tackled a total of three looks, and I knew we had the shot we needed. We carefully broke down the lights and emptied the pool bucket after bucket. I wasn’t handed an easy scenario, but I certainly think we delivered a photograph worthy of a silver platter. My clients love to see creative work like this and in many cases contract me to do the same for them. I challenge you to a unique beauty or portrait session. Create light outside the box and a future client might be waiting to love it and pay you for it. 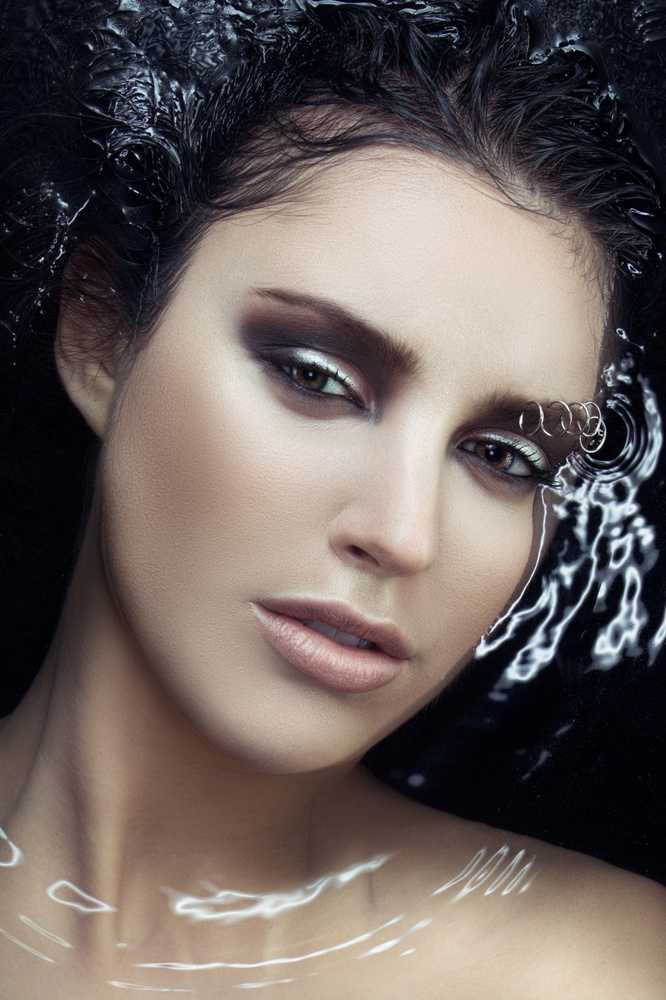 Very nice article, as usual. Even if the setup is quite complex, the result worth it.

Thank you for reading Erwan!

Not a rockstar, still a student of the craft just having fun! Thank you Wayne!

Google Mark Seliger Fiona Apple for the picture, one of my favorite portraits ever.

That is a killer shot! Love the lighting!

Right on David! I'd love to see what you came up with.

Can we see it?

great behind the scenes. Water is on my to-do list this year and this definitely helps wrap my head around the logistics.

sidenote: all hail the Camranger! love that thing

Heck yea! Thanks for reading Justin. The CamRanger is everything to me! :)

OOPS! FAHRENHEIT! I'll make that change. Thanks for pointing that out.

We recently shot under similar circumstances - but took a different route. We decided against studio lights because of the safety concerns you mentioned, as well as lack of space to place some stands. We ended up working with a single repeatedly pulsating speedlight (basically flash painting), which worked surprisingly well (http://obsoquasi.ch/new-photo-floating/).

I remember when you explained this to us online....no small feat. Even with meticulous planning you really couldn't know exactly what it was going to turn out like. It was a calculated risk that resulted in a great end product! Glad to see this again!!

Thank you as always Jason! It was a tough shoot, with a great pay off.

one word Amazing
very inspiring article thank you for sharing

Thank you Niels! Cheers my friend!

I just wanted to say thanks for sharing the SOOC shots. It's nice for those still continuing to grow to see stuff like that. Despite knowing that the image isn't finished in the camera, sometimes you need a reminder of how images start out.

Nice work all around!

Thank you for reading!

"Unfortunately, we couldn’t just jump in the water" ... yeah right, you couldn't :P haha. Very nice work and thanks for the details / story ;)

I would totally jump in the water, but my cannonball need work. Thanks for reading my man!

my english language comprehension is not good enough to understand what you mean with your cannonball, but let's just leave it like this ok? :P

Interesting article and setup - It is quite a complex setup. Here's a shot I did outdoors in natural daylight (late afternoon light) in the ocean. I feel like a similar feeling has been achieved but with a lot less setup/safety concerns. However I can certainly see the advantages of having a setup which is repeatable 24/7 and indoors where the water is a bit warmer. Here's the shot if you are curious: https://fstoppers.com/photo/14172 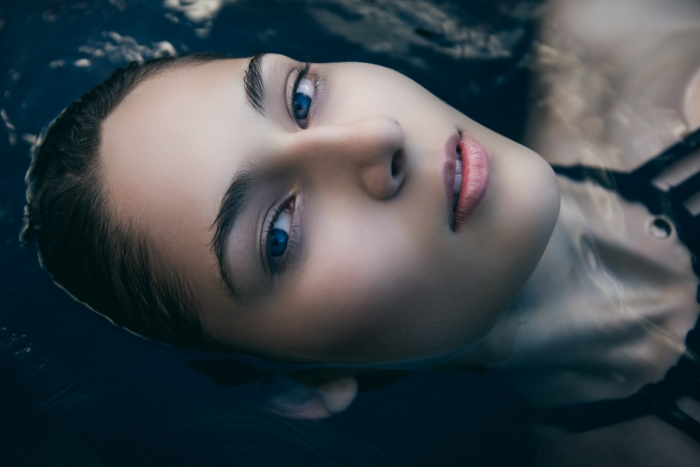 Awesome shot Janaka! I would of loved to set this up outdoors, but the model would be freezing, and I can't have that. Thanks for reading and sharing!

First, Im a big ffollower of your work. Its great and I applaud your willingness to share. Its an intriguing project and perhaps you took more safety steps than mentioned but extra sand bags and a warning to the model doesnt seem to be enough of a safety plan. She obviously survived, but I'd sure look at using battery packs (or better yet battery powered strobes) rather that 110v house current (as the image appears to indicate was used) and for sure I'd be using GFI outlets. I'd also have safety leashes on the heads to assure they couldnt reach the tub.
Knowing your attention to detail, I can see why it all worked, but for those considering such a shot, and perhaps using volunteer models and assistants, more would seem prudent. Somethin akin to train track location shots. You'd tend to think nothing could go wrong, but then there's the .001% of the time that not enough went into the contingency safety planning and here we are wondering why on earth they would even try such a shot.

Thank you for checking it out Lor! There is always a safety concern working with any setup. We just have to do our best to make sure we are prepared for the worst. Looking back, I probably should have used battery packs, but I needed the modeling lights hot to warm the model and water. Unfortunately, my packs just can't handle full blast everything. Thanks again!

Also did something similar a while ago but with a much simpler setup and... different mood :) 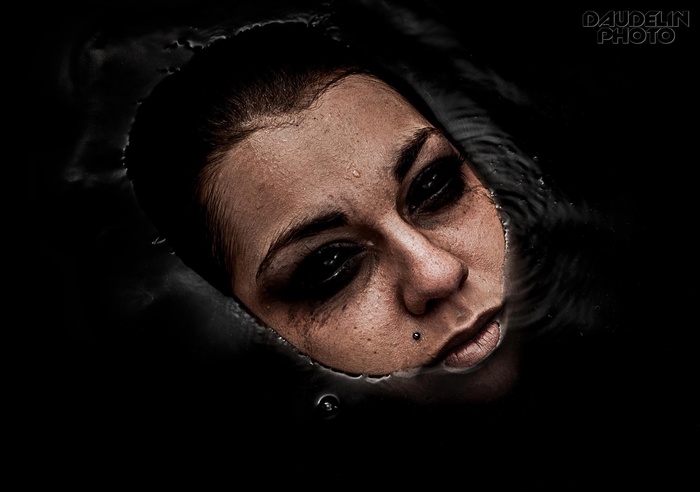 Original !! although I'd be a little worried about being electrocuted surrounded by all these lights ;-)

wow, i don't think i've seen anything like this. both lighting and setup.

Umm.., WOW!!! I don't know if it is your lighting set up or post production, but the water almost looks like plastic, which adds that surreal "editorial" look to these photos. Thanks for the detailed explanation of how you set up this photo! Great post!!!