by Patrick Hall
Awhile back we shared a few videos of photographers intentionally throwing their cameras in the air. Well now the Throwable Panoramic Ball Camera actually makes that feat much easier. The new camera allows photographers to create 360 degree images with 36 individual cameras arranged in a buckeyball shape (any organic chemists out there?). Using an accelerometer, the spherical camera takes a photo at the apogee when there is the least amount of movement for surprisingly sharp images. It's also made of soft collision material which just begs you to throw it at someone's face or fling it with a water balloon launcher. The whole project is pretty interesting, and you can read more about it on Jonas Pfeil's website.

by Lee Morris
I just wanted to give our readers a little heads and let you know that both Nikon and Canon plan to announce new cameras this month. Canon is rumored to announce a 1D series camera (their pro sports camera) on Tuesday October 18th. The camera will have around 16mp and will shoot around 12fps. Nikon is rumored to release the extremely anticipated (and late) D800 but is rumored to completely change the direction of this camera from a cheaper D3 to a D3X killer. The D800 is rumored to be announced on October 26 and have a shocking 36mp sensor. Have these camera companies completely switched direction? I thought Canon was all about MP and Nikon was all about ISO performance. We will just have to wait and see.

by Patrick Hall
Using drone octocopters to take breathtaking aerial footage is nothing new. But what would the results look like if you could combine a stabilized drone with ultra high def 5K footage from the Red Epic? That's exactly what OMstudios did with their self proclaimed "OM-copter". By using the drone, directors can now produce stunning high def and slow mo aerial shots without the high cost of renting an actual helicopter. Of course you have to be able and willing to secure a $58,000 video camera to a remote controlled octocopter in the first place! Check out the OMstudio Vimeo Channel for some great commercials and other video projects.

The OM-Copter gives wings to the Red Epic from omstudios on Vimeo.

by Patrick Hall
A new photoshop algorithm featured at the Adobe Max 2011 is almost too good to believe. Somehow engineers have figured out a way to take extremely blurry images (by photographers' standards at least) and render them sharp and usable with the click of a few buttons. The goal behind this software is not to fix improperly focused images but rather to fix motion blur caused by a shaky camera or a slower shutter. The crowd's reaction at 1:18 is worth watching this video alone but if this technology ever makes it to future copies of Photoshop then this will no doubt rock the digital world in a way we've not seen before.

by Patrick Hall
Well the title pretty much says it all and you only have 3 day left to enter! Fstoppers is excited to announce a new twitter contest where you can win one of the brand new Apple Macbook Air 11.6" Notebooks. Click Here for details on how you can enter the Fstoppers twitter contest and win this macbook. Also make sure you enter before the end of October 12th since we are announcing the winner the following day.

by Lee Morris
Everyone was a little let down when Apple announced an iPhone "4S" rather than a brand new "5". Aside from being a little faster, the iPhone 4S also has a big jump in the camera/video department. This new camera is 8mp and shoots at 1080p with built in vibration reduction. Check out the video below to see what this little cellphone is really capable of. Update: The video was pulled a few minutes after I posted it. To see the video you can head over to Apples site and scroll down to the video section: http://www.apple.com/iphone/features/

by Lee Morris
Don't you hate it when your camera can't stand up to the weight of your pet elephant stepping on it? Ya me too, that's why I only buy Phase One (I mean I will after I win the lottery). Although this stupid test is fairly impressive, I would much rather see a drop test, as that will be the real issue for photographers and the durability of their gear.

by Lee Morris
Ryan Enn Hughes just submited his entry for our BTSV contest and it is quite impressive. Ryan teamed up with The Big Freeze and set up 48 D700 cameras in a circle and then fired them all at once as dancers did their thing. The photographs are pretty cool on their own but the real magic happened in post during the editing phase when Ryan teamed up with sound designers at Zelig Sound to create two incredible 30 seconds videos. Obviously this is an extremely high budget project but our contest will not be judge on that so don't be discouraged if you don't have 48 $3000 cameras to play with. As always, you can check out all of the submissions to our contest as they come in here on our forum. 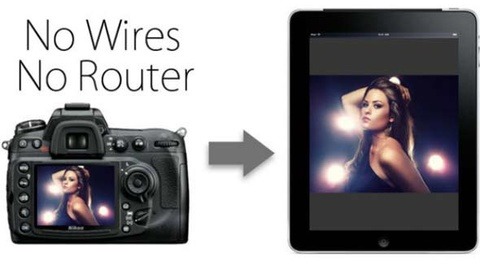 by Lee Morris
Last year I released a video explaining how to wirelessly tether your camera to an iPad by jailbreaking the iPad. Since then Eye-Fi has released a firmware update that makes wireless tethering possible without the need for jailbreaking. Now, not only is the whole process much easier to set up, it is also much cheaper because you no longer have to pay for the more expensive Pro Eye-Fi card, you can make this work with the cheaper Connect X2 card.

by Lee Morris
In Jay P. Morgan's newest video he shows us how he uses a crane to bump up production value by using a crane. Now I know you might be thinking there's no way you can afford a crane but you would be wrong. Last month we posted this video review of a $125 crane that anyone can afford. I purchased one and I am really excited to try it out in the near future.

by Lee Morris
Now this video may be over many of your heads (it is definitely over mine) because most of us are still photographers who may only dabble in video but this is still worth posting. In the video below Video Copilot shows us how they filmed a car chase scene in the studio with a green screen. I've never shot anything on a green screen before but after seeing how easy this is, I may have to give it a try.

by Patrick Hall
Have you ever wondered how DSLR cameras match up when compared to film and high end HD video cameras? Last year, Zacuto brought together some of the biggest names in the movie industry to see how well the first round of video capable DSLRs compared to the industry’s standard film and HD video cameras in The Great Camera Shoot Out of 2010. This year they have started another series which compares some of the top cameras including 35mm Kodak 5213/5219, Arri Alexa, Red One M-X, Phantom Flex, Sony F3, Panasonic AF100, Canon 1D Mark IV, and Nikon D7000 (where is the D3s?), and a bunch of other professional video cameras. The Great Camera Shootout is a must watch if you are a gearhead or simply enjoy seeing how well the current crop of DSLR cameras are at video. In this video they goal was to compare the overall noise sensitivity and perceived sharpness of different cameras. You might easily got lost in the technical talk used in these discussions (unless you really study this sort of thing) but nevertheless it's pretty interesting to watch as a photographer or film maker. You can also watch other Zucato Shootout Episodes Here.

by Lee Morris
A few months back I posted another video by "Betty Wants In" that involved skydiving in ultra slow motion. The video was created with the GoPro video camera and software called Twixtor that can create frames for a very realistic slowmotion look. This time they have created a very different video using the same technique. Enjoy this amazing look at the sport from the safety of your office.

by Lee Morris
A few months ago I purchased a Nikon D7000 and MB-D11 battery grip from Amazon.com. The order was fulfilled by ANATOLIAN BOOKSTORE, INC and two days ago I figured out that this grip is actually a fake. Check out the full post to see high res images from every angle of this grip.

by Lee Morris
I just stumbled upon another interesting video filmed with the GoPro HD video camera. It's not really an informative video but hopefully it will give you guys some inspiration. You can easily film things with these ultra small/light cameras that simply were not possible a few years ago. What could you film in a different way? Update: Sorry about the title. I've not heard of "squash" before.