Perfect for Gimbals: Using Your Phone as a Monitor

The biggest downside to using a gimbal is losing basic controls of the camera. Sure, you can use a monitor, but you can't actually control the camera. Could your phone fix this problem?

B&H has an insane deal on Manfrotto's Canon remote. Designed for use on a tripod, I'd considered replacing a handle on a gimbal with it. That way, I could control my focus and exposure without needing to touch the camera.

It's the inherent problem that comes with a gimbal. If you try to touch and move the camera, the motors will fight against you. Sometimes, this leads to turning off the gimbal, changing your settings, and then starting it all up again. There's got to be a better way right?

My solution was to install DSLR Controller on my phone, plug it into a Canon DSLR via Mini USB, and use that instead. Not only could I monitor the scene, but I also had full control over the camera, and I could review footage from the phone. No more hitting record, no more focusing blindly, and no more turning the gimbal upside down to see the screen better. If I placed my phone near the center handle, I could keep my two hands on the gimbal and use my thumb to hit record, change the exposure, picture profile, and just about anything else.

The cost? Well, I used my bike mount from Joby, which is a real trooper. One Amazon reviewer claimed that they fell off their bike, and their phone still clung on to the handlebars; which is why it's worth $35. Then, I used an old Mini USB cable and the USB-C to USB-A adaptor that Google provides with their new Pixel phones. That's it! 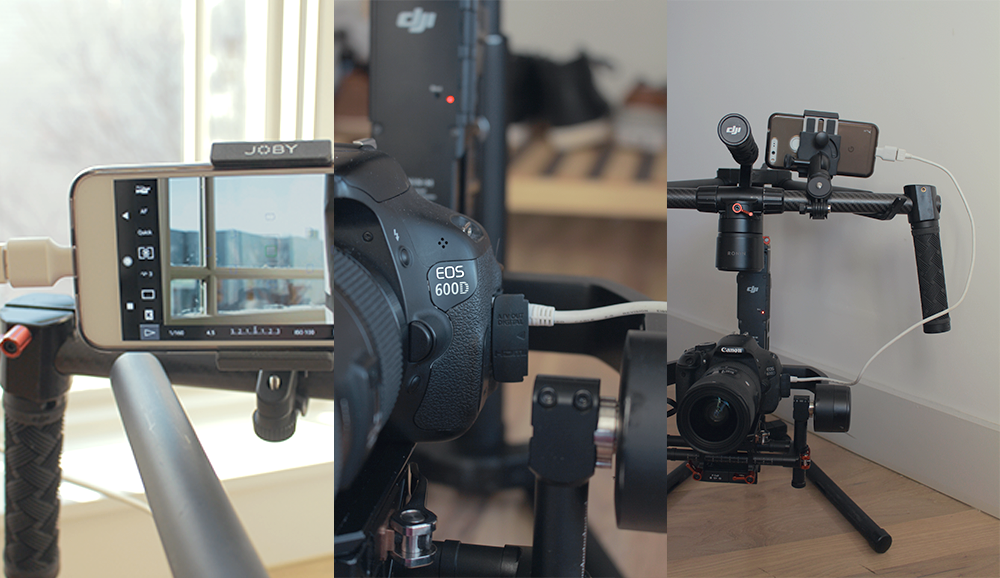 Controlling the camera works just fine, but monitoring the scene doesn't come without its fair share of lag. For a fast-paced shoot, it can get frustrating, because if you're running with it, then you're always a few feet behind on the monitor. However, if it's a walking interview or something simple of that nature, you'll likely get away with it. If you can get over this, then you'll save yourself a few hundred bucks and gain more control of the camera than ever before.

Supposedly, this will work well with most Android phones that were made past 2015, and luckily, the developers have a free app that acts as a shutter in case you need to test your phone's compatibility first. If iOS users want to do this, then they'll need to buy Manfrotto's Digital Director. It appears to have less lag; however, it will cost you around $270. 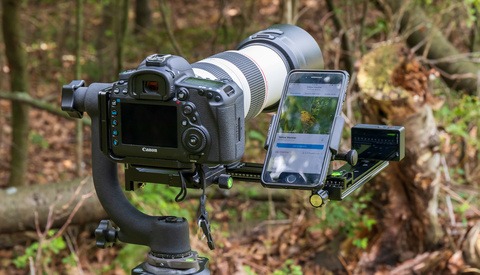 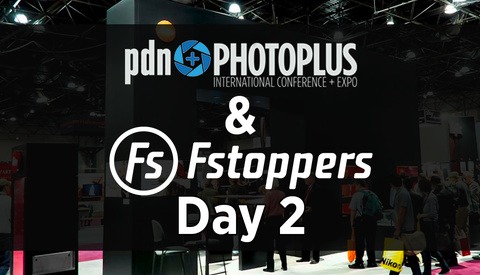 Does having the cable connected to the camera and phone affect the balance and stabilization?

I'm using a smallHD DP4 for this with a rather thick HDMI cable on my Ronin M and it does not affect the quality of stabilization.

Not very much at all, I usually just double check if it's affected the roll.

I've been using this with my 5D2 and my Samsung Note 4 for a while now and the lag is very minimal ... probably half a second or less. Getting a GOOD USB cable (like the one that came with your DSLR) apparently helps reduce the lag considerably.

Now, I haven't used it for any action scenes or things of that nature (I do mostly interview type videos) so your mileage may vary.

You could get a new Samsung Tab E Lite for 100$Can and run this as a proper monitor / controller for less than the cost of a CHEAP field monitor from Neweer for example and the tablet has extra functionality that a field monitor won't have (control of the camera, copying media from the camera for backup or editing, use as a portable portfolio, slate (with app), storyboard holder ... so on so forth).

This is assuming you dont; already own a tablet or phone ... otherwise you already have 95% of what you need right now so the cost drops to almost nothing.

One MAJOR issue I have with this setup is starting and stopping recording ... it can take several seconds after you tap the record button for ti to start or stop recording. Like I said, for interview type videos, that's not a major issue but is something to consider.

I'm sure the screen on the Note 4 is better than my 5inch one, hard to compete!

Is it easy to take a call if the phone rings? That must be the real question.

That's a very good point.. I have a smartwatch on set for that sort of issue, in general, so it's never dawned on me.

When doing a shoot, I put my phone on airplane mode anyway. Who wants a take ruined by a phone ringing. :p

Of course a bluetooth headset could solve that issue as well.

Didn't lee have that happen on a Iphone shoot once ...

My friend uses a tablet. Nvidia Shield K1. He said the iPad mini is too big.

Unfortunate that it needs an IOS device to be Jailbroken to work.

I've done this as well with android dslr controller in the past, since the 60D. Now the Panasonic GH4's default android app rocks. It has nearly full control of the camera, and very minimal lag even over wifi. Just used it today with a Kessler KCLite jib. Touch focus control, start/stop video, menu function controls. It's always been very reliable in my experience. I keep old Note 3's that aren't in service with super cheap batteries that last hours and hours. It's great for just framing and camera control. 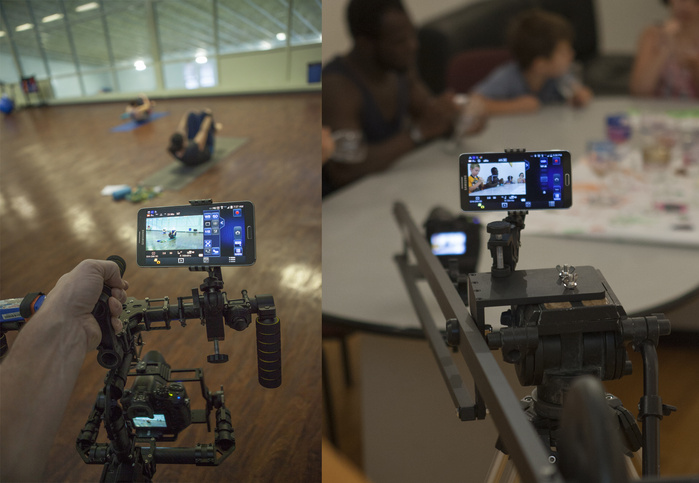 Speaking of deals and gimbals, B&H is selling the Ronin-M (used in this article) for $999 right now.

http://dslrdashboard.info/ ($10 for Android & iOS) could also do this: USB or Wifi with most Nikon, Canon, and some Sony cameras.