When looking for new creative ideas, it seems like everything has already been done by someone. But there are still people, like Jay Philbrick, that manage to create pictures never seen or even never thought of before.

Climbing photography is quite impressive for those that aren't initiated, but it remains somewhat ordinary, as many outdoor sports and activities magazines require such images. What is a bit less common is seeing a ballet dancer or even more crazy, a bride and a groom standing on the edge of a cliff to have their pictures taken.

Jay Philbrick and his wife, Vicki, have owned a photography studio in North Conway for twelve years. Jay had the idea of placing a bride on the side of a cliff way before he became a photographer. The idea came up while he still was a full-time climbing guide. Then, a couple of years later, after he had launched his wedding photography business, a couple mentioned their passion for climbing. That is how the first bridal session on the edge of a cliff was brought to life. This was the only time the bride and groom were climbers. All of the other bridal sessions of that kind — 4 or 5 to this day — were with people like you and me, who had never really climbed before. 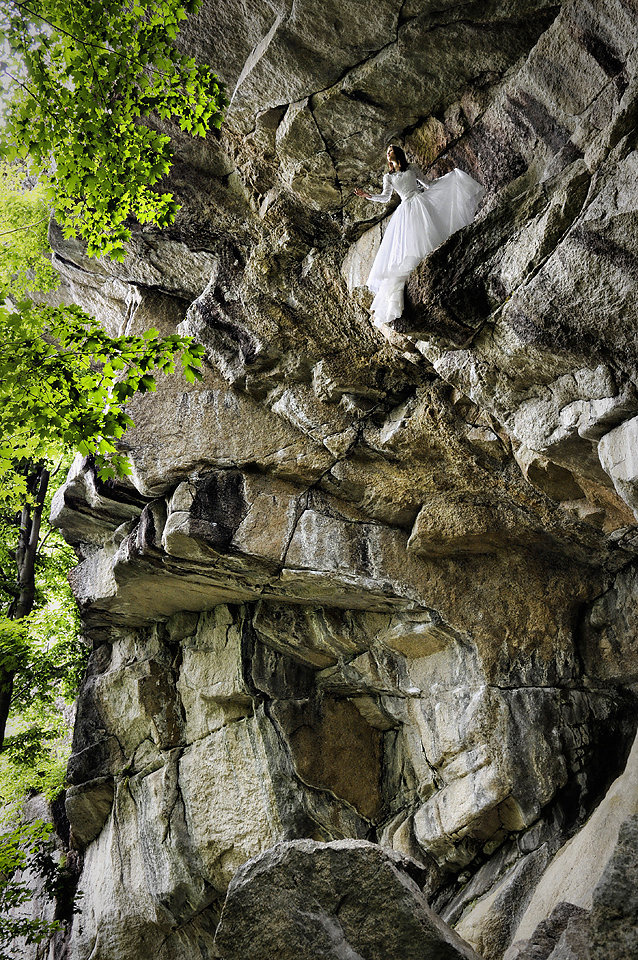 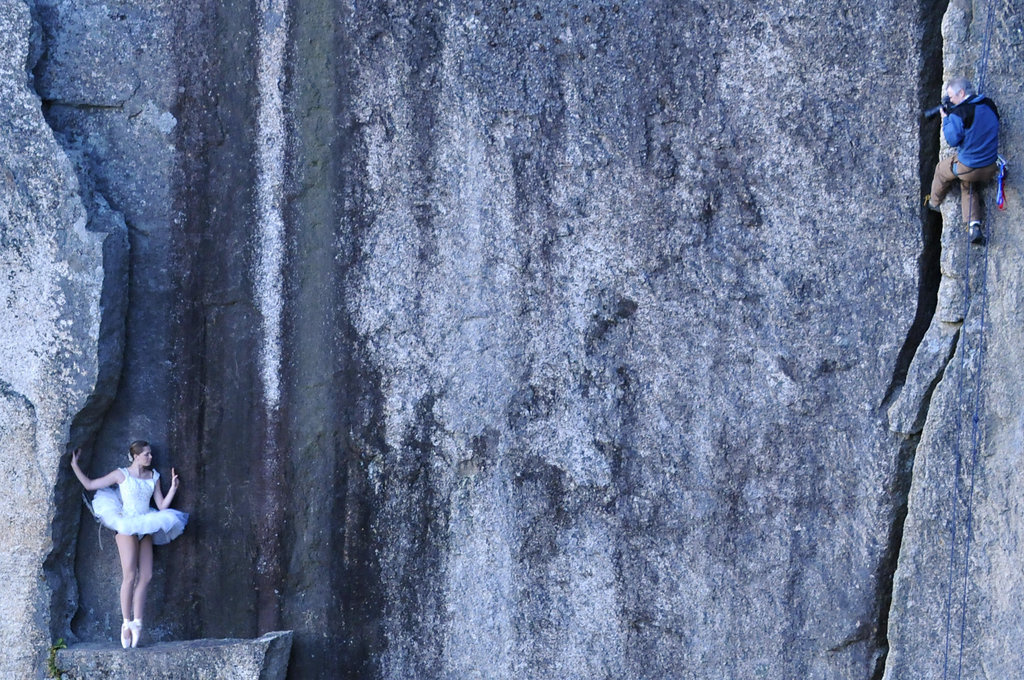 From what Jay explained to me, the organization behind these sessions is closer to what you would expect on a commercial shoot rather than on a bridal session. The sessions start usually well before the sunrise so that the couple can be in place before the sun comes up. This way, they can start with the beautiful morning light and then catch the sunrise, if the location isn't too foggy. 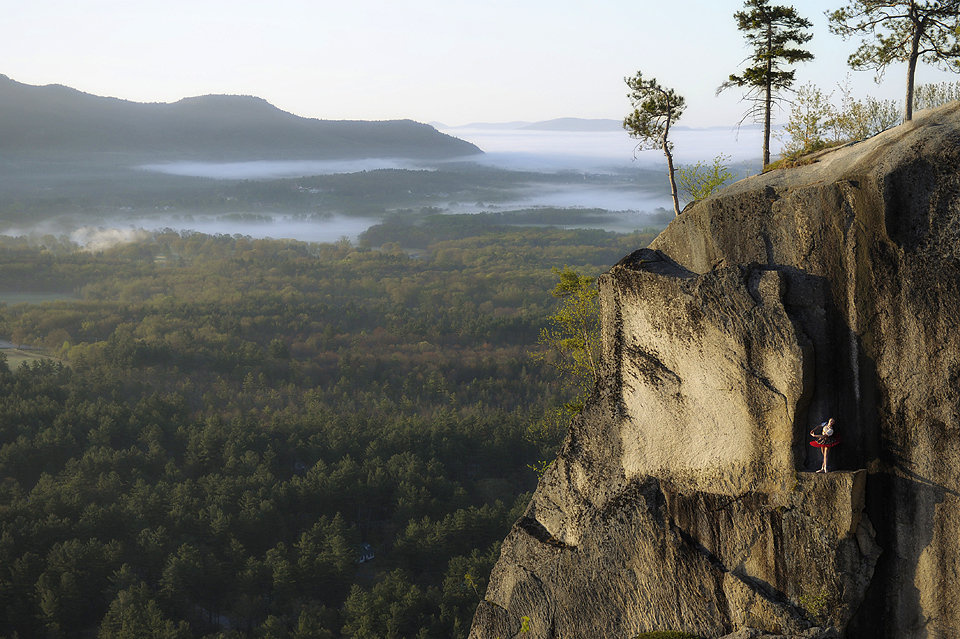 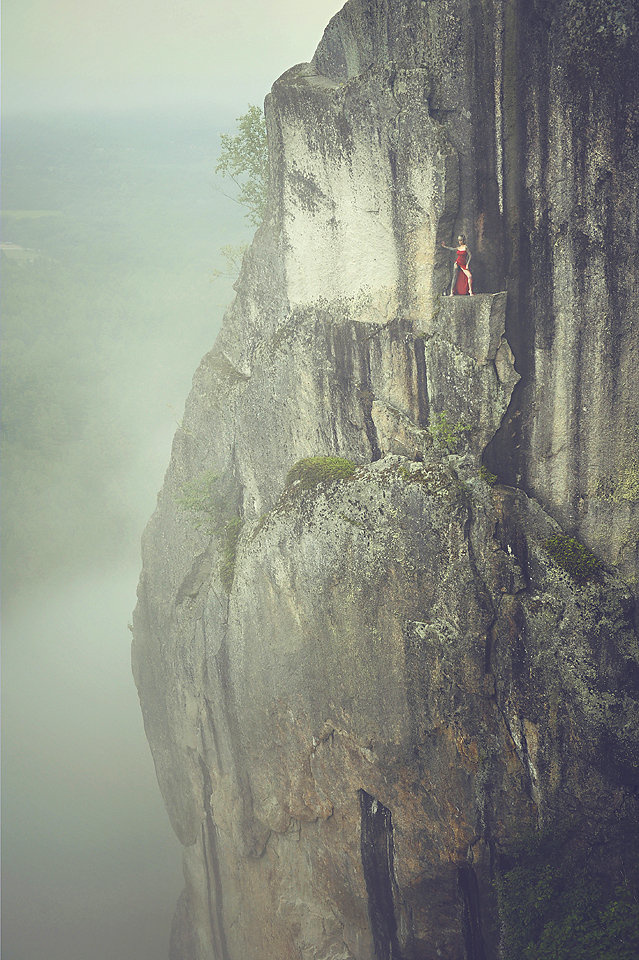 Despite his past as full-time climbing guide, Jay works with a highly trained mountain guide for the rigging and safety work, because of course, safety comes first in this kind of session. The guide, Marc Chauvin, and Jay usually start at about 3:30 in the morning, building the anchors and the raising/lowering systems. The bride and groom (or dancer) usually don't have to do much to go down to the ledge. They are brought down with one rope (a second one is also attached for safety) in a way that they almost have nothing to touch or do. Also, if the dress is too big to be put on before going, she will have to put it on with the help of the guide while on the ledge. 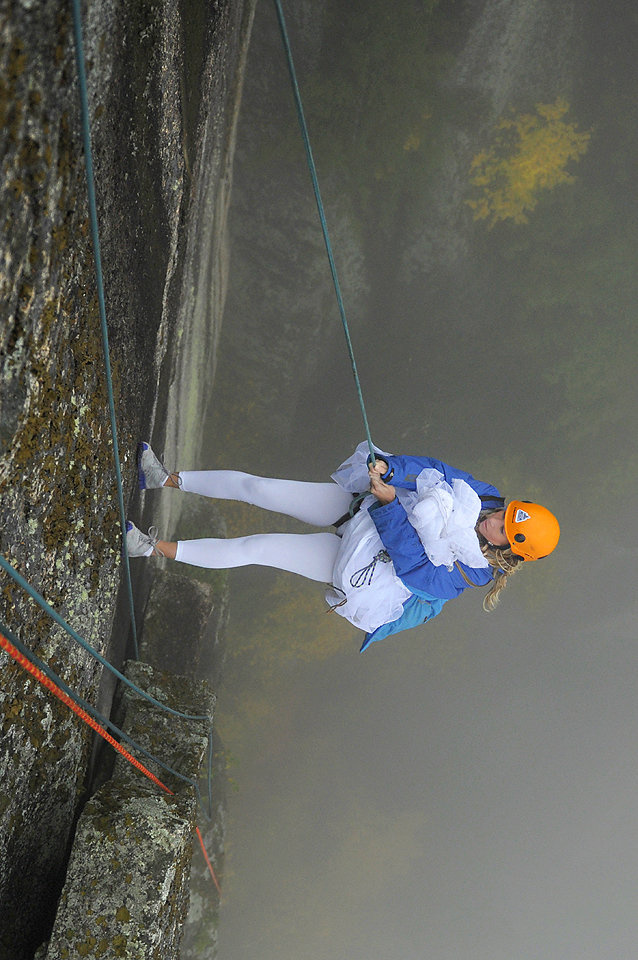 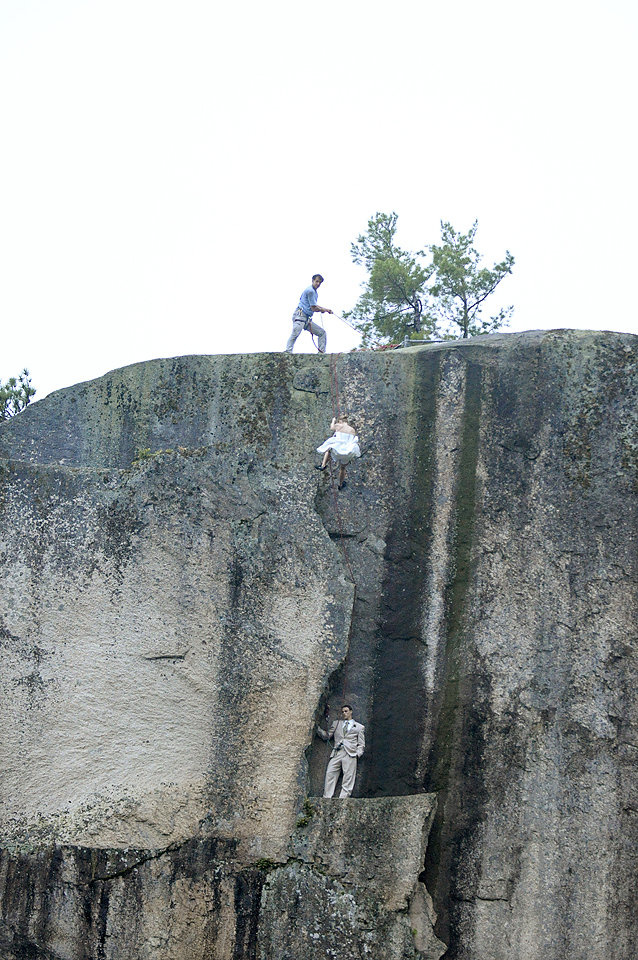 Once the bride and groom are in place, the photo shoot really starts and lasts for about 90 minutes. With the help of his wife and their assistant, Jay will photograph the couple. Each of them has a different angle and lens to create a variety of shots. They have to pose the couple and change their angle to try to hide the ropes and anchors as much as possible, as they want to avoid losing time Photoshopping them out. 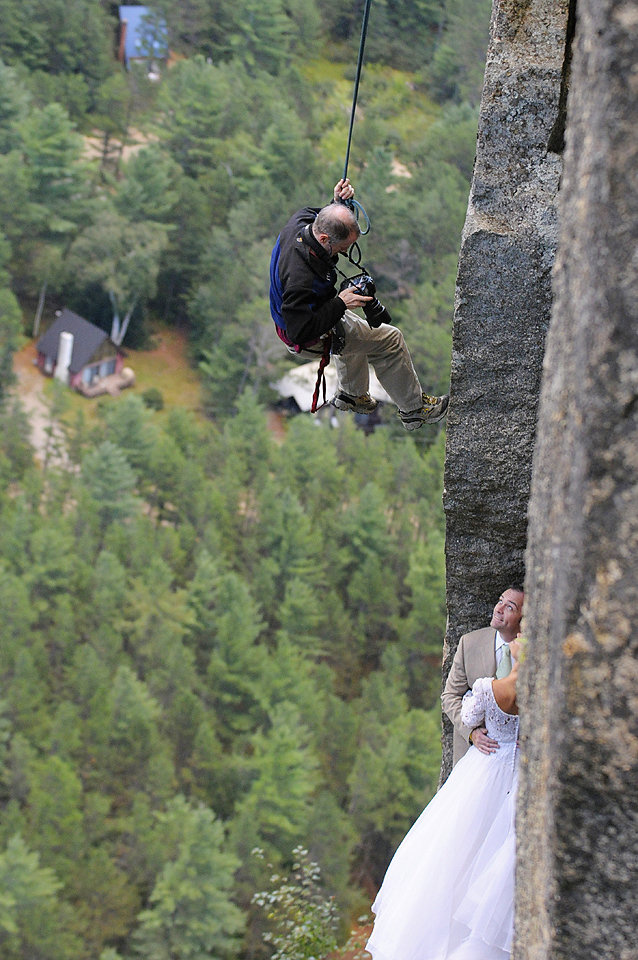 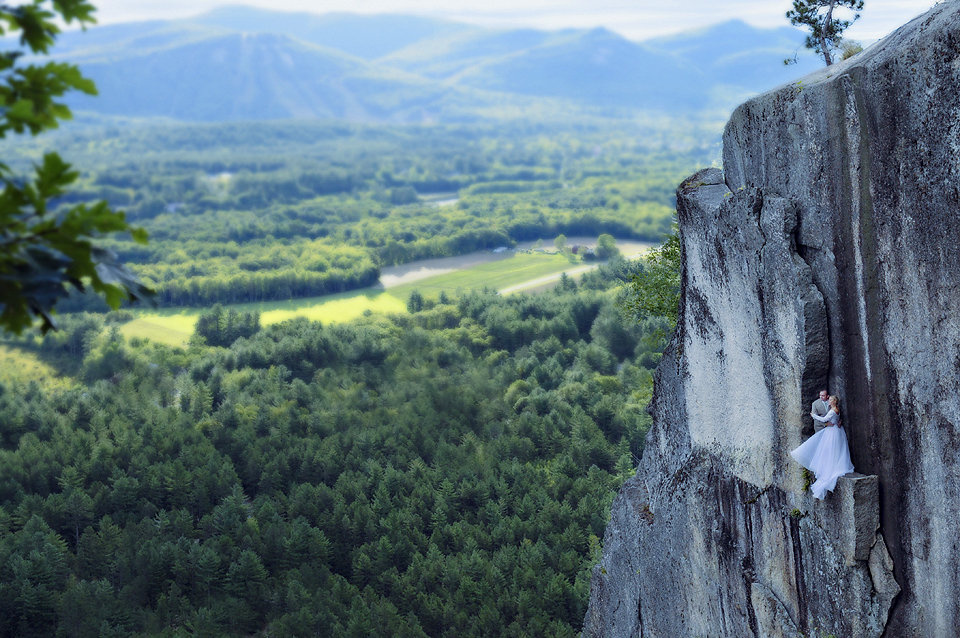 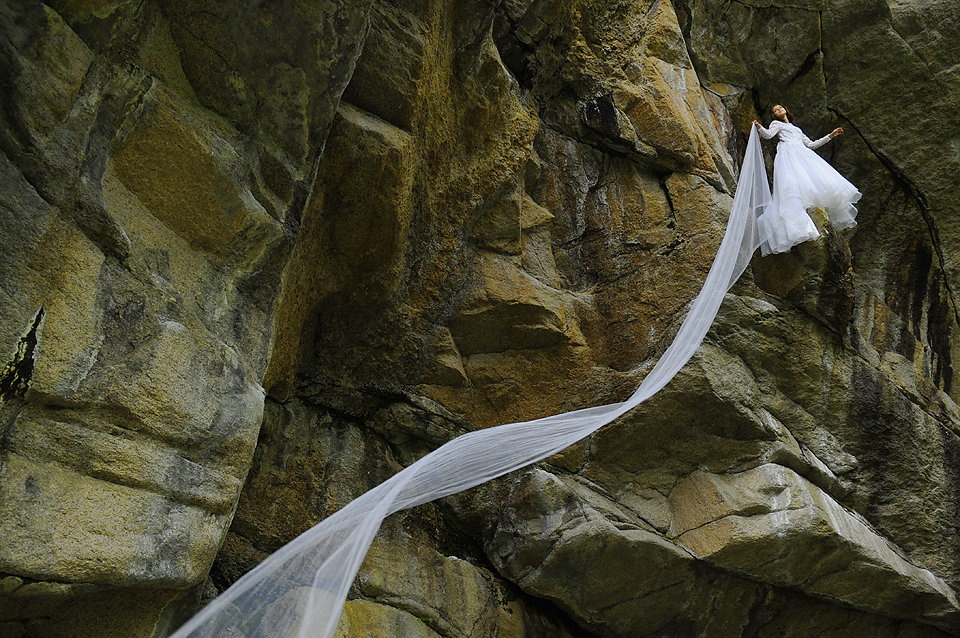 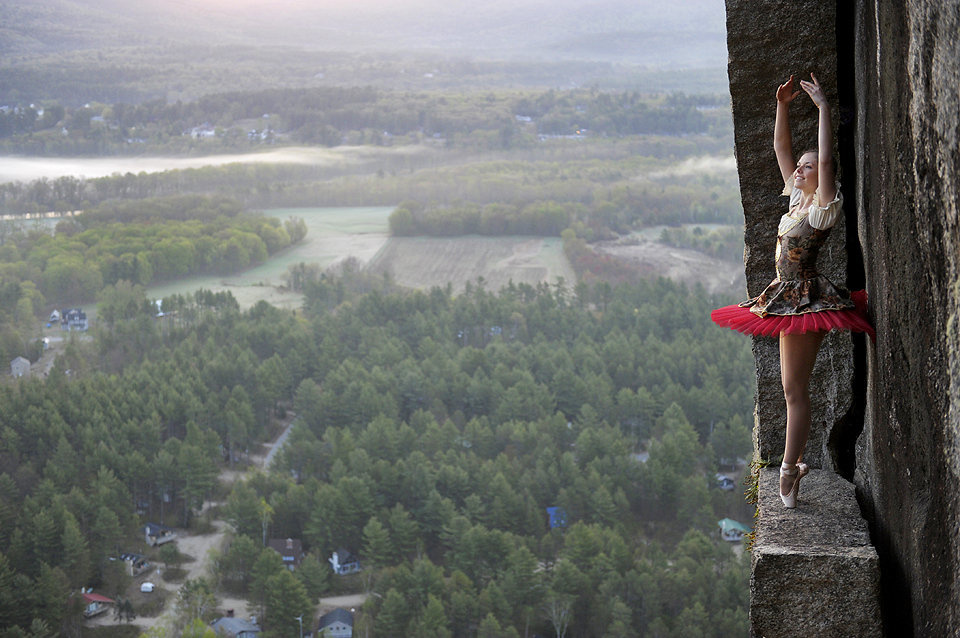 To see more of Jay's and Vicki's work, head over to their wedding & portraits photography website.

Images used with permission of Jay and Vicki Philbrick. 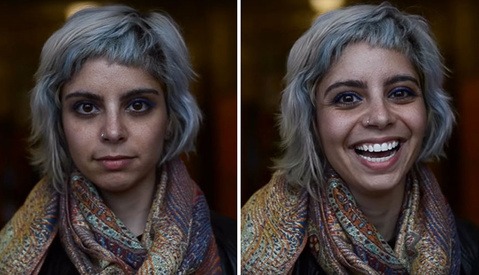 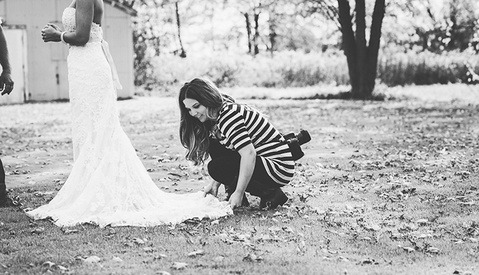 How To Become A Professional Commercial Wedding Photographer
With Lee Morris and Patrick Hall
$299.99

New
Living Stills: How to Animate Your Photos
With Shavonne Wong
$89.99
Log in or register to post comments
17 Comments

honestly these pics isnt that beautiful to risk so much

Risk? If you know what you're doing those pictures aren't so much risk. It's riskier to shoot someone in the city a get hit by a car than doing that. As you can see the dancer/bride/groom are always secured by a leash..
I like the pictures very much..

" It's riskier to shoot someone in the city a get hit by a car than doing that."

You practice standup as well, I see...

So you never rock climb before?

do i need to climb to see how bad are these pics?

Are they that bad? Or because you didn't think of it, they are. Also rock climbing is relatively safer than most extreme sports, ex. snowboarding. Pictures are actually really good. Nice to see some originality these days.

This is pretty hardcore! I really like this concept.

Not impressed at all by the images... Nada!

On the one hand, you gotta admire the memory he's creating for clients.... "Remember that photo session where we went out on the cliff face? Exhilarating! I can't believe we did that!" That's not a memory created in a studio where they are Photoshopped into a scene.

But on the other hand, I do wish the images were as epic as the experience...

Wow - I really like the idea and the juxtaposition works.

I like the idea of that cliff, why not if people want it great :) but being Jay and Vicky I would try to change at every session something so they do not look the same way... And I agree with comments here that for such a great location those images I have seen so far are nothing special IMO. If you erase the location where they are standing there is nothing emotional, exceptional or romantic... I miss real feelings and interaction among those couples. Energy is not flowing... If you look at images of Yervant or Jerry Ghionis there is that life in the images... here, there is that deep fall scary look which attracts people to look at them...but the rest is kind of missing for my taste... Great idea in a perfect location yet need some improvement in accomplishing the final touch in it... expressions !!! Just my 50 cents.

people must have that post xmas blues here today. i think they are original. yes maybe they all look the same but if your the bride or the dancer they are one of a kind for you. how is this any diff than other photos having a signature spot or pose ? it's not. i don't see how there is much risk involved, everyone is tied in and plenty of rope.

The risk is high and the danger is there also but If the couple really wants it? Then you have no choice but to do task but you just have to make sure that there's a signed waiver before doing it.