Protests Are Iconic, So Why Do We Want a Riot?

If there is one type of news story that is a recurring theme in journalism it is the protest. Think "Tank Man", "The Burning Monk", or "Taking a Stand in Baton Rouge" (with Ieshia Evans). They stick in the memory, their iconographic status forming a peg from which we hang related memories. So why then are we more interested in riots as opposed to protests?

Riots and protests, protests and riots. We often think of them as going hand in hand when, of course, they are not necessarily intrinsically linked. Protests, by definition, are about expressing an objection and in democratic societies that is a right usually enshrined in law. Many — perhaps most — protests are peaceful large-scale gatherings that express a profound disagreement often with the government. In the UK it was estimated that up to two million people protested against the Iraq war on Sunday 16th February 2003. Notable protests by individuals can hit the headlines, such as Nelson Mandela's 27-year incarceration in prison (1963-1990) or Brian Haw's 10-year anti-war peace camp in London's Parliament Square (2001-2011). 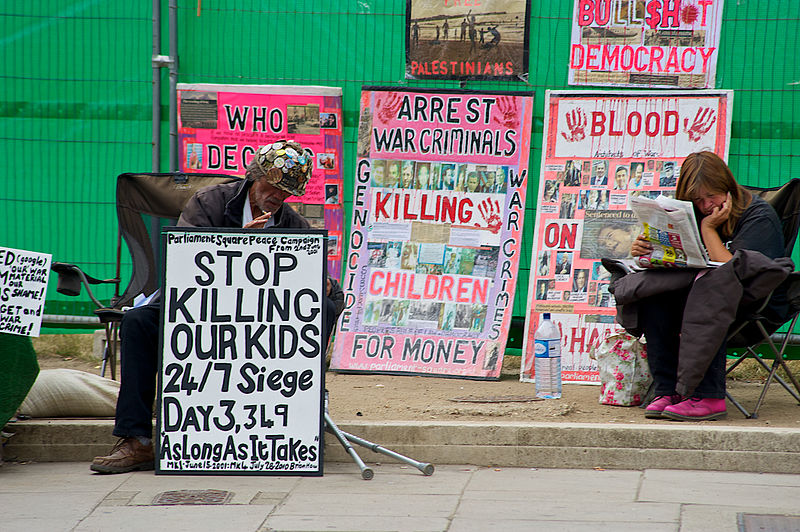 Perhaps more intriguingly from a photographic perspective, protests often produce iconic photos and the list is long. Insider has a collection of the most influential, which includes "Tank Man" and "Taking a Stand in Baton Rouge". Interestingly, from the 21 October 1967 anti-war protests, "Flower Power" makes their list rather than the more widely reported "Ultimate Confrontation" which is far more emotive, although both are strong.

A riot is a violent disturbance involving a group of people and it's perhaps not surprising that protests can turn into riots. Mixing large numbers of people in any environment can spawn violence regardless of why they are gathering. Mixing large numbers when they are protesting can be even more volatile, particularly as governments often choose to deploy anti-riot police or troops for crowd control. For whatever reason then, protests can lead to violence and rioting. Just look at the 2018 World Press Photo by Ronaldo Schemidt which shows José Víctor Salazar Balza catching fire during protests in Venezuela.

The Charlottesville Car Attack is shocking for what it shows at a personal level, for the individuals involved. In this instance, it was a peaceful protest against the Unite the Right rally where James Alex Fields, Jr. drove his car at the protestors, killing Heather Heyer. It is an incredible photo because of the implied trauma it shows. At first, the eye sees the vehicles and the crowds; if you don't know the photo, you are trying to make sense of it, trying to fit it into visual norms. Except it doesn't. You then might see the two upended people, the phone in mid-air, and three (different) shoes on the ground. There is a bare-footed person on the ground on the right and what looks like someone's head on the left. You recognize a scene of carnage and your mind fills in the preceding and succeeding seconds and minutes.

Looking at images of riots available in the Library of Congress, it's notable and surprising that they appear relatively late. The earliest images I could find were from the Philadelphia General Strike of 1910 which protested poor working conditions. Archived in the Bain Collection, they form part of 50,000 images from one of America's earliest news picture agencies. The initial strike developed into rioting which spread across the city. The first image is a general scene captured during the rioting although there is notably no single focal point for it. The second shows rioters stoning a tram that was being driven during the strike; while there is focus (the tram) it is initially difficult to work out what is going on.

Images of Protest and Riot

Images of protest against authority are recurring themes in the examples above and more broadly; again, think of the likes of "Tank Man", "Ultimate Confrontation" and "Taking a Stand in Baton Rouge". However, their representation is far more iconographic than they might at first appear. While they are clearly and obviously of a person or people at a single point in time, the reason they have become iconic is because they are representative of both the general notion of protesting, as well as the specific protest in question. What they don't represent, in terms of their record of history, is what happened at that specific point in time.

The three images introduced at the beginning are iconographically identical: they show an individual standing up against a (perceived) government power. They are all compelling because they imply the weakness and passivity of the individual who is rendered powerless in the face of overwhelming strength. "Tank Man" is perhaps the strongest in this regard because of the stark contrast between the person and the tank, along with the historic connection to the Tiananmen Square Massacre. "Ultimate Confrontation" takes a different tack, but again utilizing the visual juxtaposition. The soldiers are representatives of the government, however, it is the power implied by the rifles and, particularly, the bayonets that draw the eye. A blade is far more rudimentary and implies visual repercussions. Opposing them is a child holding a chrysanthemum, the symbol of flower-power innocence. "Taking a Stand in Baton Rouge" is much simpler in perspective but the symbolism is stronger. Evans can be seen as completely vulnerable, with riot police looking almost futuristic. More than that, police have implied motion in contrast to Evans' complete immobility, even serenity. This was taken on July 9, 2016, following the shooting by police of Alton Sterling in Baton Rouge and has become in part emblematic of the Black Lives Matter rallies.

In contrast, images of riots show strongly implied motion and are designed to shock, depicting actions in the moment. For this reason, they are often featured in news media. Balza catching fire, protesters injured after being rammed by the car, and stoning the tram are all visceral because we intuitively step into the scene captured in the moment. We empathize with the situation and sense what it would like to be there. Their power is in the moment, but as a result, they can lack the visual cue for an overarching theme. That still makes them strong photos, but without the keen direction — and ultimately enduring quality — that "protest-style" photos may have. That's not to say that shocking photos can't be iconic; "The Burning Monk" and "Saigon Execution" clearly are, however, their purpose is in the moment, rather than into the future. All of which suggests, the next time we see photos of a protest and riot, try to think of the underlying themes and what they mean rather than the immediate moment.

An interesting and thoughtful article - thank you.

"It is all too easy to idealize a social upheaval which takes place in some other country than one's own." - From Edmund Wilson's To the Finland Station: A Study in the Acting and Writing of History

Wilson was writing about the age of revolutions, beginning in France and ending in Russia, but the same could be said of riots in any other community but one's own.