Cruise to the Bahamas With Concert Photographer David Bergman

Concert photography is probably one of the most appealing genres to shoot for any photographer. When I first picked up a camera, the only thing I wanted to photograph was my favorite bands as they played live. Our good friend and Canon Explorer of Light ambassador David Bergman is launching a pretty unique live workshop called Shoot From the Pit that will not only let you work side by side with David himself but also shoot a variety of artists as they perform live.

David Bergman is one of the most well-rounded photographers I know. His career started off primarily shooting sports for the Miami Herald and Sports Illustrated. During this time David's work was featured in dozens of high profile publications, 13 Sports Illustrated covers, and he even received the coveted Sport Illustrated Super Bowl cover back in 2010. After perfecting his craft as a live sports photographer, David Bergman began exploring more commercial and editorial ventures by shooting athletes and celebrities both in the studio and out on location. This quickly led to more and more music and entertainment work including working with Joss Stone, Avril Lavigne, Barenaked Ladies, Evanescence, Gloria Estefan, and My Chemical Romance.

Back in 2010 when Fstoppers was just launching, David was at the beginning stages of his relationship with Jon Bon Jovi. Fortunately for us, we were lucky enough to tag along with David as he shot Bon Jovi's final homecoming show at the MetLife Stadium in New Jersey. To this day, this experience is one of the greatest days of my life. Shadowing David around this concert really opened my eyes to how much effort goes into shooting a concert in an artistic way but also how much variety you can get when you have more access than just shooting 3 songs from the pit.

Since then, David has not only become Bon Jovi's personal photographer (shooting over 200 shows in 30 countries), but he has also become one of the top educational instructors in the entire photography industry. David was named a Canon Explorer of Light in 2015 and also teamed up with AdoramaTV for his Two Minute Tips with David Bergman. To top that off, David was also picked as a co host photography judge for the reality show Top Photographer with Nigel Barker.

Shoot From the Pit

Recently David launched a new photography educational workshop called Shoot From the Pit. In a nut shell, this live workshop lets students shoot side by side with David himself as he teaches some of the best techniques he has learned shooting bands in some of the most difficult of shooting environments. What's also cool is Canon is sponsoring a lot of the gear you can use so you can test out some of the most useful lenses and cameras even if you do not already own them. Here are some of the topics covered in these workshops are:

What's cool about this workshop that I haven't seen anywhere else is David gives you unprecedented access to the artists themselves and allows you to create portfolio images live on location. With many live workshops, you often learn from the photographer themselves but rarely get to put their tips and tricks into practice in a real world situation. Depending on the workshop and venue, you will get access to different parts of the stage, pit, and facility so you can create one of kind images without being confined to one single location. Having shadowed David myself during our Bon Jovi video above, I can't put into words how exciting is it to have this sort of access and film awesome imagery that very few people would ever be able to capture. If you are a music fan and love photography, this is sure to be an experience unlike any other.

For more information about David's upcoming workshops including a cruise to the Bahamas with Pitbull and Pat McGee's Down the Hatch Festival in the Outer Banks of North Carolina, head over to David's Shoot From the Pit website.

Sports / February 15, 2012
[Fstoppers Original] Behind The Scenes With Sports Illustrated

/ August 8, 2021
I’m Tired of Gender Inequality and Sexism in the Photography Industry. Are You? 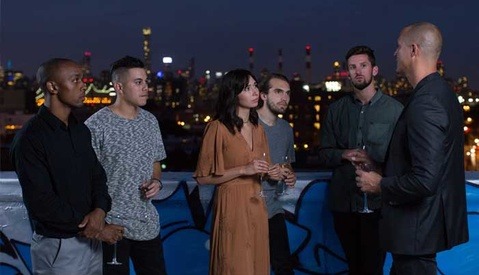 This is a dream workshop!
i wish i could join :-/