Genius, Madness, and Obsession: How the Instant Camera Was Invented

You could be forgiven for believing that the requirement for instant gratification is a rather new affliction. However, it's more likely that swift results were gated behind technology and that the few inventions that provided it were well placed for unprecedented success, like the instant camera.

The invention of the instant camera is a landmark in photography's rich history. While credited to Edwin H. Land, the inventor of the Polaroid camera and co-founder of the Polaroid Corporation, there was somebody who beat him to it, albeit not a commercially available instant camera. Samuel Shlafrock invented the first instant camera as early as 1923, which sounded like the perfect premise for an article in itself — the unsung hero of instant photography — but my research ended as quickly as it began. Every single reference of his work I could find repeated the same sentence (taken from Wikipedia) or a variation of it: "The earliest instant camera, which consisted of a camera and portable wet darkroom in a single compartment, was invented in 1923 by Samuel Shlafrock." It's a shame his story appears relatively unknown, and if you can shed any light on it, please send me an email!

Who Was Edwin Land?

Edwin Land has a story of innovation echoing that of more modern tales in business. Growing up in Connecticut, he was known to have an obsession with dismantling technology and experimenting. Throughout his life, he was famed for his eccentricities, having allegedly embarked on numerous research "marathons." He is said to have needed to have been brought food and reminded to eat or he wouldn't, and once, while researching commercial production of polarizing film, wore the same clothes for 18 days straight.

This familiar blend of genius and madness led him to study physics at Harvard University, only to drop out in his freshman year to pursue his interest in optics — a lesser-known Harvard drop-out turned elite. It was during this time that he invented inexpensive filters capable of polarizing light, which he named Polaroid film. It wasn't until a few years later, however, that he united with his Harvard physics professor, George Wheelwright III, to work on commercializing the technology. As Wheelwright III's name suggests, he came from money, and his family agreed to fund his joint venture with Land, the Land-Wheelwright Laboratories.

Land-Wheelwright Laboratories had some success with their polarizing filters, for use in both photography and sunglasses, and this lead to funding from Wall Street investors to expand. The company was then renamed to the Polaroid Corporation in 1937, and the next 10 years were spent developing and honing all manner of technologies, from optics to smart bombs in World War II. Then, an innocuous comment from his young daughter changed the course of photography.

While on vacation in Santa Fe with his family, Land's daughter asked why she could not see the picture he took of her immediately. It is said that within the hour, he had the rough concept of the seminal SX-70 and later discussed the idea with his patent attorney. After three years of research and development, the Land camera (pictured above), was ready for its debut to the Optical Society of America in February 1947. This camera had self-developing film, also manufactured by Polaroid, and could produce sepia prints in just shy of one minute. I cannot explain the workings of that prototype any clearer than the Wikipedia description, so here it is:

The photography developing process, invented by Polaroid founder Edwin Land, employs diffusion transfer to move the dyes from the negative to the positive via a reagent. A negative sheet was exposed inside the camera, then lined up with a positive sheet and squeezed through a set of rollers which spread a reagent between the two layers, creating a developing film "sandwich". The negative developed quickly, after which some of the unexposed silver halide grains (and the latent image it contained) were solubilized by the reagent and transferred by diffusion from the negative to the positive. After a minute, the back of the camera was opened and the negative peeled away to reveal the print.

The Model 95 was the first Land Camera — and indeed the first instant camera — to be made commercially available, going on sale to the public in November of 1948. Many business gurus will warn you of the type of mistake Polaroid made next, though it didn't seem to affect Polaroid too adversely. After manufacturing 60 Model 95 units, 57 were put on sale at the Jordan Marsh department store in Boston. Polaroid had predicted that the number of units and film they had sent for public sale would carry them through to completion of the manufacturing of the second batch; it did not. All 57 units and all film sold on the first day.

From here, there were new instant cameras made that switched from the two-roll method of the Model 95 to Pack film. This involved the photographer having to pull the film out once the picture was taken and peel the positive from the negative after a set amount of time. This is also where the square format Polaroid film was first introduced. Though there were several cameras after the Model 95 — and ones like the Swinger in 1965 — it wasn't until 1972 that their most significant instant camera would be released. 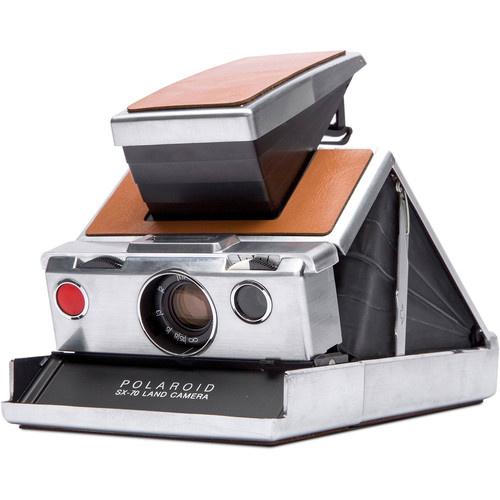 The SX-70 is undoubtedly one of the most iconic and important cameras ever to have been invented. It brought with it the third type of film, using Integral film instead of Pack, which was a square format, contained all of the components needed to develop the film, and was quicker to develop whilst leaving no residue. The camera itself was spectacular innovation with its folding SLR design. It aimed at being the most portable (by being able to be folded down) and the easiest to use. There was no requirement for pulling the film and peeling it, the SX-70 simply ejected the finished article and you had to merely wait for the image to fade in.

Land announced the camera at Polaroid's annual company meeting in April 1972, where he unfolded the camera from his suit pocket and took five pictures in ten seconds — something no previous instant camera could come close to. The camera was put on sale nationally by the third quarter of 1973, and despite its high price for the time of $180 and $6.90 per ten pack of film ($1,088 and $42 in today's money) they sold just shy of 700,000 SX-70s in under six months.

The SX-70 has proven iconic over the years and is still popular nearly 50 years after its initial release, with both Polaroid and retailers selling refurbished original SX-70s, albeit they seem to be almost always on backorder!

The Unlikely Phoenix of Today

The story of Polaroid and thus instant cameras, for the most part, gets darker from here. Poor decisions, a lack of the innovation they were famous for, and myriad mistakes led Polaroid to bankruptcy and woe. However, the company lives on today after several acquisitions (and another bankruptcy or two), and we have seen an unlikely but pleasing event: the rising of the instant camera from the ashes.

Instant cameras have proven popular in recent years with the rise of Fujifilm Instax, Kickstarter projects, and even Polaroid themselves climbing back into the fray. The main barrier for these reasonably low-cost, fun cameras is the same as it has always been: the cost of film. Polaroid ceased making instant film back in 2008, but they have restarted now that they are owned by the 2017 hit, Impossible Project, which aimed to recapture the love of instant photography. It was successful, then it bought the intellectual property rights to Polaroid, then it changed its name to Polaroid Originals, and now, it's just Polaroid — a rather roundabout way to what I'd say is the right end. Polaroid had lost its spark, and now, though it's really just Impossible Project with Polaroid's name and inspiration, it's all the better for it.

I have used a number of instant cameras over the years, from Leicas through to 1970s Polaroids, and I still enjoy them. In fact, my girlfriend and I take our instant camera to any key events or special days to capture on instant film. It's difficult to explain the charm to anyone who doesn't already have the urge to try it, but it's a singular and tactile experience I would wholeheartedly recommend. Here's to Edwin Land, his passion-cum-lunacy, and the Polaroid phoenix that has risen.

Lead Image by WI-Photos, used under Creative Commons via Wikimedia.

Film Photography / November 14, 2013
The Discontinuation of Fuji 3000b Instant Film by Fujifilm

Does anyone know the story of the color photograph he made with a red filter, a green filter and a sodium vapor lamp? Was it the genesis of his color film?

There is a reason why you didn't find any reliable sources for Samuel Shlafrock's earlier invention of the first instant camera. He didn't. The Wikipedia entry cited a patent (US1559795A) and was added by an anonymous IP editor in 2010. While likely added in good faith, the two cameras aren't comparable. Shlafrock's primitive camera had a box containing developing baths for the chemicals, and required the operator to pour these in each time a photo was taken. The operator, with a sack over their hand, inserted the sensitive paper, mounted it, took a photo, manipulated the paper within the box and baths, and then extracted it later. And the result was a *negative* print.

From a patent alone, we have no idea whether such a camera was ever manufactured. It seems unlikely as there is not much demand for negative prints, nor for cameras with baths of toxic chemicals splashing about inside. Land's genius was to produce a positive print, quickly and easily, and to combine the film and print and developing chemicals.

Wikipedia no longer makes the claim about Shlafrock. It is quite possible others had clever ideas about portable developing boxes, though clearly none took off until Land's invention.

I own a Chicago Ferrotype Mandelette camera from about 1916 that is a camera containing developing chemicals in a tank below the camera body..much like 'Afgan street cameras' do

Thanks Mike. I've googled both of these and added some links to the talk page of the Wikipedia article on "Instant camera". These seem worthy mentions in the history of "instant" photography, unlike Shlafrock who perhaps managed to do nothing more than patent some variant.