Panasonic’s mission was to create a Micro Four Thirds camera that would have a compact design, have the ability of easily connecting to smartphones and tablets to drop media files and start editing, and feature a robust set of creative tools to elevate photo taking and video productions at all levels. From these goals, the LUMIX G100 was born. The new camera, which will be known as the LUMIX G110 outside of North America, is aimed at hobbyists and vloggers in both key features and price, but it still comes with a few new technologies and specs never seen on any LUMIX camera before it.

Beginning with the basics, the LUMIX G100 measures in at 4.55 x 3.25 x 2.13 inches (115.6 x 82.5 x 54.2 millimeters) and weighs 14.53 ounces (412 grams). It uses a Micro Four Thirds mount which for starters is compatible with 65 lenses between the Panasonic and Olympus lineups, plus more third-party options. Inside, the LUMIX G100 has a 20.3-megapixel MOS sensor with no optical low pass filter and a Venus Engine image processor. Outside, the 3-inch free-angle rear LCD monitor sports a 1.84m-dot touchscreen which is thinner than the GH5 and 1.4 times brighter than the G90. The 3.68m-dot viewfinder has a 0.73x magnification and is 2.8 times brighter than the G90, plus the LCOS (liquid crystal on silicon) chip is 4 times faster.

The LUMIX G100 uses contrast-detect AF and can autofocus as low as -4 EV. Panasonic claims the camera can autofocus under starlight without the use of an AF assist light or other external lighting. The AF system has been improved overall for greater accuracy over previous models, according to Panasonic.

Panasonic partnered with Nokia to integrate their OZO Audio technology into the LUMIX G100. The onboard microphone is actually three microphones, and they have some new tricks. An industry first, the microphone pickup has a Tracking mode which is linked to the field of view and incorporates face recognition into its noise canceling algorithm to isolate speaking subjects. Surround mode is to be used for conveying the atmosphere of a location, Front mode will act like a shotgun mic and also benefits from smart noise canceling, Back mode is for narration from behind the camera, and Auto mode will automatically switch between Tracking and Surround.

The LUMIX G100 features a sound recording level display for monitoring (the camera does not have a headphone jack), and level adjustments between -12 to +6 dB, plus Auto and Mute modes. There is a 3.5mm microphone input.

For improved stability in video shooting, the camera has 5-axis hybrid image stabilization that can be set to Low, Standard, and High modes. As an effect of the electronic stabilization, there will be some cropping of the frame as the stabilization mode increases strength.

It can record up to 4K resolution in 30p and 24p or Full HD at 60p. The V-Log L gamma profile will be included with the camera at no additional cost. The camera can also shoot time-lapse video as well as Full HD 4x/2x slow motion and 8x/4x/2x quick motion video.

Helpful video options include a Rec Frame Indicator which is a red box that surrounds the entire frame to easily see if the camera is recording, and a Frame Marker to help frame compositions that will work as both video and stills. For example, shooting standard video for YouTube with a Frame Marker that displays an Instagram-friendly 1:1 aspect ratio framing lines on the screen. The LUMIX G100 will output video that was recorded vertically in the proper orientation without having to rotate later.

Selfie mode on the LUMIX G100 is automatically started when the monitor is rotated into its forward-facing position. Unless manual settings override it, this will cause the aperture to go to around f/8 for greater depth of field, turn on face detection autofocus and auto-exposure, and switch the sound pickup range to Auto.

As connectivity was one of the primary goals for the LUMIX G100, the camera features Bluetooth 4.2 and Wi-Fi (2.4 GHz) and takes advantage of the LUMIX Sync app with a dedicated “Send Image” button on top of the camera to transfer videos and photos to mobile devices. Smartphones can also be used to control the camera. Clean HDMI output will allow people to use the camera as a webcam with their own HDMI video capture device and streaming software.

In the United States, there will be two kit option to choose from.

Outside of the United States, there will be other variations of kits as well as being able to purchase the camera body only.

The new Tripod Grip accessory will be priced at $99.99 alone. It features a USB Micro-B connection to the camera and no battery will be needed to operate its shutter, video record, and sleep buttons. It weighs 3.59 ounces (102 grams) and is 5.69 inches (144.70 millimeters) in height.

The Panasonic LUMIX G100 will be available at the end of July 2020.

Gear / November 12, 2018
10 Years of Micro Four Thirds: A Look Back at the Panasonic Lumix G1, the Camera That Started It All

It has an M4/3 sensor. That's the same lens on my Panasonic GM5, which is even smaller than this. 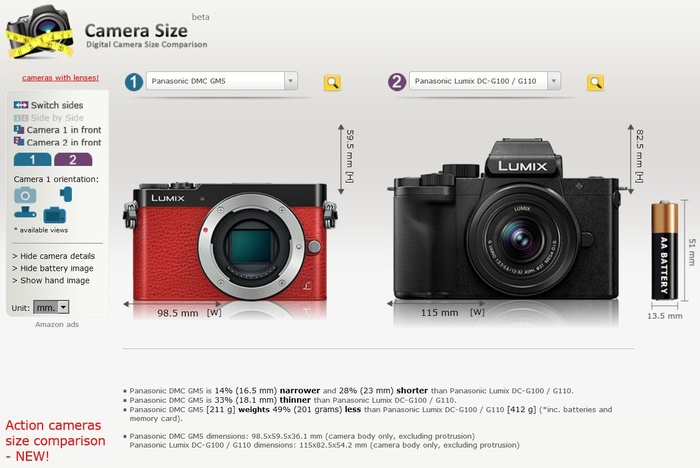 Maybe I missed it, but Fstoppers failed to mention this is a 1-inch sensor? What the heck? That's unbelievable.