A Portrait Photographer Takes Another Look at the EOS R, but That’s Not Why You Should Watch This Video

The Canon EOS R gained Sony-like AI Servo Eye AF with a firmware update earlier in the year, and now, photographer Manny Ortiz takes a look at how it performs. The short answer is that it’s definitely way better, and he says as much, but the real reason to watch the video is to see Ortiz in action on a portrait shoot. It’s fascinating.

Too many times, when shooting portraits, even in New York City, I get caught up in bringing my flashes, Fstoppers Flash Discs, and whatever other lighting modifiers and stands to get the photo I want. I end up being a pack mule, lugging several lenses and all that lighting gear with me, and I end up wasting more time setting up the shot than getting the shot.

Watching Ortiz work with precisely one light source that fits on his wrist (a Spiffy Gear Lumee RGB Light Bracelet) and whatever neon signs and illuminated billboards were available was refreshing. It’s a reminder to really look at light at a scene and work with what you’ve got. When he encountered a light that was not quite the right color, he used his bracelet to balance it out. When he needed a reflection, he found the sunroof of a car conveniently positioned between him and his model. It’s clear that he really sees what’s in his environment to make the most of it. Parking garage lights never looked so good.

He even was able to (without much convincing) get two passers-by to frame his model in between them by asking them to space themselves out and walk back and forth. A gutsy move.

Back on what the headline of his video was about, though: Ortiz was shooting with the Canon RF 85mm f/1.2L USM lens and said that the new autofocus features in the firmware update and the super-sharp optics of the lens combined to nail focus on the eyeball every time, even though the model in the video had long eyelashes.

That said, Ortiz says that both the lens and the camera still have their issues. The price of the lens, at north of $2,500, is a concern when comparing competing options (such as Sony’s FE 85mm f/1.4 GM lens is $1,800). And then there are still the pesky ergonomics with the fiddly touch bar.

None of these are revelations about the firmware, lens, or the camera, really. The reason you should watch this video is to see Ortiz in action, to watch the way he thinks. It might make you think about how you light your photos as well. 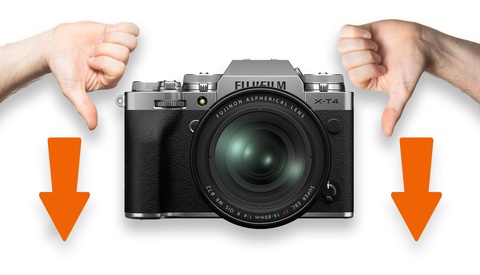 Gear / July 8, 2021
'My Camera's Not Good Enough' and 7 Other Stupid Things Photographers Say

With regards to the touch screen...

All I care about is to see RAW files. The video is interesting, but if someone wants to show something, really show the results or the video is pointless. I don't quite understand these teasing videos.

Plenty of CR3 files available all over the internet from the EOS R. Do a search for it.