After 16 typhoons, three landslides, two major road closures, a frightening earthquake, and countless near-misses, the ocean finally exploded into life for daredevil surfers in Kyushu, south-west Japan. I was there to capture it all with my Canon EOS R5.

As I drove up the hill and around the bend in the road that overlooks the ocean, I was anxious. I felt the nervous tension bouncing through my body and the telltale butterflies in my stomach. They always come when massive waves arrive in these parts and I go to shoot them. Actually, I don't go to shoot the massive waves, I go to shoot the surfers who dare to paddle out into the ocean's fury and ride those massive waves. I'm always nervous because of the energy, power, and furious explosions that these waves bring, and also because I want to do the surfers justice by capturing waves that can often be the best waves of their lives. This time was different, too. It was the first time this year that I could take out my Canon EOS R5 and Canon RF 100-500mm f/4.5-7.1 lens combination to shoot typhoon swells.

As far as typhoons go, plenty had come through Kyushu prior to this one — fifteen, in fact. Some had been ferociously powerful, too, like typhoon number 13, which caused landslides so bad that two major roads had to close indefinitely as well as the south-bound train line that runs parallel to the coast. Initial reports said it will take up to six weeks for the roads and the train line to reopen. Some of my coworkers now have to take detours to get to work, turning a thirty-minute journey into a two-hour journey — one way. Typhoons and natural disasters are part of life down here, but one bright effect is the mountainous swells that come in for surfers to ride.

Typhoon 16 was perfect. It sat far enough off the coast that it didn't lash us with torrential rain or cause any major damage, but close enough that it generated beautiful, groomed ocean lines that dared surfers to ride them. There are only a handful of places that can handle swells this size and two of them were inaccessible, so I went to the one I knew would be working. When I first pulled up in my car and raced to one of the few vantage points available, I was both excited and disappointed. Excited because of the size of the waves, but disappointed because there were only a handful of surfers out. When I looked across the bay to where the surfers always park, there weren't as many cars there as I thought there might have been. I soon figured out why.

In short, the surf was just too big and gnarly. Giant sets were closing out across the bay and offering no safety channel for the surfers to take refuge. As I watched wave after wave pulse through and explode across the volcanic reefs barely a meter beneath the surfers' feet, I realized that it simply wasn't safe enough yet to tackle with any confidence. One way I can always gauge the size of the swell and the waves that will break in the bay is to look at some of the outer reefs. They are always a good barometer for actual wave size and whether they're ridable or not. To do so, I put the Canon RF 100-500mm lens on my Canon EOS R5 and set the lens to 500mm. I didn't use a tripod because I was still unsure where I'd shoot from. When I fired off a few quick shots, the results weren't pretty. I'm not talking about image quality, I'm talking about the giant slabs of water mutating over the shallow outside reefs.

Still, there were a few brave warriors who had chanced their arm and paddled out, so I decided to shoot as much as I could. Unfortunately, I couldn't take up my normal position because of the salt and spray in the air. Normally, I like to shoot across the bay looking into the waves so I can see how open and steep they are when the surfers take off and fly down that initial death-defying slope. However, when the typhoons are still in full swing, the thin film of salt generated off the water's surface and the spray flying off the back of the waves as they break mean there's too much atmospheric haze to deal with at that distance. Thus, I set up from a more front-on position.

This meant that I couldn't use a tripod, as my vantage point was on top of a narrow strip of concrete immediately above the water. Not particularly safe to stand on with a tripod but I could sit down and shoot handheld. Fortunately, the EOS R5 paired with the RF 100-500mm is not too bulky or unwieldy and I had no problem shooting handheld for about 1.5 hours. That was already a win because there's no way in the world I could have ever shot handheld for that length of time with my old setup of Canon 7D Mark II with the Tamron 150-600mm f/5-6.3. That rig did a lot of great work for me over the years but it was monstrous and I always required a tripod. Shooting with my new mirrorless setup was far more comfortable so I perched myself atop the concrete and watched the surfers tackle the ocean's ferocity in front of me. 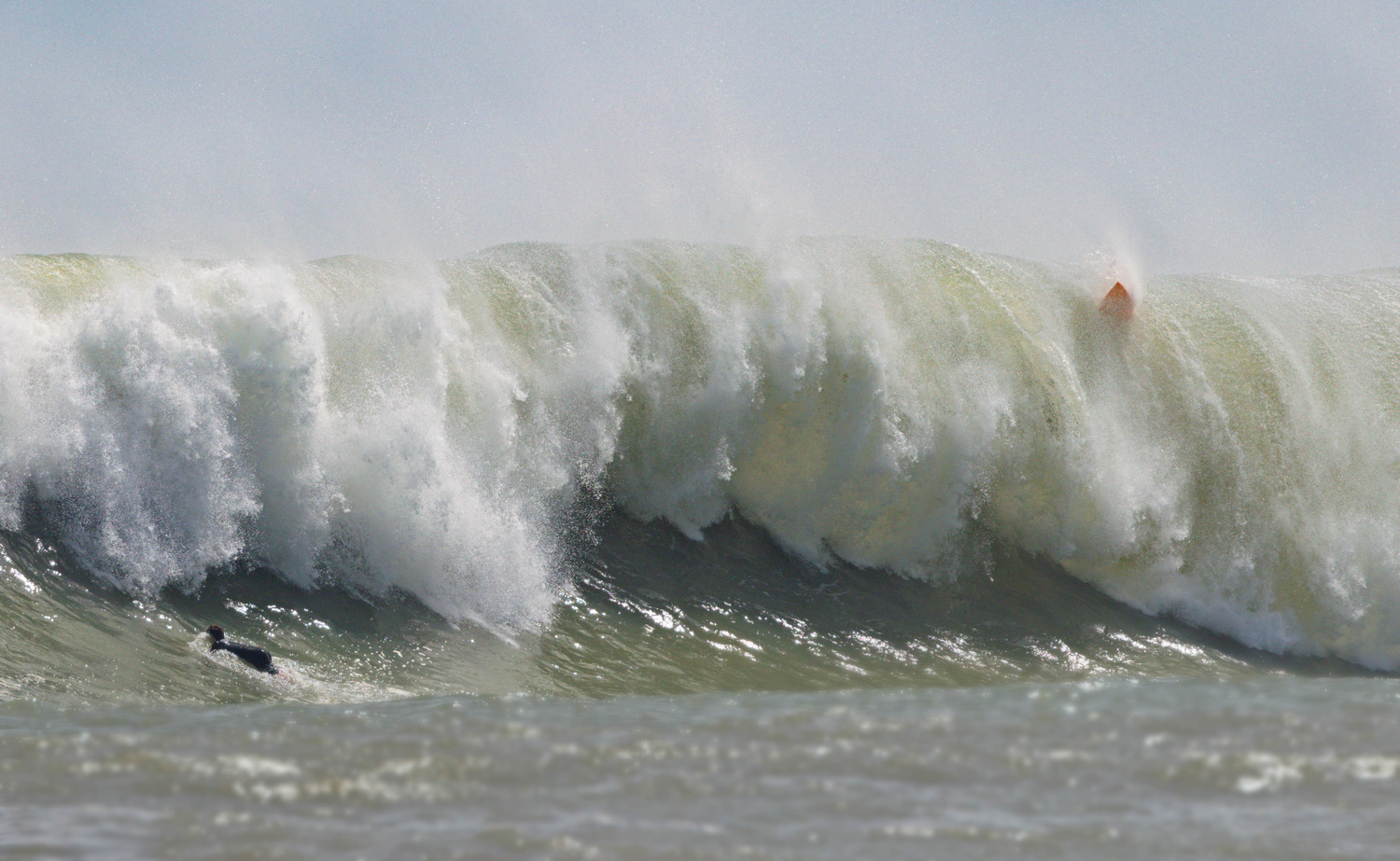 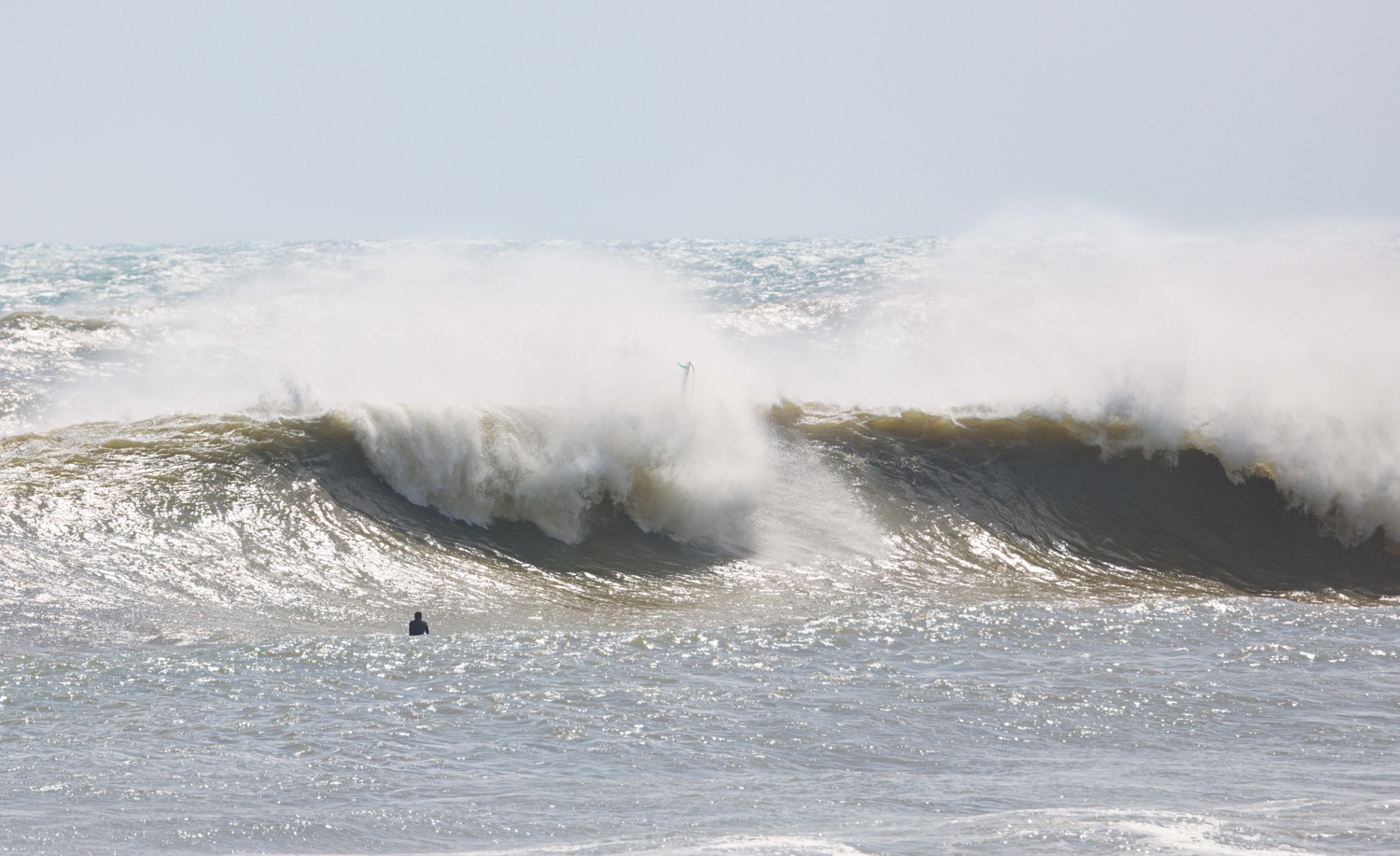 The first half-hour or so wasn't pretty. The surfers couldn't contend with the wind or the volume of water moving around them. This meant they kept getting caught out of position, resulting in some horrendous wipeouts. However, as they started getting their bearings a little more they also began to ride a few more waves successfully. Unfortunately, however, due to the low tide conditions and the resulting shallow water, the waves would close out quickly, very often on top of the surfers' heads. Though it was hard to watch, no injuries occurred and on a more positive note, the Canon EOS R5 and RF 100-500mm lens worked beautifully.

I set the camera to shutter priority in Servo mode and Human Eye auto-focus. The camera tracked the surfers beautifully and the only hindrance I got was all the aforementioned spray flying around. I was very pleased with the results, especially how easy it was to handhold. It makes life so much easier when you're trying to move position or swivel your body quickly. However, as the tide got too low and the water dangerously shallow, the surfers exited the water, mostly licking their wounds. I went home and rested before returning in the late afternoon.

When I returned, it was beautiful. The afternoon sun was setting over the back of the mountains and the swell had subsided somewhat. That allowed me to shoot across the bay from my favored position, which I think really captures the wave and the environment much more enticingly. From the very first wave I shot, I knew I was onto a winner. This time, owing to the extra distance I had to cover across the bay, I add a Canon RF 2x extender to the RF 100-500mm lens. It only works once the lens is extended to 300mm and beyond, so all these shots were taken between an effective 600mm and 1,000mm. I used the same settings as the morning session and again, the human eye-auto focus worked seamlessly in perfectly tracking the surfers as they rode the waves. It was honestly a pleasure to use, as I knew I could focus solely on composition and let the camera do the rest.

What I also love with the Canon EOS R5's image quality is that when you zoom right in to check a shot, you can clearly make out the surfers. I could never do that as easily before. This allowed me to ride the waves vicariously with so many guys I often share the water with, which was a wonderful experience. For example, my youngest daughter is in the same class as Koji Katsumoto's daughter, so we often share barbecues and beers together and talk surfing. To see him here, below, taking off on an absolute bomb was almost as thrilling for me as it was for him.

It really was quite exhilarating to handhold the Canon EOS R5 with a 2x extender and shoot at an effective 1,000mm and come away with so many crisp, clean keepers. For instance, I later saw this wave below of Masaki Kobayashi on video from a videographer who was shooting on the same day from a similar angle. On video, I barely noticed the thickness of the lip above his head or the poise of Masaki in such a critical situation, but the EOS R5 and the Canon RF 100-500mm lens with 2x extender froze the moment and all the intricate details so beautifully. 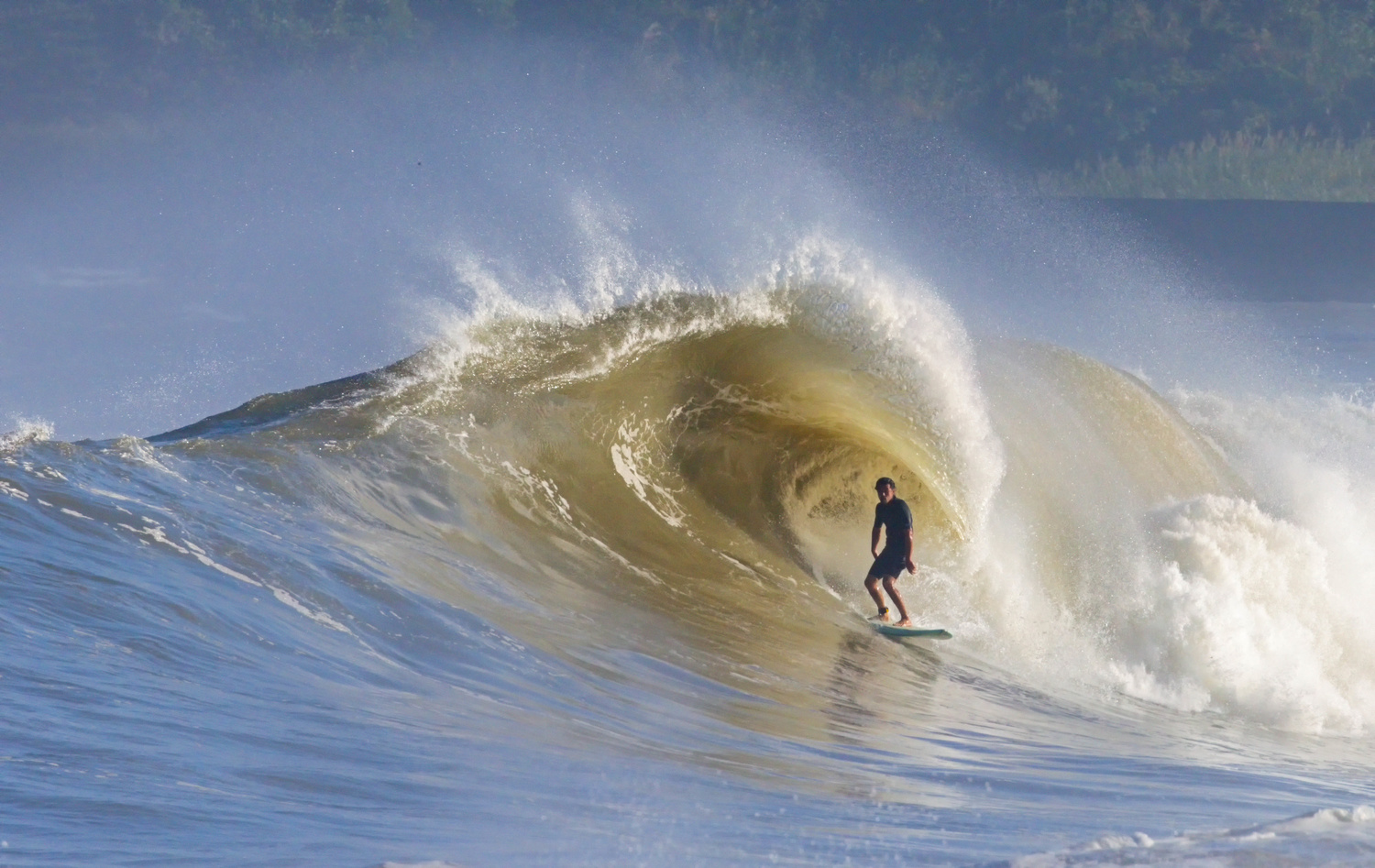 I ended the day with as much adrenaline pulsing through my veins as I started the day, though it was a different sensation. In the morning, I was anxious for the surfers and also nervous about how my camera and new setup would perform. By the day's close, many of my friends had surfed the waves of their lives and my Canon gear had done everything I'd bought it for.

Please let me know your thoughts or shared experiences in the comments below. 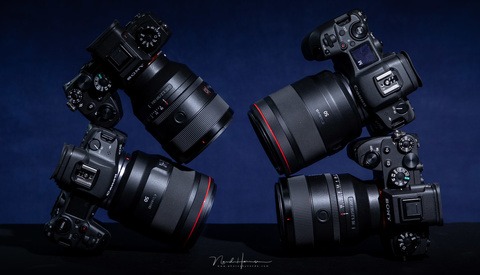 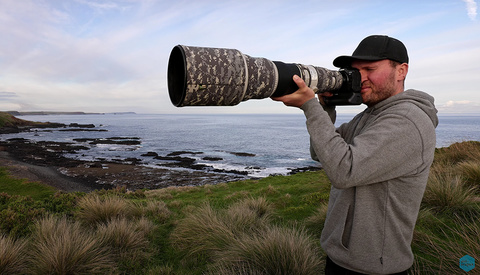 Awesome to see how this all worked out. Sounds like it was a lot of fun.

It only breaks like this once or twice a year so being there to get it is very rewarding. Sometimes I have to work on that day or am otherwise busy so I get a big kick out of spending an entire day shooting this