ISO performance on cameras has improved exponentially over the last decade, and now you are able to use higher values than ever before more or less without punishment by way of noise. Sony's new videography titan is raising that bar even further it seems.

The Sony a7S III has been tremendously well-received thus far, hitting many of the markers the consumers and prosumers alike were hoping it might. But one area that is particularly impressive on the new body is its low light performance.

Sony's official stance is that the a7S III doesn't have dual native ISO, for all intents and purposes, it does. That is, it has ISOs above 100 that have noticeably improved performance and a reduction in noise. The "base" ISO values vary depending on the picture profile you are using, with S-log having a "high base" ISO of 12,800. That means that at 12,800, the a7S III will produce less noise than at 10,000 ISO for example.

In this video (which will require subtitles unless you speak Mandarin,) Bruce of SofaShiba Studio goes through specific tests as well as presenting a short film shot in 12,800 ISO and the results are frankly staggering. The short film at the start of the video I could have never guessed was shot at such high ISO; it looks cinema-grade.

That’s useful until you want to shoot video which is what this article and YouTube review is about.

I thought this was about stills and just now realized it's about video. Sorry m8.

(this is a Camera Conspiracies joke you thin skinned bastards)

Would be nice to re-watch this without Youtube's brutal compression for this particular video. Even in 4K there's so much banding and lack of fine detail.

He has a different opinion about low light performance
https://www.youtube.com/watch?v=KIGaQLvm1ec

"ISO performance on cameras has improved exponentially over the last decade" That is not really true. In fact that is not true at all because of "exponentially".

That said: The video above is about video exposures and not about photography and frankly said, it is a bad one. The lights of the vehicles render the whole pretty much useless.

For anyone commenting about the fact that there’s car lights in the scenes so it’s a useless test...

Go grab your current camera and shoot video at night (with a few car lights) at 12,800 ISO and see if you get the same results.

The whole idea of the test was to show the difference the dual native ISO (although this isn’t the official term for this camera as it’s not officially dual native ISO and Sony haven’t confirmed that it is either) against the other ISO values. Full disclosure, I have the A7siii and can honestly say it’s extremely powerful at that ISO, so balance this with aperture and with lighting (just like any other scene you shoot!) and you get a very clear image in comparison to other cameras in the same category.

I have a hard time to find any argument in your message. The title of this article does not differ between video and photography. I do care for photography and the A7 is a photography camera which added video capabilities. So referred to that the title is misleading and not true.
What you see in the video is the heavily processed RAW-footage. Sony did a great job here. - But if you'll compare the RAW photos of Sony's camera I'll bet it is, if at all, just a bit better than e.g. the D800 sensor performance. Just look at the screenshot below. Exposure raised by two EV. You'll see why the car lights do matter and you'll see that almost all details are missing. 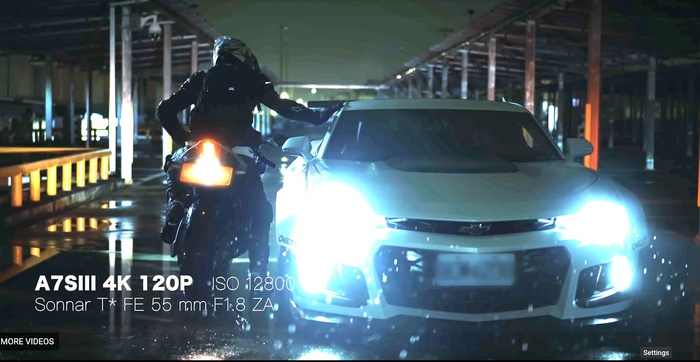 Hi Jan, I’m confused, a few questions if I may?

- How do you know it was shot in RAW?

- if it was shot in Raw then how was the 120fps achieved in some of the scenes, as RAW through the ninja v recorder can only capture 60fps?

- Taking a screen shot from a You Tube video to raise the exposure is an awful way of pushing a file to test its dynamic range detail in the highlights, it’s a compressed 8 bit YouTube screen shot that is not from the original capture, why did you use that as an example? The dynamic range was captured originally and colour corrected (which is normal for any video) then exported into a video file, then compressed to 8 bit when uploaded to YouTube, to then push the file from a screen capture is completely not the way of trying to demonstrate dynamic range of a video capture.

- How is the title misleading - the a7s series cameras are not known for their photography first capabilities, they’ve always been renowned for their video specs and low light capability?

- If the footage is shot in RAW then this isn’t an argument against its low light capability, as the RAW capture does not control the dynamic range of what a sensor achieves for capturing the dynamic range. If you were to mention the LOG formats that it shoots (SLog2/3) then that’s a different matter. The sensor is the sensor whether it shoots video in RAW or not and RAW does not increase dynamic range for video, it allows for more latitude in post production and the ability to push colours further and yes, control noise within the image. Without it being added in camera when shooting in the standard or log formats. The point of the article however is that at 12,800 ISO the sensor has a shift that allows you to capture video at a hugely reduced noise value.

I’ll say it again, I own the A7siii and at 12,800, it’s very impressive for video. It’s not a pro photography camera, I have separate tools for that and it’s not what the article is about and is in no way misleading as there’s a video playing right at the very top of said article, not photography examples.

- All light is gathered by the sensors cells, thus delivering RAW data. This data has to be processed, be it video or photo.

- Raising the exposure was not to show the dynamic range but the details, the texture of surfaces, which in this case did not show up. The car lights give the impression of a well exposed image. It is, but most of the scene is dark. If you take a look at the darker areas you always would see noise, even if you shoot at ISO 100. But in this case, there is no noise. But with the noise the details are gone too. So what we see here is NOT sensor performance. It is the result of algorithms to reduce noise. It is well done and for video it is perfectly o.k.

- Compare it to a dedicated video camera, e.g. Sony HXR-NX5R NXCAM and you'll realize the difference. The A7 is a photographic camera with video capabilities.

- I am not arguing against the low light capability as it is superb but expected 2020 and available since almost 10 years *). I am saying that the "mind blowing low light performance" is a gross exaggeration. The results are achieved not because of the so much better sensor (it is not) but rather the heavy processing.

That all said, the A7SIII is an impressive camera for photo and video. But the ISO performance (RAW) did NOT improve that much as the articles says. The data processing did as we today have much more computing power in such small housings than 10 or even 5 years ago.

*) There is achievement since then, e.g. BSI sensors. But that gain is minimal compared to what happened the years before.

Thanks for the reply, Jan. I agree with many of your points. Just a little note to say that A7s series (not A7 series) are designed and built to be more hybrid video shooter centric, especially this third version. Yes, they can take photos it so can a Blackmagic Pocket 4K camera, of course I’m not directly comparing the two, just drawing a comparison to both in terms of ability to take a still image.

I’m also still very confused as to why (as you sound like you are experienced in this field), that you would take a screen shot of a highly compressed image, from a YT video, to then push the highlights or or shadows to see if there’s more detail? This isn’t making sense to me, surely details are lost during not just one but two compression methods, on top of the fact that you’re editing a screenshot and then uploading that screenshot to another website? Adjusting the exposure is pushing an images dynamic range within the sensors parameters of what it’s able to capture, but to get the most from that you would do this using the original file. If I had the original video file and did the same to raise the highlight or shadow detail and placed this against yours it would yield different results, surely?

Your somehow right about the screen shot of a video. But there is not other way to take a closer look at it. One would do the same with photographies to check if noise reduction algorithms were working heavily in the darker areas. In this example, they did. Not for the bad! I just overexposed so my eyes could spot any structures better.
The compression of the video file leads to smoothing too. But again, there should be more visible structures than it is in the above video. Yes, if you post process a video and gain exposure while doing this would lead to a better result. The claim of this article is that the ISO low light performance is (exponentially) better. It is not, it is the post processing. That is all what I wanted to tell. I wouldn't mind the "missing" details anyway. The footage looks great as it is.
The A7s (s!) is some great camera. If I'd be into video and not already got a lot of Nikon equipment, I'd surely be very interested in it.