When the pandemic started, as a professor I had a plan to record all of my lectures in a professional-style studio setup with proper mics, lighting, background, etc. While it was mostly kids and life that got in the way of doing it that way, a huge factor was also the complexity of setting up all the necessary equipment to make it happen.

That’s why I wish I had thought about this kind of setup that YouTuber Chris Hau has set up to quickly and easily make YouTube videos. Like he showed by comparison, to make my educational videos, I had been setting up a tripod for my camera and a light stand for my lights (either a 2-foot softbox or a Yongnuo YN360 II Light Wand.) Then I’d figure out a place to hide my audio recorder or I’d use a set of Sennheiser EW wireless mics. Beyond the complicated setups for the tripods and lightstands, and the dance they did on the floor next to each other, even the simple act of putting a mic on myself using the lavalier microphones and checking audio levels would often encourage me to just give up and use a webcam.

That’s where the ingenuity of Hau’s setup comes in. Though, as he points out, it’s not a new idea to create a mobile, compact rolling YouTube recording/lighting setup, his video about the setup is remarkably detailed and gives you a step-by-step guide on how to set up one of these setups on your own. Instead of a tripod, light stand, and C-stand all taking up space on the floor, there’s one (one!) light stand on wheels with everything clamped onto it. That includes a camera, monitor, shotgun mic on a boom arm, and even the lighting. While I’m not much for the monitors (I usually just turn the articulated screens around) there’s a lot to be said for such a powerful portable setup.

Hau even goes so far as to suggest equipment that runs off battery power, which saves the clutter of wires everywhere. Even the choice of a microphone on a boom pole works well because you don’t need to mic yourself up and test levels each time if you just leave it set up. Wish I had thought of that.

So that’s Hau’s take on the all-in-one studio stand. I think I’ll be creating a custom one for my own needs, but this is certainly a great place to start.

Do you have your own ideas for this setup? Leave your thoughts in the comments below. 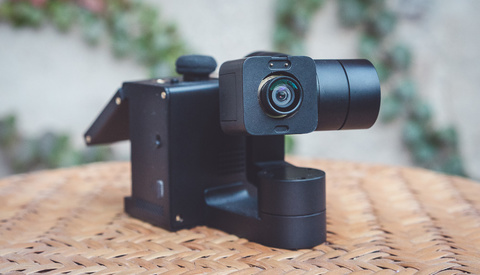 Gear / November 3, 2021
How One Photographer Designed and Built His Own Unique Vlogging Camera