What Were Photographers Shooting With in 2001?

Even just two decades ago, the photography industry was a vastly different place, and the sort of gear photographers used was quite different. This fun video follows a photographer as he discusses what was in his gear bag back in 2001.

Coming to you from Adam Gibbs, this interesting video features him discussing what he was using back in 2001. 2001 was certainly quite a different time, even though it was only two decades ago. Film still generally reigned king, and the digital revolution was only just beginning. In fact, Canon had only introduced the D30 (their first completely in-house developed DSLR) the year before, and the Nikon D1 had only been released in 1999, and both cameras only offered low-resolution crop sensors. It would not be until a few years later that digital cameras would outpace film cameras in sales and the digital revolution would really start to take hold. I remember that I was shooting with a little Canon Rebel film camera back then and still favoring Kodak Tri-X and Gold films. To me, digital was just a novelty, and I would not get serious about it until quite a few years later. Check out the video above for the full rundown from Gibbs. 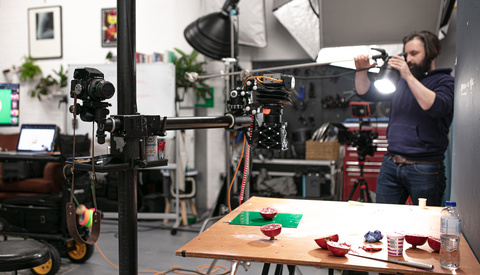 Gear / October 9, 2021
What Is the Cheapest Camera a Pro Photographer Can Use?

Gear / May 22, 2021
The Change From DSLR to Mirrorless Is Not Like Film to Digital
Premium Photography Tutorials

Canon EOS-1V Bodies with Velvia film. I still didn't trust digital because the first sensor I saw had artificial greens.

My first exposure to digital was in the late '80s. I used Nikon F2 then Nikon F3's with a number of prime lenses no zooms, 90% of my shooting was with Tri-x and the rest was slide film. Lugged around two cameras around my neck most of the time. I had a small Kodak point and shoot digital camera at some point as I was building a website for Dodd Camera in Cleveland and I needed photos. My first Nikon D70 DSLR in 2005 with a zoom lens I bought for some subcontract work.

Nikon F3 with various Nikon primes including the 85mm t/s. The ubiquitous Canon Q rangefinder. A Rollei SL 66 with various primes. And a Miranda Sensorex that I used with oddball lenses including a lens adapted from a Kodak vest pocket. I had a lot of fun. I still have the F3 and primarily use a Fujifilm X-T2, mostly with primes. I'm still having fun.

Still film back then but a couple of dalliances with digital. I had an Apple Quicktake 150 digital camera before that, which was a gimmick. First digital camera I shot was a Sony Mavica that recorded on floppy disks. Used it during Tiananmen Sq after martial law was declared, to shoot stills and send over a phone line back to HQ.

I had two Eos 3s and a gz645i from Fuji and I had to rent 6x9 MF cameras for jobs. And in personal or artistic work I would spend like twenty or thirty quid a week on film and processing. I bought a Ricoh gr1v in about 2003-4 as my last real film camera.

Minolta Maxxum series with quite a few Minolta lenses. Still takes great images. My first digital was a compact Canon G5 in 2002 or 2003. Some great photos were taken with that camera.

I was shooting QTVR virtual real estate tours and retail products with a cheap Olympus Camedia 700. Had a wide angle adapter and a nodal tripod head. CHEAP!

Interesting "blast from the past".

By 2001 I'd been using digital for 2, 3 years... But only a 1.5MP Olympus integrated zoom lens model w/terrific optics but poor everything else (and cost $900 in 1997/98). I used that for stuff that was going online only, but stuck with film for "serious" work, scanning the best of the 35mm images into 130MB TIFFs so the images could be digitally edited and printed.

Still have my EOS-3s and some film in the freezer... I often think about getting them out and doing some shooting. But never seem to get around to it!

BTW, I had the same 1 degree spot meter, mostly used for B&W, Zone System shooting. But also used incidence meter a lot... Even outside the studio (Sekonic 298... Still have it. Still accurate and no batterie req'd.... Today I carry a Sekonic 358. Mostly shooting sports or wildlife... Only an occasional landscape).

I keep hoping someone someday offers a 4x5" sensor/digital "film holder" (not cropped!) that I can use with the old Wista. I've seen some DIY portable scanner conversions... Limited usefulness, but still might try one.