Medium format cameras have become more and more accessible with regards to price and application. But which of the cheaper medium format bodies is best, and why?

I love medium format cameras. I won't waste your times or mine by arguing over "looks" or the benefits that can be had with them, I just love shooting on medium format bodies. My time with the two cameras in this video isn't evenly distributed however. I have used the Hasselblad X1D II 50C in brief stints (and very much enjoyed doing so,) where as I have used the Fujifilm GFX 50R for multiple full days of shooting.

There are a number of differences, perks and pitfalls for each, many covered in this video. For me, and many other photographers, the chief warning I would offer about choosing between these two is the ecosystem you're entering. Fujifilm have done well at getting medium format prices reasonably low both in camera body and lenses. Hasselblad have taken strides in a similar direction, but by necessity or by choice (I believe it's by choice, in that it makes them appear to be premium which they have always been,) Hasselblad are more expensive across the board. The X1D II 50C is over $1,000 more than the 50R, and essentially every single lens is more expensive than its Fujifilm counterpart.

I honestly find both Hasselblad and Fujifilm desirable and attractive brands, and I'd happily shoot with either, but in this rather specific comparison, the Fujifilm wins out primarily on a financial merit. It is also worth noting, as I have no doubt many medium format shooters would be quick to do if I didn't, that for "budget" medium format cameras, you have more options than just these two! 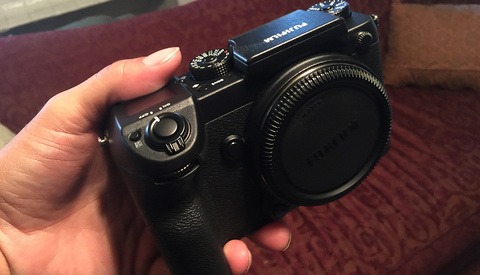 I’ve been looking at medium format seriously for about two weeks now, but not the Hassy. I’m looking at the Fuji of course but I like the form of the 50S, and I’m also looking at the Pentax 645Z.

The Fuji is nice and has lots of upsides to the system but I really like the Pentax and their lens selection compared to Fuji. I’m not in a rush so I have time to keep researching and pretty sure I’ll be renting the Pentax in a couple weeks time.

The downside for the Pentax is what are Ricoh plans for the system.

The Pentax 645Z looks awesome and from the sample photos I seen, "wow". It's too bad when companies sell out to another because they loose their heart and soul. Hasselblad has also recently sold a large chunk of their business to a Japanese company. Nevertheless, the Pentax 645Z would be a dream camera. Good luck.... P.S. I love the Chipmunk picture you took posing on a stump.

Pentax 645Z user here. I’ve had my 645Z for a few years and despite having newer cameras that have EVFs, I primarily it for my portrait/commercial work. The two lens I use the most are the 55mm and 90mm macro. Every now and then I’ll use the (older) 35mm. Out of all my cameras I’ve had, the 645Z has been my fav for its colors, hand ability and even for its size. Many times on set people have asked me about it. While it is an older camera, I’m dreading the day it craps out and if I’m unable to get another, I’ll most likely jump to Fuji’s (love their colors too as I’m a x100/XT and XE series user too).

I just ordered a 645Z and the 45-85 4.5 I'll probably order the 80-160 this weekend also and that should keep me covered for what I'm going to use it for. I have no doubt though when I see a good deal on the 400mm 5.6 I'll probably pick that up just to try a little wildlife with it, larger mammals and environmental portrait type shots.

Regardless of Ricoh's plan for the system I would certainly recommend the Pentax 645z since it is easily the most versatile compared to the Fuji or Hasselblad. It has better low light performance than either of those camera's. In Daylight the Fuji brand are excellent at producing pastel colors if thats what you are going after. However it you want a neutral file with extremely flexible range in editing its tough to beat the 645z. I find that it has way more accurate metering and skin tone rendering in difficult lighting scenarios.

Between them, considering the cost of lens, etc.., I'd go for the 50r. But if you want better DSLR like experience, it's 50s which is what I went for.