Here's an image made back in 2018 - the same evening as my quite popular sea stack image with the burning sky, The Howling Dog's Throne.

This one apparently slipped through the cracks and I decided to finally process it! I really loved how it turned out, so let me know below!

So have you ever heard of the Nah-So-Mah Tribe's story behind the Face Rock area? It's really something else!

I started looking into the origins of the sea stacks here and came upon a wonderful story of how they came to be (my badly summarized version):

As the legend goes, Chief Siskiyou and his daughter Ewauna were visiting the coastal tribes and a great potlatch was held in celebration.

Ewauna, who came from a mountain tribe and had never seen the ocean, wandered to the beach with her dog Komax, her cat, and a basket of kittens.

She danced and played along the shore and decided to go for a swim, not knowing of the evil spirit, Seatka, who was lurking below.

When he attacked Ewauna, Komax swam into the ocean, basket atow, and bit Seatka who kicked the dog out to sea.

Now Ewauna lies in the ocean, refusing to look at Seatka who sits nearby, with her beloved Komax and felines patiently waiting for her to rise from the waters. 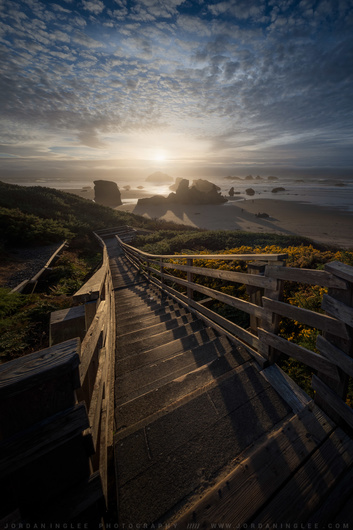