A to Z of Photography: Reflex Camera and Tony Ray-Jones

At pretty much three-quarters of the way through the alphabet we stop at R, an eminently popular letter, to look at the foundation of pretty much all contemporary cameras — the Reflex. This is followed by the inspiringly funny work of Tony Ray-Jones whose career was cruelly cut short.

The Reflex Camera is at first an odd name as, unless you an English graduate, it sounds like a knee-jerk response to being hit! However reflex also means to "reproduce the essential features of something else" (Google) which makes sense in the context of photography as it's a camera which shows the scene to be photographed as the lens sees it. This is in stark contrast to cheap 35mm point-and-shoot cameras which often had no viewfinder, or indeed the complex rangefinder system (such is used by Leica) which put framelines inside the viewfinder for different focal length lenses, correcting for parallax differences.

Perhaps a simpler definition would be to call it a WYSIWYG Camera — What You See Is What You Get! By my reckoning there are three solutions to this problem. The first of these is a bit of a fudge as it has two lenses side-by-side, a setup known as the twin lens reflex or TLR. The first, objective, lens is for exposing the film. The second lens is for the viewfinder system and has a reflex mirror that projects the image on to a focusing screen - this provides almost exactly the same image as the objective (but can't because it is offset). TLRs typically employed leaf shutters and enabled continuous viewing and focusing during exposure. Being mechanically simple, they were not expensive to manufacture. 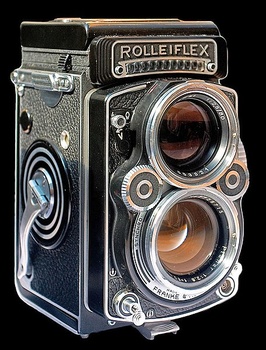 The second solution is to use only a single lens that incorporated a mirror box to view through the lens and so allow framing and focusing. This is the single-lens reflex or SLR. The first camera to employ a pentaprism viewfinder arrangement was the Zeiss Ikon Contax S in 1949. A pentaprism, in combination with the mirror, enables an image to be formed in the viewfinder as the photographer sees it, solving a major problem with SLRs prior to this. Pentamirrors offered a lighter setup but lost significantly more light through the optical path. The vast majority of SLRs used a focal plane shutter, although leaf shutters have been incorporated notably in to the medium format systems of Hasselblad and Bronica. Whilst SLRs solve the WYSIWYG problem, they make the camera larger, heavier, and mechanically more complex. The mirror system blanks the viewfinder during an exposure, limits the fastest shutter speed, and can introduce vibration during exposure. 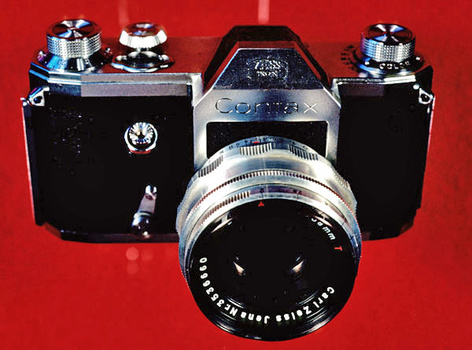 The third and final solution is a direct result of digital cameras and that is to send the image recorded by the sensor directly to the electronic viewfinder or screen and is known as a mirrorless camera (because it removes the mirror box). This is a genuinely good solution as you can make the camera smaller, lighter, more reliable, and (potentially) cheaper. Early incarnations suffered from poor contrast focusing but this has largely been solved through the use of on sensor phase detection. The ability to see the live image means focus aids such as zebra patterning and focus peaking are possible, along with real-time exposure and depth-of-field. The trade-off is that the camera has a much greater reliance on electronic systems which means increased power consumption. As the mirrorless bandwagon really starts to take-off, camera manufacturers are reliving the CD boon years of the music industry. Yes, we have had a format change which means large swathes of photographers are buying their lenses all over again! 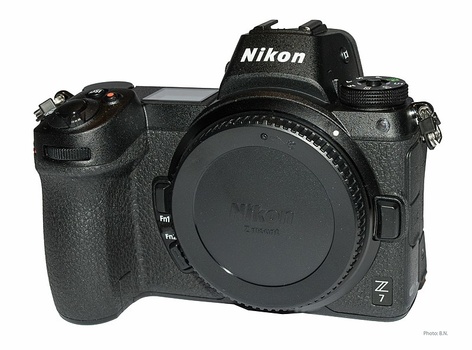 Tony Ray-Jones was a British photographer who firmly sat within the documentary genre, but began his education (like many of his UK contemporaries) at the London School of Printing where he studied graphic design. However it was a scholarship to Yale (aged 19), on the strength of his photography, that flipped him more toward the artistic use of photos. It perhaps seems strange that documentary photography and art can be close-knit bed fellows but this was something Ray-Jones pursued, although today we might categorize him more in the vein of street work.

It's important to remember that this was 1960s America with the likes of William Egglestone, Gary Winogrand, Vivian Maier, Robert Frank, Diane Arbus, Helmut Newton, Robert Mapplethorpe, the Family of Man exhibition, and Elliott Erwitt to name a few. It was also a time of the cold war, the Bay of Pigs, the space race, and a public that gorged off the visual feast presented to it by the likes of Life and Harpers Bazaar. The old guard had given way to post-war prosperity and a new swathe of envisioning young photographers seized the photographic opportunities and developed them further. The 'decisive moment' of Cartier-Bresson had been replaced by the 'every moment' of Winogrand.

This was the thrilling environment that Ray-Jones found himself parachuted in to which began a prolific decade of photography. During his undergrad years he visited Alexey Broidovitch's (of Harpers Bazaar) Design Lab and got to know a number of street photographers such as Joel Meyerowitz who developed his interests. Graduating in 1964 he returned to a markedly different UK where there was a distinct lack of interest in non-commercial photography. Using his street photography skills he began documenting the "Englishness" of everyday people, however it was his ability to get in to the "realness" of the subject using ironic humor that was new and inventive. He carved out, and exploited, a niche which had largely been ignored. Often described as a social-anthropologist, he again showed that providing a viewer with a new way of seeing the world creates success. Incorporating humor doubly so.

Contracts, finances, and life led to Ray-Jones returning to the US in 1971, however he was diagnosed with leukemia in 1972 and died shortly after returning to the UK for treatment aged 31. His book, A Day Off, was published posthumously. Take a look at his photos as they might just delight (Hyman Collection and some of his architectural work).

Wayne Quilliam and the Queen

Gear / August 11, 2019
A to Z of Photography: Shooting Sex and Strip Photography

"The first, objective, lens is for exposing the film, but has a reflex mirror that projects the image on to a focusing screen. The second lens is for the viewfinder and provides almost exactly the same image as the objective."

Absolutely right! That got lost in translation when writing up and now correct! Thanks for spotting