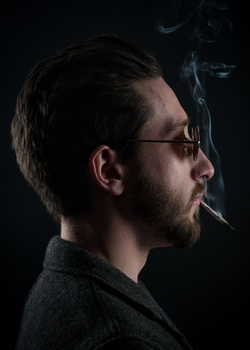 Attended a party my good buddy was throwing. I had a roll of seamless in my car and a couple strobes from a shoot earlier that day so we decided to throw up an impromptu portrait booth. This is one of the less hilarious results.

One 47" octabox placed in camera right slightly above his head. A white bounce was placed under his chin for fill.
One strobe with a silver reflector was placed camera left behind his head for a kicker.