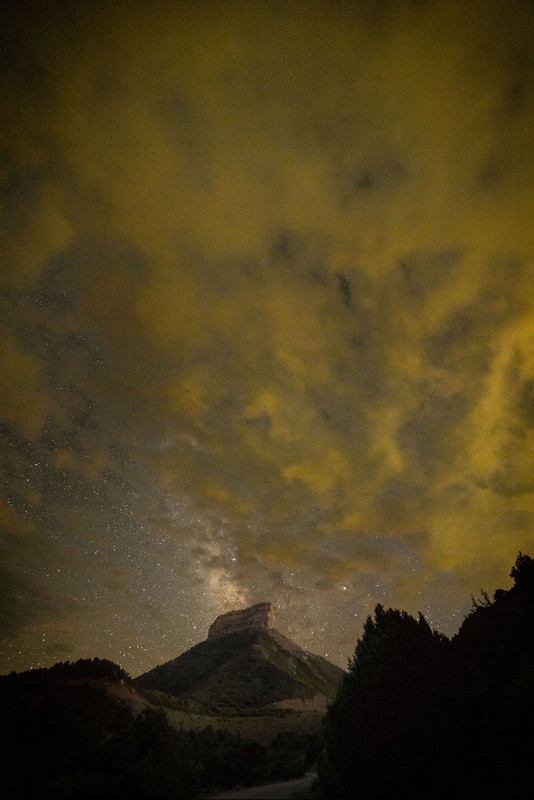 Our original intent was to capture the Milky Way as it spanned the sky behind the iconic landmark at Mesa Verde National Park. We scouted the location the afternoon before, and arrived before sunset to set up the composition and capture an image of the mesa just after sunset. This would provide the detail for the mesa in the final image.

As the sky darkened, we expected the clouds to dissipate, and did a few test exposures to check the Milky Way. The clouds never let up. In fact, they thickened as the evening wore on. It was then that I realized that the clouds, reflecting the lights from the nearby town of Cortez, actually made a more appealing composition than the mesa and stars alone.

The Milky Way peeks from behind the clouds at the bottom of the image, hinting at the majestic sky behind.

The images were stacked and adjusted in Photoshop, and the mesa was composited from several exposures. The highway down the mesa stays fairly busy until after ten p.m. or so, and there were several frames with light trails from the cars that we edited out.

We went back the next night and captured the Milky Way without the clouds, and while seeing the galaxy edge-on rising from behind the mesa is magic, the image with the clouds remains our favorite, and a reminder that you should always go out to shoot, regardless of weather and conditions. You never know what surprises await you.

Bud Simpson
Cabin In The Aspens
0