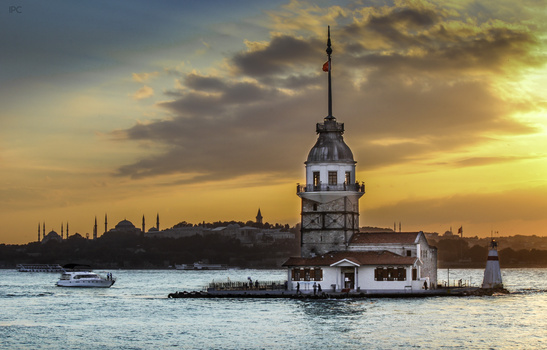 The most popular legend of the Maiden’s Tower is about an emperor and a fortune teller. The Byzantine emperor had a much loved daughter who was eternally precious to him. One day, an oracle professed that she would be killed by a venomous snake on her 18th birthday. The emperor took it upon himself to do whatever he could to overcome the oracles predictions and vowed to protect his daughter from death. The emperor had a tower built in the middle of the Bosphorus, believing that if she was away from the mainland, no snake could come close to her. He surmised that his daughter would remain in this tower until her 18th birthday when they had defied her promised death. The only visitor that she would be allowed would be her loving father.
As a gift on her 18th birthday, the emperor brought her a basket of exotic and sumptuous fruits. Delighted that they had been able to prevent the prophecy, his daughter reached into the basket, salivating and desperate to eat the delicious fruit. Just as she placed her hand in the basket, an asp that had been hiding among the fruit bit the young princess and she died in her father’s arms, just as the oracle had predicted. There have since been no sightings of snakes on the islet, but the Maiden’s Tower keeps a basket of fruit on a table by the entrance as a stark reminder of the fateful legend that bestows the place. (https://www.turkeyhomes.com)