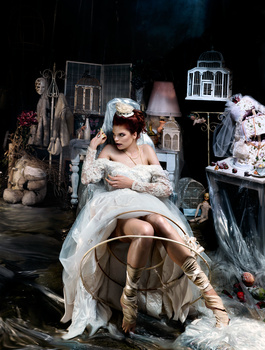 A number of years ago, I met artist, illustrator and fashion designer Lang Leave (aka Akina), known for her quirky and slightly sinister style of depicting fairytale characters. We immediately clicked creatively and wanted to collaborate...

However, time went by and nothing eventuated - we were both busy, caught up with our own careers and other projects. Eventually, Lang collaborated with one of her friends, milliner Sivear Ung, to produce amazing little hats based of Lang's character Liliput. When I saw those I flipped out - they were inspiring. So I got back in contact with Lang and we decided to cast a model, go to a forest with the hat and shoot for a few hours. Nothing too elaborate.

A few weeks went by and again nothing happened. So we decided instead to meet in person - Lang, Siv and myself - and plan something out. At this meeting we started talking about Lang's other characters and how we could build a story around them, settling on the good Liliput and the evil Snow White (both of whom had nifty head pieces designed and Sivear). Suddenly, from wherever it is that insane ideas strike from, I got this image in my head of an almighty clash between Liliput and Snow White. I could never shake that image - it set the tone for the entire project, became the crux point of the story and was eventually realised in the image the series is named for - The Clash!

I brought on production designer Pia Leong, and soon it snowballed into this fantastical, storybook narrative.

Snow White is a twisted version of her traditional self - an evil witch with echoes of Mrs Havisham who broods in her rotting lair and reflects on her days of glory. She hoards whatever she can find to add to her collection, but none of it makes her happy. Liliput, on the other hand, is a traveling mage - the archetypal good witch who wanders the woodlands with her animal companions and lends a helping hand wherever she's needed.

The story goes thus - Liliput passes the lair, and Snow White, being the greedy sod that she is, decides to abduct one of Liliput's animal companions to stick on display in a cage. Liliput discovers this treachery and enacts marvellous revenge, imprisoning Snow White in the very same cage to meditate on her failure.

There was never any focussed attempt to embed deeper themes within the series, nor try to illuminate an aspect of humanity. This was pure fantasy - a whimsical flight into the imagination, subtly ridiculous and hopefully something that would engage with the 5yr old in all of us, gazing upwards with wonder in their eyes.