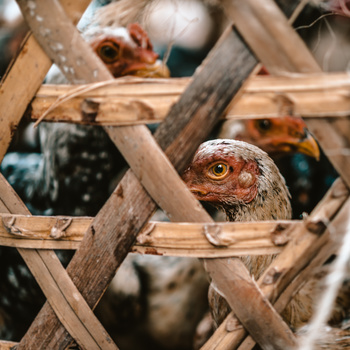 The Eyes of Life

This chicken was doomed. I was walking randomly through the streets of Stone Town, Zanzibar when I came across a man holding this wicker basket with a few chickens and a rooster in it. He was trying to sell them. The rooster was poking his head out the top, and that's the original image I stopped to capture. It turned out exactly as I wanted it, but I took a few more images of the basket, including this one. But since I captured the one I had in my head, I didn't think about this particular image for quite some time. I'm glad I came back to this trip and discovered this one, because I think it's just as compelling.
By now I imagine these chickens are already part of the circle of life, but I'd like to think I captured their likeness.