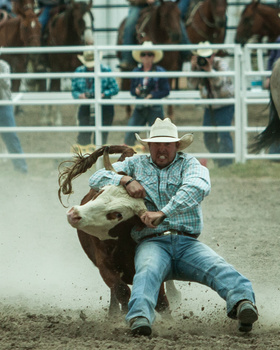 Dust and dirt are kicked up as a cowboy attempts to wrestle down a 300lbs steer at 20mph at Cheyenne Frontier Days in July 2014.

The rodeo is the largest rodeo in the world and lasts 10 days as both cowboys and livestock are rewarded for their performances.

In order to take this photo I lined up opposite of where most of the photographers opted to be stationed. There was a photo pit offered to credentials photographers with a backdrop of the main grandstand. I instead opted to be stationed in the cattle chutes to be closer to the cowboys. As a result, the photo pit had such a distance from the the acts and grandstand that even with low DoF their backgrounds were still in focus because of the distance relationship. Because I was closer to the acts, but further from the the crowd I had a much easier time separating my subjects from the background and being able to get an opposite angle shot enabled me to get photos of the steer wrestling head on.