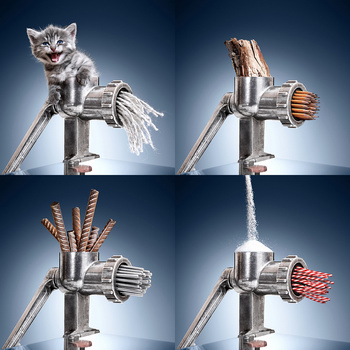 I dunno if it's ok to post 4 photos like this here, but as the title states - it's a series and I just thought that posting it as a whole makes more sense. Hope it's fine :)

Anyway, now the original idea belonged to my father (you may get an impression that I don't have my own ideas by now, since all of them were suggested by other people, but it's not like that, I swear! :D). We've ended up with 4 versions of the same concept.

Oh, and I should probably add - no animals were hurt during the shoot. No, really, the kitten was never even near the thing (and wouldn't fit, cause she was too big :D), I just got really lucky with the expression.

The whole series took me roughly 2 days to shoot and composite.