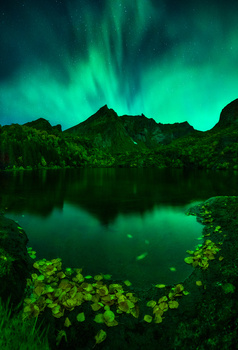 The Aurora Borealis captured on a calm and clear Autumn night in the great Lofoten archipelago, Northern Norway. I did a rather spontaneous trip to Lofoten for a few days to capture the season change in this amazing area of Norway. I had the luck on my side because a G1 solar storm was predicted to hit the earth during these days, which would increase the Aurora Borealis activity.
During the day I scouted this area and if it would have potential for night shoot with the Aurora - it defiantly had! So I went back during the evening, as I packed out my equipment the light on the sky started to show up! This was just the beginning of an incredible night. The Aurora kept on dancing on the sky from 8pm to 3am.
Since I've had prepared for this location I had a more technically shot in mind. I usually just take one capture with the whole scene but in this case I went low and close the edge of the water with the camera. Just to capture the beautiful Autumn leafs, perfect for an interesting background. From here I did 8 horizontal shots upwards which I've combined in my post process to create a vertical panorama out of the 8 horizontal captures. The result of this is just remarkable and I'm really happy about this photo!

You are a rockstar 😊