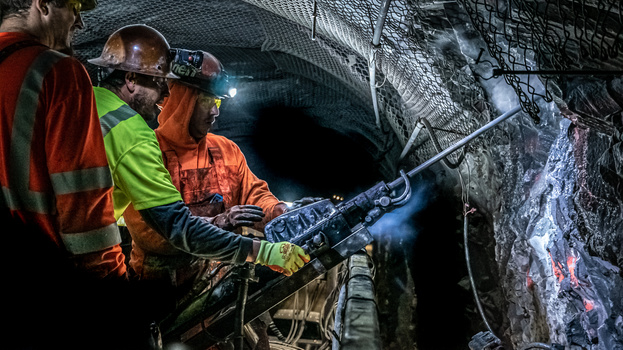 When the Drill Bites

I took this shot up at the Whittier Tunnel Project in Alaska. The tunnel is 2.6 mi long, services a train and cars (one direction only at a time – with up to 30 min wait). The team was drilling into the walls and ceiling to install drip pans. The gentleman in green, Jake, was a foreman who has spent his career tunneling – and was there to help train and guide the drill crew. Just before this shot, they were struggling with the drill bit bouncing on an angular piece of rock. He came over and helped out, and just got it drilling. You can see the "yeaaaaah" in his face as the drill bit in and started boring it's hole, and the concentration of the other drillers in orange.​

The light was very low, and difficult to capture a clear image with the longer shutter time. I took several, tried to hold very still, and was able to get a few that were crisp and clear. It is neat how the photo looks with the extended shutter. The colors are pretty vivid, and the texture is neat. Also their headlamps happen to be illuminating the wall and drill which helped with the shot. The guys were excited to have a photo taken of them and asked if I could get one of them into our company's newsletter. Part of our observation is filming and reviewing the work (like old sports teams) with the crew and leaders to see where we can get better. While those cameras run, I try to take some shots with my camera. I feel like it is something cool I can give back to the crews so they can show their families what they do and work on. They really love it, so I keep shooting. It also helps them open up to me a bit and talk about the project and struggles they face or ideas for improvement.​
I was at this project as a Six Sigma Black Belt with our Continuous Improvement department to observe work process, waste, ergonomics, and meet with the project engineer at the end of a few shifts to discuss what we think we can improve to make the project more successful and the work environment better for the crews. Also, we were testing an exoskeleton on some of the other crew members who were installing the all-threads and hardware you see in the ceiling – and eventually the drip pans to guide seepage to the walls of the tunnel rather than onto the cars and train that use it. ​