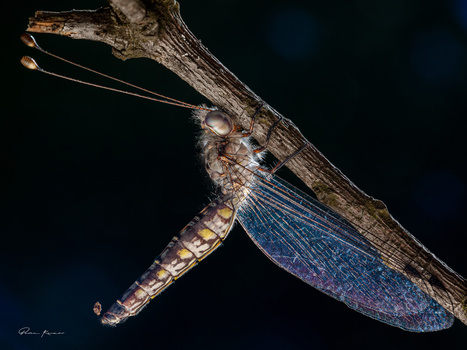 I was shooting critters with a 55-300 lens with a raynox dcr 250 on it, and came across this beautiful owlfly, resting on a twig. Shot a couple of images, of only half of it, thanks to the minimum magnification (It starts at a bit more than 1:2, and this one was slightly bigger, requiring lesser magnification). I wanted a full body shot of it, so how do I make it happen? Had stumbled upon a similar situation the previous day when I was shooting a pretty large green lynx spider with kill, and that is when I realized that I could shoot many images, and stitch them to one, later in LR. Have we heard it somewhere? Of course, Brenzier!!
This fine morning, gave my second flash to my friend Jinke, for the backlight and then started shooting four images, to be stitched later. It was a very difficult task to maintain the same focal plane, hence shot multiple images or one area, with the hope that one of them would be in focus at the least.
This is the result. Shot with a Pentax KS2, diffused flash with diy diffuser and another bare flash with diy snoot for backlight.