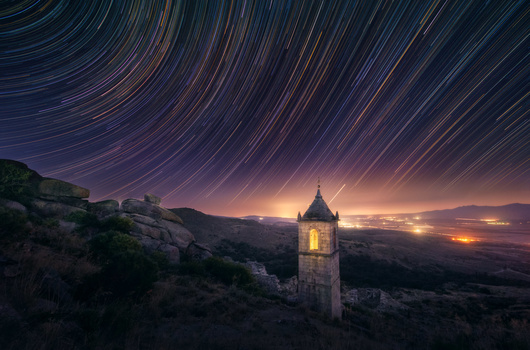 Two weeks ago, two days before we left for Cabo de Gata, I was lucky enough to be able to go with one of the big names in nightlife, Ivan Ferrero.

I was really amazed by the technique he had on the field, without hesitating at any time, besides the control lighting and thanks to that, I got the light from the tower and the window in the shot.

We were in the part of the Solana of the Sierra de Avila where the ruins of an old convent are located.

There previously photographers that I admire had taken out real wonders of the area and we had to try our luck.

Although the arch of the Milky Way was a bit high you could still get it out well, so it was the first thing we did as soon as we got a glimpse of the galactic center. This time I took my main camera (a Sony A7RIII) with which I made the Way and also took my second body (a Sony A7) which I left making a Star Trail, with the help of Photopills I was able to coincide the celestial equator with the tower of the Monastery and this was the result.