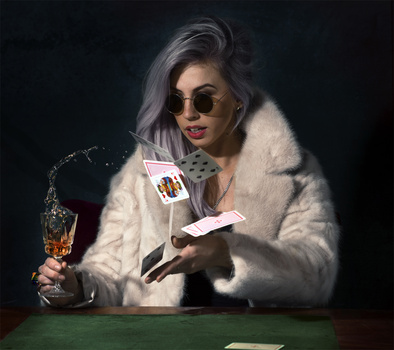 This is a shot that was so unexpected, we sat down by the table, tossed some cards in the air, some ginger ale and just wasn't feeling the idea we first had in mind. But then later, browsing through the photos we got from it, it was quickly realized we had a golden shot amongst the other seemingly flat photos.

We just needed the perfect splash of ginger ale, which we had in another couple of shots. Believe it or not but the cards were perfectly tossed in the air so the only photo stitching is the splash from the glass.

Shot with a single speed light upper left and a halogen shining straight down on the table (not hitting the subject) to get that green on the table lit up properly.