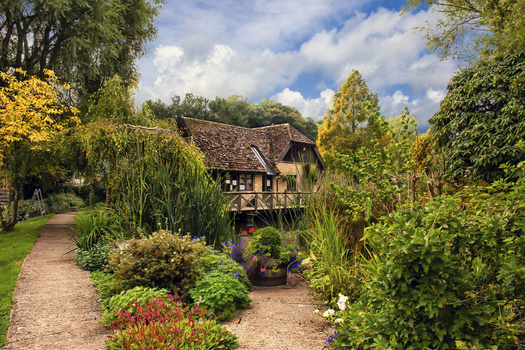 The Village of Bibury 3

Bibury is a village and civil parish in Gloucestershire, England. It is situated on the River Coln about 6.5 miles (10.5 km) northeast of Cirencester. A picture of Bibury is seen on the inside cover of all United Kingdom passports, making it the most depicted village in the world. The village is known for its honey-coloured seventeenth century stone cottages with steeply pitched roofs, which once housed weavers who supplied cloth for fulling at nearby Arlington Mill. Until the 1980s, that building also housed the museum of Arlington Mill with a collection of period clothing, before it was shifted to Barnsley House. The Mill is now a private residence. Bibury is particularly visited by Japanese tourists. This is largely due to Emperor Hirohito having stayed in the village on his European tour.