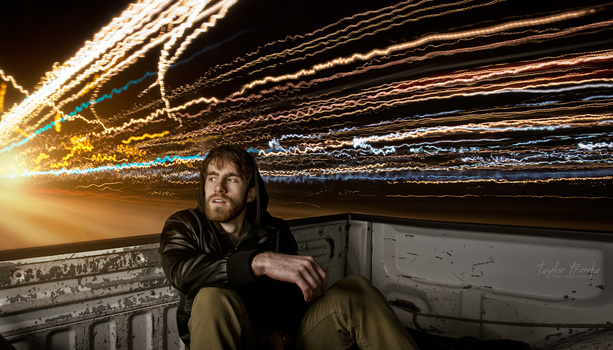 This was a massively fun shoot! It was also unplanned, which oftentimes lends to the experimental process.

Setup: Camera mounted with Manfrotto Superclamp to side of pick up. Tethered to computer inside the cab so we could change settings, primarily exposure length to experiment with light trail lengths.

Take 1: We stuck my friend in the back and drove around a bit, hoping the external flash would drown out his movement after a several second exposure and render a reasonable sharp photo. Fail. With my flash set on its brightest and stopping the camera down a bit to keep the foreground dark we weren't able to cover up his bouncing around.

Take 2: Composite. We removed him and drove around some more taking some trails in Kansas City. We then drove to a dark location and without moving the camera we posed him in the back and shot the second image. This is the result of blending the two together.

I've done this from inside my car with the tripod in the center console while driving myself. I like this setup in the truck bed.