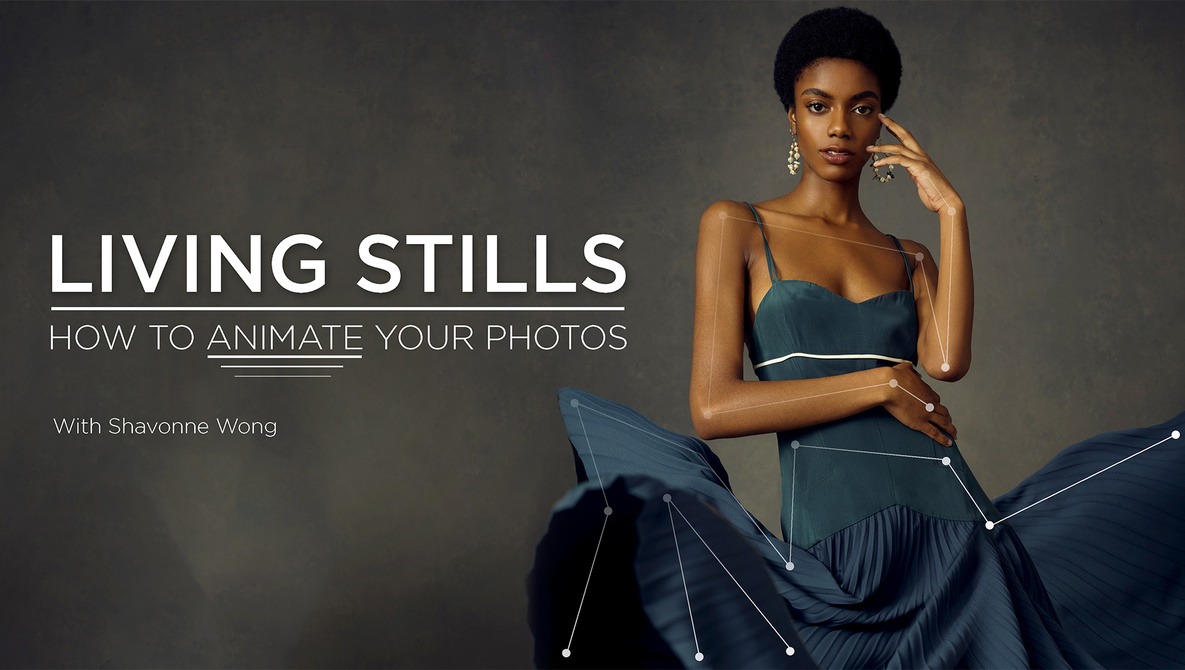 Living Stills: How to Animate Your Photos

This two-hour tutorial covers all the basics of how to animate your images into living stills.

This video tutorial includes
$89.99
Back to Store

As much as we'd all like to believe our photography has a signature style that immediately stands out to those who would hire us, the truth is that it's often difficult to catch people's attention when there are thousands of images being posted to social media every minute. In order to succeed as a photographer, you must first capture someone's attention effectively. Shavonne Wong recognized this when she innovated her process of living stills.

What Are Living Stills?

Many photographers are familiar with cinemagraphs, where photos and video are mixed into one final piece of media. A living still is different. Instead of mixing stills and video, Shavonne takes only still images and then animates them in post-processing to create a slightly surreal and very eye-catching movement within her photos. When you look at her portfolio, it's impossible not to be caught up by the living stills interspersed alongside the rest of her work, and as you know, when you grab someone's attention, it's more likely you'll be at the top of their mind when they consider hiring a photographer.

What Does This Tutorial Cover?

Shavonne starts this tutorial on set with a model to cover the basics of shooting a living still and how to plan ahead to make the animation process smooth. She will briefly cover camera settings and her light setup, but if you're not confident with the basics of lighting, shooting, or retouching portraits or fashion images, you may want to start with Shavonne's other tutorial, The Fundamentals of Fashion Photography. Shavonne shoots two sets of images with the same model, one 3/4 body and one close-up, and demonstrates different elements of the photograph that can be animated best.

Once she has all the images on set, Shavonne opens up Capture One to cull her images and Photoshop to show a brief look at her retouching process before she prepares each image for animation. She'll walk you through her vision for the final living still and then cut out various parts of the image to save as PNGs. Once the files are prepared, she moves into Adobe After Effects for the biggest portion of the tutorial.

Many photographers may be unfamiliar with After Effects, and it may seem daunting to open up brand new software, but don't worry, Shavonne sticks to the basics and walks you through each step of the process. You'll be able to practice and replicate everything she's doing with the companion files that will be part of your download, and by the end, you'll walk away with enough experience to start animating your own work.

One of the most exciting aspects of Shavonne's innovation is that it's new to the industry. Shavonne has utilized this technique for her fashion and editorial portfolio, but the same techniques she teaches could easily be applied to a wide variety of photography genres. The results are effective. Shavonne has gained new work as a direct result of the living stills in her portfolio. There's no doubt living stills will catch people's attention and make a portfolio stand out.

Hi There, would you be able to follow the tutorial if you have Apple Motion rather than after effects?

Hi Tony,
You may be able to do similar things in Apple Motion but the tutorial is really designed for After Effects users.

Making Real Money The Business of Commercial Photography
With Monte Isom
$299.99
Check out all of our tutorials at Fstoppers.com/store