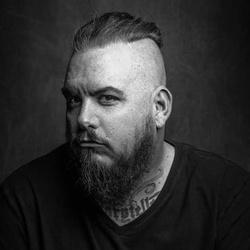 Chad Michael Ward is a photographer, filmmaker, storyteller and entrepreneur.

Growing up on a steady diet of Star Wars, Godzilla, Dungeons & Dragons, Marvel comics, Pink Floyd, and Led Zepplin in a small Northern California town during the 70s and 80s, Chad burst onto the burgeoning digital art movement of the early 90s as an album cover artist for dozens of American and European heavy metal rock acts.

At the dawn of the new millennium, Chad continued his climb, deftly merging nerd culture with the rock music and erotica scenes of modern day Los Angeles to develop his unique brand of dark fantasy-themed fine art photography. In 2004, he brought this vision to Marilyn Manson, photographing and designing the rocker’s “Lest We Forget” album and the music video for the single “Personal Jesus”.

Not content to stop there, Chad moved into the world of filmmaking and directed dozens of music videos for legendary musicians Berlin, Billy Idol and Slash. He also contributed cover art to best-selling YA novels “The Vampire Diaries”, “Secret Circle” and the dystopian smash-hit “The Hunger Games”.