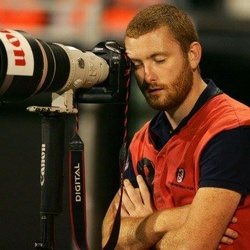 I am award winning photographer who specialises in Sport and has been travelling the globe covering assignments over the past 12 years for Getty Images, Action Images and as a freelance.

I have covered some of the biggest, most prestigious events in the sporting calendar including The FIFA World Cup, The Olympics and Paralympics, The Pan-American Games, Wimbledon, The Ryder Cup and many World Title fights in Las Vegas and around Europe.

More recently I have been working closer with commercial clients whilst still keeping an eye on the editorial side of the industry and have shot for clients such as Nike, FIFA, UEFA, The FA, Adidas, Puma, Reebok, British Airways, BMW, Land Rover, Coca Cola, Pepsi, O2, HSBC, Burton Menswear and many more.