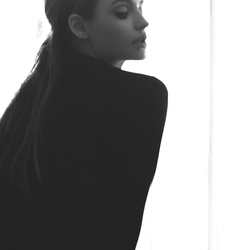 Born and raised in Costa Rica, I was a nerdy kid in high school who started using the family's cheap point and shoot to do away with the shyness. Mostly lucky chances and a lot of hard work helped me build my portfolio and develop the vision I have today.

I was blessed with a chance to study using a grant and chose a small Mid-West American University with campuses around the world. Having an estranged family member in Vienna, Austria, I started my International Relations and Media Comm degrees there and made my way like a gypsy to the main campus in St. Louis, MO.

After graduating in 2010 and returning to Costa Rica in early 2011, it wasn't until July 2011 that I became fully committed to photography with a focus on Fashion and Commercial aspect of it. This decision came easy and clear after the boss of the ONG I was interning for died suddenly. I was then taken under the wing of one of CR's best international models (covers in Elle Asia and Shape) to develop the portfolios of the models in her agency. It was Bali Rodriguez who took my hand and thrusted me into the world of fashion photography.

In the past three years since I started this crazy journey, I have had my work used in some of the top model agencies around the world and I have enjoyed a wildly eclectic client list that keeps expanding. Photography has overtaken my life steadily and I'm obsessed with capturing the beauty in human nature.