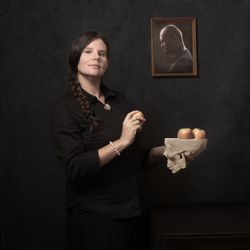 Nicole Wells
The Tudor and the Tulip
0

Nicole Wells
A Stitch in Time
0

Nicole Wells
At the End of the Day
0

Nicole Wells
The girl with the Lace Collar
0

My primary interest in photography is as a form of fine art. I love using it as a visual medium to express what I cannot say in words. Photography has also become a way for me to create something lasting, a legacy that will hopefully still be here for future generations to enjoy.

I was a contestant in the ABC's Photo Finish, where I got to photograph an Australian celebrity, Actor Vince Colosimo. I've also placed in the Sydney Royal Easter Arts show, 2nd in 2012 and a Highly Commended in 2011. I've also been invited to be exhibited in Add On in 2012 and 2013, which is part of the Australian Head On photography festival. Shutter Speed exhibition by Gallery Red in Glebe, hosted two of my images during the Head On festival in May 2013. I was also selected as a finalist for the Fremantle Portrait Prize in 2013.

In 2014, I have received 3rd place in the photographic portrait section of the Royal Easter Art Show. Head On selected me to be a finalist in their competition, which has led me to being in group exhibitions in Sydney, New Zealand, China & New York. My image was also featured in the New York Times, in an article about Photoville. I was declared winner of the Photography & Digital Media section in the Gosford Art Prize & have also been selected as a semi-finalist for the Moran Contemporary Photographic Prize. I've still got so much to learn and I hope to learn more as part of this community. I've lurked it for so long and only got up the courage to try it today :)